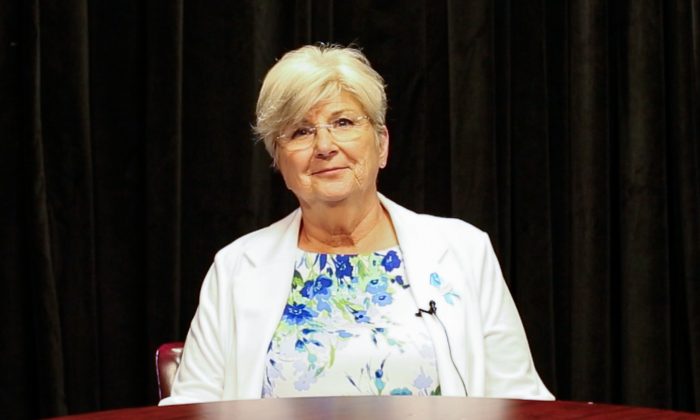 Jan Wagner shares her journey of taking in her grandson when he was 2, because his mother was addicted to opioids and unable to take care of him, in Washington on May 15, 2018. (Charlotte Cuthbertson/The Epoch Times)
US Features

An Easy Decision, But a Tough Road for a Grandparent Caregiver

WASHINGTON—Jan Wagner never got to experience the “empty nest” syndrome that so many parents go through as their children fly the coop.

She had her own children early in life and, at 50, she was already looking forward to grandchildren.

By 57, she had her wish six times over, with an unexpected surprise: She had also become the legal guardian for her 2-year-old grandson, Holden.

More than a decade ago, before the full opioid crisis swept the nation, Holden’s mother became addicted to prescription painkillers provided by a pain clinic, in what Wagner calls “legal addiction.”

“My youngest daughter was married and had a little girl, and when that little girl was about 2, [my daughter’s] addiction to painkillers became quite obvious,” Wagner said.

“So she left when her first child was 2. And she left the child [with the father]. And five years later came back, expecting again,” she said.

Wagner was worried. Her daughter, Mandy, had been couch-surfing with friends for years and was unemployed most of the time.

“When she told us she was expecting again, we were afraid that memories of her past child that she had given up would come back, that maybe she would go into some depression, she would have trouble parenting, trouble bonding. And her relationship with my grandson’s father wasn’t very stable,” she said.

Wagner encouraged Mandy to move home to Ludington, Michigan, for more stability—which she did, on and off.

“My grandson was born and she would come and go. She would take him with her during different relationships, sometimes she would leave him with us for a few days,” Wagner said.

But the addiction was growing, Wagner said.

“She had pretty much gone beyond just using medicine for pain and using it more or less because she needed it.”

When Holden was 18 months old, Wagner suggested to Mandy that she leave Holden with them, and when she established herself, she could come back and get him.

Wagner had talked to child protective services about getting assistance for her daughter and for her and her husband.

Wagner said she was told, “‘You really don’t want to get us in your lives. You may lose track of your grandchild if we have to put him in foster care, or the first thing we’ll do is call his mother and tell her to come and get him. And if she stays here in town, we can keep track of her because it’s a small community, but if she goes back to the city then it’ll be pretty hard to keep track.’”

“And so we obtained legal guardianship for him, which would prevent her from just showing up one day and then we wouldn’t know where he was,” Wagner said.

Wagner joined the approximately 2.6 million grandparents who are the primary caregivers for children in America.

Thirty percent (127,8oo) of children in foster care are being raised by grandparents or other relatives, a 6-percent increase since 2008, according to a report by Generations United in September 2017.

Those numbers are even more dramatic in states hit hardest by the opioid crisis, such as Ohio, which has seen a 62 percent increase in the number of children placed with relatives in foster care since 2010.

Dr. William Bell, president and CEO of Casey Family Programs, relates the opioid crisis to his experience in New York City during the middle of the crack epidemic.

“We even created a term called ‘skip generational parenting,’” he said at an opioid conference on May 15. “It was one of the first big efforts around grandparents stepping in and raising grandchildren.”

Casey Family Programs has a mission to reduce the need for foster care. Bell said at least 35 percent of the children entering foster care in fiscal 2015 was due to parental substance abuse.

“What we’re trying to do right now is a much more humane approach to dealing with families who are struggling with a disease,” Bell said at a Feb. 8 hearing.

For Wagner, the challenges were only just beginning.

“We soon realized that [Holden] had suffered some trauma effects from his early childhood,” she said. “And he required some special services that my husband and I were having a very difficult time providing on our own.”

Ironically, by taking Holden in rather than letting him go into the foster care system, most support services were unavailable to Wagner, as she was not a licensed foster caregiver.

“For kinship families like ours, there’s a lot of stress and confusion,” she said. “It becomes overwhelming and daunting, and oftentimes we become very lost.”

“Past trauma can’t be loved enough to make it go [away]. It takes patience, it takes work—hard work—it takes professional intervention, and it takes a lot of training,” Wagner said.

She said Holden had a lot of attachment issues because he had not bonded with his mother; he had developmental delays; and he was non-verbal at 2.

Wagner had to quit work so that she and her husband could focus on parenting Holden.

“It was a tough time because all our lives, we had worked. We’d supported ourselves, we’d supported our children, and suddenly we had to apply for welfare and food stamps and Medicaid because this child needed more,” she said.

“I have fought long and hard with the fact that if a child is not placed in formal foster care and the family is not licensed, then these services are not available,” Wagner said.

However, a new piece of legislation, passed in February, is providing hope to many kinship caregivers and parents who are embroiled in addiction.

The Family First Prevention Act is designed to keep children out of foster care and with family. It intends to bring help directly into the family home—including substance abuse treatment, parenting skills, and mental health services. If a parent needs to attend an inpatient addiction treatment facility, the bill can provide for any children to live in with the parent.

“It’s the first big step in over 12 years that I have been working with relative families,” Wagner said.

“If those services are coming to the home, where you live, where you act, where you interact, where you’re all together—I think it will make a huge difference. Because the first thing you do is ask the family to go outside the home, and then it’s harder.”

With all that she has learned, navigating her way through system after system, Wagner now does a lot of online support work with grand-families that are raising grandchildren.

“The only way that we are able to get out information to each other is through this sharing network,” she said.

She said Generations United has pulled together a lot of helpful information, especially because each state has its own method of handling relative caregivers.

“Some of the stories that I hear and some of the experiences that some of these families have had are just devastating,” Wagner said. “They’ve lost their children—they’ve died through overdoses, through murders, through lifestyles. I can’t imagine.”

She said over the years she has managed to accept her daughter for where she is.

“And I talk to a lot of families about just that. Stop fighting it. Stop beating yourself up. I took a lot of time thinking it was my fault,” she said. “Because if I decided it was my fault, and if I took that responsibility, that meant I could fix it.

“Addiction is a family disease and the effect that it has on the entire family is devastating,” said Wagner.

“I grieved the loss of my youngest daughter. She was still alive, but I grieved her because she was not with us. She was not with her children. Holidays, special occasions—she’s not there.”

Wagner said that since Christmas, she has had lunch three times with Mandy, who has just asked her when their next lunch date will be.

As for Holden, “he is an active, happy, healthy 12-year-old,” she said. “He pushes our buttons, he holds our hearts, and oftentimes he holds us as his very, very willing hostage.”