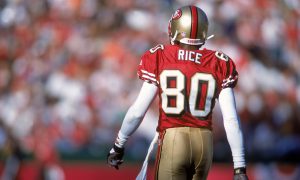 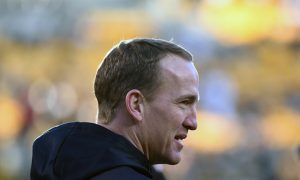 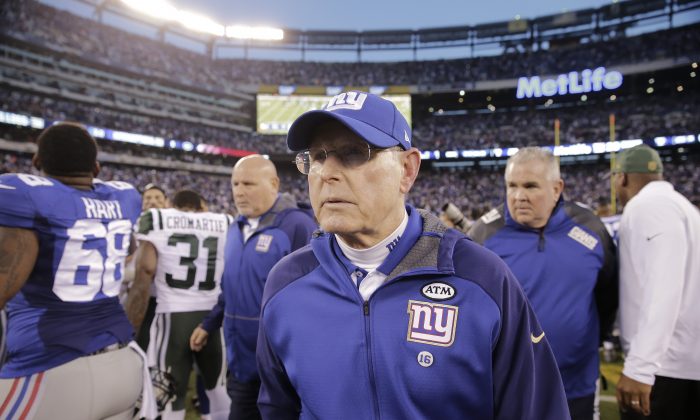 New York Giants Head Coach Tom Coughlin was second-guessed for going for it on fourth-and-goal—instead of kicking the field goal—in the loss to the Jets. (AP Photo/Peter Morgan)
NFL

An Early Look at the New York Giants Offseason Needs

Though the 6–8 Giants have not officially been eliminated from playoff contention, but you could say that the boot is on its way. After the Week 15 loss to the Panthers, the New York Times’ playoff simulator has the Giants’ chances of making the playoffs at 7 percent. Given the Giants track record this year, that’s a very pessimistic seven percent. In which case, here’s a preliminary look at he Giants’ tasks for the offseason.

We cannot speak of the new 2016 Giants without addressing the changing of the guard likely to take place.

It’s no secret that the 69-year-old Tom Coughlin is on the hot seat. Coughlin has had a memorable tenure with the Giants—one which started in 2004 and is adorned by two Super Bowl victories. However, the Giants of today are no longer a team with the raw materials to make the Super Bowl that needs a coach like Coughlin to build it. The Giants are now set to miss the playoffs for four straight years. This year in particular has been marred not only been conspicuous breaches on defense, but an inability to finish games—the Giants have 6 loses after being ahead or tied in the final minute of regulation. This marked inability to get wins has left Giants fans crying for a change of culture. As of now, who Coughlin’s successor will be if he does indeed leave is still uncertain. But one thing’s for sure: a new regime is sure to bring with it new culture, philosophy, and schemes, which will have a direct impact on the type of players the Giants target in the offseason. But as of now, we can still analyze the Giants’ needs at various positions.

After witnessing the quarterback fiasco the Cowboys had after losing Tony Romo, some fans are wondering whether to start grooming a successor for the 34-year-old Manning, especially in a relatively deep, but not top-heavy quarterback draft class. Here’s what I think: if the Giants were a Super Bowl team, then sure. But the Giants have so many gaping holes at other positions that taking a quarterback in the first round would just be ludicrous. If the Giants want to address the quarterback position via the draft, if should only come in the middle-late rounds.

The Giants employed an uninspiring three man committee of Rashad Jennings, Shane Vereen, and Rashad Jennings this season, leaving some fans wondering whether it’d be a good idea to take a true impact runner like Ohio States’ Ezekiel Elliot in the first round. Though the Giants have more pressing needs elsewhere, this isn’t too different a situation from when the Rams drafted Todd Gurley last year. Grabbing a running back does have its merits, such as injecting life into a offense lacking playmakers besides Odell Beckham, giving Eli a mean play-action to work with, converting short-yardage downs, and so forth. But again, one has to be careful not to be allured by the ‘hype’ pick.  While the Giants offense fared well this season, the Giants defense was around dead last in a multitude of categories. What’s more the Giants, have spent their last four first round picks on offensive players, making it appear even more negligent if the Giants were to ignore defense in a year where it’s needed the most.

With Victor Cruz and Rueben Randle set to become free agents, the Giants need a number two receiver under Odell Beckham. The Giants also have a gaping hole at tight end. They don’t necessary need a star. An unflashy, yet reliable tight end who can catch passes when he’s asked to, and is a good blocker (think Kevin Boss) sounds quite appealing right about now.

Giants 2015 first round pick Erick Flowers has had his struggles this season, but how can you give up on a first-round pick after one season? One spot to the right of him, 2013 first round pick Justin Pugh has had a great season, and the Giants should make a priority of extending him. One more spot to the right, center Weston Richburg—a 2014 second round pick, is actually Pro Football Focus’s number one ranked center at this point. So from this angle, it seems any concern for the Giants’ O-line is unfounded. The one issue the Giants do have on the line is the right tackle position. Will Beatty—the Giants left tackle before Flowers took over, has missed the entire season due to injury, and was a decent player before he got injured. Ideally, he could slide in at right tackle, meeting the need. However, it is uncertain just how effective the 31-year-old Beatty will be after being plagued all season with injuries. What’s more, there is the the contract issue: Beatty is set to earn $9 million next season; if he can’t play up to that level, it may be beneficial to move on and look for other options. Finally ,at right guard, Geoff Schwartz was playing well before breaking his leg, so you could say that that need is met. But this precisely shows the importance of depth in the NFL; injuries are highly prevalent, and thus at the end of the day it wouldn’t be ludicrous if the Giants spent an early round pick on an offensive lineman.

Its no secret that to contend, the Giants have got to turn around their defense. Some statistics on what needs to be fixed:

The first issue that needs to be addressed is the defensive line. In evaluating the Giants’ line, there are a few caveats.

The Giants played without Jason Pierre-Paul for the majority of the season; when he returned, he had a notable impact on the productivity of the line (despite having only one hand). Secondly, Robert Ayers has had a second straight productive year with the Giants, proving that last year was no fluke. After flaming out as a first round pick in Denver, Ayers has been revitalized in New York, becoming a reliable pressure generator. In the middle, the Giants lost nose tackle Johnathon Hankins for the season in early November.  Having Hankins back on the field in 16′ will further bolster the line—especially in run defense, but also with some dividends in pass-rushing.

The problems are as follows. ‘JPP’ he is set to become a free agent this offseason. After seeing how abysmal the Giants pass-rush is without him, the Giants should certainly make a priority of resigning him. Then considering this, they are still in dire need of another edge rusher, even if Pierre-Paul is resigned. This can perhaps be addressed early in the draft. The significance of a defensive line that can generate pressure is huge for the Giants defense. Not being to pressure the quarterback increases the amount of time receivers have to get open, magnifying the Giants’ issues in coverage. Thus in order to give up less passing yardage, an improved pass-rush is crucial.

If we assume guys who need to be resigned are resigned, players stay healthy, and some new talent is injected into the line, it is my conjecture that the Giants should at least do considerably better than the 2nd worst sack total in the league.

The Giants are in the running for the worst linebacking corps in the league. The team desperately need a playmaker at the linebacker position that can sniff out plays and make tackles, and more importantly, cover the middle of the field. Due to the lack of talent at the position, the Giants have been burned a ton in the middle of the field and this lapse in coverage is a big reason why they cede the most passing yards in the league. Note: inside linebacker Jon Beason—currently on injured reserve, is likely gone after this season. This is also a position the Giants can consider addressing in the first round, perhaps with the likes of Myles Jack or Jaylon Smith depending on draft position.

Dominique Rodgers-Cromartie is a top-tier corner, and Prince Amukamara is solid if he is re-signed. But in today’s NFL, third and fourth corners get a lot of playing time, so getting another corner—particularly a slot corner, is crucial for the Giants. As with the linebacker position, the Giants also have a dearth of talent at safety. With 2015 second-round pick Landon Collins staying put at strong safety, the Giants desperately need a free safety opposite him, and just more talent at the position in general.