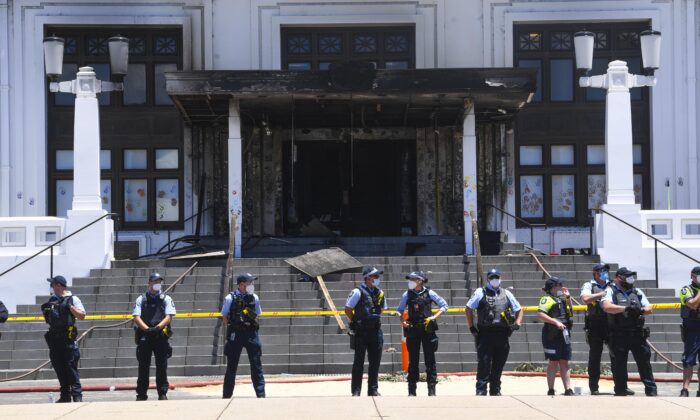 An Attack on Democracy: The Burning of Australia’s Old Parliament House

It has been widely reported that on Dec. 30, 2021, a group of protestors, carrying Aboriginal flags, gathered outside the Old Parliament House in Canberra, the capital city of Australia, and set the front entrance to the heritage listed building ablaze.

It was the second such incident; the first one occurred on Dec. 21, 2021. There is extensive damage, but the doors, originally installed in 1927, might be salvageable and could be repaired.

This attack on a national monument necessitates a consideration of the circumstances and background, which provoked or led to this ruinous event.

Of course, the firebombing of the door to the Old Parliament House is a criminal act, even if protestors accidentally, negligently, or intentionally started the fire with the performance of a smoking ceremony. But it raises the question as to whether the fire blaze is a desperate attempt, on the part of the protestors, to publicise their frustrations and bring their plight into the public domain.

Specifically, the protestors lament the “invasion” of Australia by Captain James Cook in 1770 and the resultant loss of sovereignty. For them, the Old Parliament House serves as a convenient and hated monument to vent their frustrations.

In this context, it is relevant to mention that, on Australia Day in 1972, Aboriginal protestors established an “Aboriginal Tent Embassy” on the lawns in front of the Old Parliament House. This “Tent Embassy” has since become a quasi-permanent structure and, hence, the 50th anniversary of its establishment will be celebrated on Jan. 26—Australia Day.

The protestors and their sympathisers might argue that the setting on fire of the Old Parliament House is an example of legitimate civil disobedience, even if it is regarded by law enforcement and commentating politicians, as a criminal act.

A perfunctory review of the copious literature on civil disobedience reveals that specific instances of societal injustice can only be remedied through violent means. Of course, this view assumes that non-violent means of expressing dissatisfaction with society’s history are not readily available. According to this argument, the very existence of Australia is an abomination, and its economic system may be regarded as an alien scourge that obliterated the traditional Aboriginal lifestyle.

It can be expected that as we get closer to Jan. 26, there will again be an avalanche of newspaper and magazine articles to support the view that the landing of Captain Cook in Botany Bay was an “invasion.”

The argument that the setting of the fire was an example of legitimate civil disobedience could be supported by the decision in Musser v Utah where the Supreme Court of the United States expressed the view that the “position, that the state may prevent any conduct which induces people to violate the law, or any advocacy of unlawful activity, cannot be squared with the First Amendment.”

The First Amendment is the free speech provision of the American Constitution. Yet, in another well-known case, the Supreme Court signalled that freedom of speech is limited. Justice Oliver Wendell Holmes famously stated in Schenck v United States that, “The most stringent protection of free speech would not protect a man in falsely shouting fire in a theatre and causing a panic.”

However, the view that the protestors’ behaviour should not be tolerated is sound and cogent, for at least two reasons.

First, the firebombing, being a criminal act, is a violation of a heritage listed Australian monument, inextricably intertwined with the history of Australia, which houses the Museum of Australian Democracy. In firebombing the building, the protestors are also effectively attacking, or at least denigrating, the concept of representative democracy.

In Australian Capital Television Pty Ltd v Commonwealth, the High Court of Australia confirmed this nation is a representative democracy which the Constitution creates.

Second, the Aboriginal Tent Embassy, although not directly involved in the firebombing, facilitated, or inspired the attack by its location on the front lawns of the Old Parliament House. Even if citizens are allowed to establish a structure on public property, surely there is always a requirement that the forum be suitable for that purpose and is not chosen for the purpose of denigrating Australia’s democracy.

The fact that authorities allowed the Tent Embassy for half a century evidences the existence of a form of affirmative action based on the ground of race, which makes a mockery of Australia’s determination, expressed in the adoption of the Racial Discrimination Act 1975 (Cth), to make “race” an irrelevant characteristic in the distribution of burdens and benefits in society.

Of course, the use of “fire” could potentially rejuvenate a nation. This is because fire may symbolically express the aspirational hopes of those who seek purification and solace. For example, the fireworks that took place on New Year’s Eve are expressions of hope for a new beginning and a better future.

But “fire” could also be a destructive force, as is evidenced by the disastrous bush fires that ravaged Australia during the summer of 2019-20. The Black Summer fires dominated the news, pre-COVID-19, and activated the indomitable spirit of collaboration and neighbourliness among Australians.

The use of “fire” could also be an expression of desperation and used as a weapon of destruction. A textbook example of this is the bonfires started by German students on May 10, 1933, when they burned literary “un-German” masterpieces. The firebombing of the Old Parliament House serves as another example of this use of fire.

It was rightly condemned as a crime, denounced by the Minister of State Ben Morton, who is responsible for heritage listed buildings. In a statement, Morton stated that “criminal damage has no place in our democracy.”

This brings us back to Musser v Utah, where Justice Rutledge indicated that, “It is axiomatic that a democratic state may not deny its citizens the right to criticize existing laws and to urge that they be changed” and that “we might permit advocacy of lawbreaking, but only so long as the advocacy falls short of incitement.”

The setting of fire to the Old Parliament House is shameful and discloses a penchant, among the protestors, to destroy the democratic history of Australia.