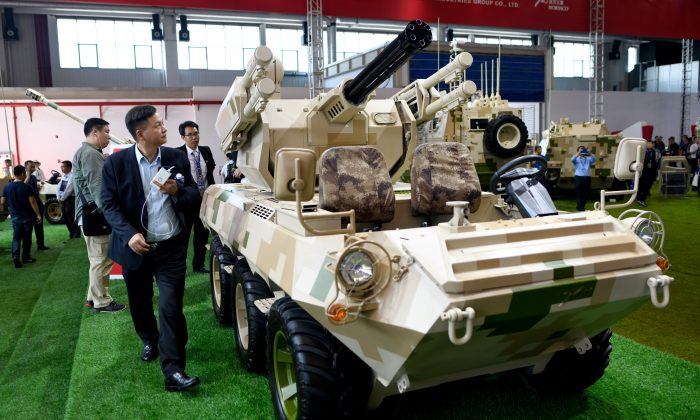 This article is the second in a series of four reports on Airshow China, a biannual exhibition held in the city of Zhuhai, China.

The former Second Artillery, now Rocket Forces of the PLA, traditionally has been the PLA’s main missile-armed service, controlling short, medium, intermediate, and intercontinental-range ballistic missiles and some cruise missiles.

The PLA Ground Forces have in recent years acquired artillery rockets comparable in range to short-range ballistic missiles (SRBMs) and may be acquiring tactical-range cruise missiles.

The PLA Air Force and PLA Navy have been equipped with long-range cruise missiles, but more recently both have acquired air- and ship-launched ballistic missiles. SRBMs reach speeds of Mach 3 to Mach 6, making them far more difficult to shoot down compared to subsonic-speed cruise missiles.

CASIC’s new CM-401 solid-fuel, anti-ship ballistic missile (ASBM) is likely the world’s first ship-launched ASBM to be offered for sale. It’s likely based on CASIC’s 295-kilometer (183-mile) range, second-generation BP-12B SRBM introduced in 2016, which uses an infrared or radar guidance system. A cutaway model of the CM-401 shows that it has a radar for terminal guidance. It has an advertised range of 290 kilometers (180 miles), a top speed of Mach 6, and a “mean” or average speed of Mach 4.

Illustrations at Zhuhai show that it’s also capable of interception-avoidance maneuvering. However, the CM-401 is too wide to fit into existing ship vertical launch systems (VLS) sized for surface-to-air missiles, so it requires an inclined box launcher, which would take up deck space on a launch ship.

At Zhuhai, the CM-401 was displayed on a transporter-erector launcher (TEL), perhaps indicating it could equip PLA Navy Coastal Defense units. Based on conversations with CASC officials at an April 2018 Malaysian arms exhibition, it’s also possible that CASC could be modifying its HHQ-16 SAM as an ASBM, which can fit into existing VLS tubes. In addition, university lecture slides leaked in August 2017 from a retired PLA Navy rear admiral indicate the PLA may put longer-range, higher-speed ASBMs on ships, and even equip them with maneuverable hypersonic glide vehicle warheads.

Also seen at Zhuhai for the first time were new variants of CASC’s second-generation solid-fuel 280-kilometer (174-mile) range M20 SRBM. The M20A is equipped with an optical seeker to perform precision strikes. In addition, there is an M20B that wasn’t described but likely carries either a radar or electronic signal-homing guidance system.

Considering that PLA Rocket Force SRBM units all employ reload missiles, if the PLA replaced all first-generation SRBMs with second-generation models, the PLA could increase its 1,200 SRBMs targeting Taiwan to more than 4,000. While the PLA has yet to start such a general modernization of its SRBMs, when they do, both CASC and CASIC second-generation SRBMs may be able to attack both naval and ground targets.

One new missile at Zhuhai that raises some questions is the WS-600L solid-fuel short-range ballistic missile, which may ultimately be a product of CASC. At first, observers such as Henri Kenhmann thought this may be “HQ-8,” said to be a long-under-development 200-kilometer (124-mile) range surface-to-air missile system (SAM). This might have been understandable at first glance, as the WS-600L was placed next to a new phased-array SAM radar, and it apparently uses “cold-launch” missile tubes similar to those of advanced SAMs.

CASIC makes the 150-kilometer (93-mile) range HQ-9 SAM, but the launch tubes of the WS-600L are larger than those of the HQ-9. The WS-600L uses a Tai’an made TEL that’s usually associated with CASC missiles.

However, while it is clearly capable of longer ranges, it is being presented as a less-than-300-kilometer (186-mile) range SSM, which is part of the Wei Shi (WS) family of large diameter artillery rockets and guided rockets, usually associated with CASC.

Though it hasn’t yet been reported that the WS-600L has entered PLA service, its size may indicate that it can be developed into a medium-range ballistic missile (MRBM), with different warheads for a precision ground strike, or anti-naval strikes. Perhaps Kenhmann is half right: The WS-600L could be the SSM variant of the not-quite-ready-for-market HQ-8.

CASIC already makes for the PLA Rocket Force its 800- to 1,000-kilometer (497- t0 621-mile) range DF-16 MRBM family, so the WS-600L may be CASC’s attempt to exploit a larger rocket engine to make a less expensive MRBM.  The WS-600L would have an advantage of having four missiles per TEL, compared to the DF-16’s single missile.

While CASIC revealed its 40-kilometer (25-mile) range CM-501 and its 25-kilometer (15-mile) range CM-502 loitering reconnaissance-strike missiles at the 2016 Zhuhai show, it used the 2018 Zhuhai show to reveal its 70-kilometer (43 mile) range, 30 minutes endurance CM-501X, which is similar in range and has a similar boxy fuselage as the WS-43. The CM-501X and the WS-43 perform initial battlefield reconnaissance to cue the smaller loitering strike missiles.

CASIC’s missiles are launched vertically from a 4×4 wheeled vehicle, indicating it may be movable by helicopter. These systems demonstrate the PLA’s ability to more powerfully combine information and strike technologies.

With the revelation of the CASIC CM-401, China has become the first country to develop and offer for sale a short-range anti-ship ballistic missile (ASBM), even though it has DF-21D medium-range and DF-26 intermediate-range ASBMs in Rocket Force service today. While the CM-401 can only be launched horizontally from a ship today, it’s possible that China could develop a larger vertical launch system for this missile, or develop smaller ASBMs that can fit into existing VLS on PLA Navy ships.

All of this makes China the world leader in ground- and sea-based ASBM systems.

There is no open-source indication that a version of the CM-401 is in PLA Navy service today, but Chinese sources do indicate it is the PLA’s intention to introduce longer range ASBMs onto PLA Navy ships. When deployed, they will further stress U.S. Navy and allied navy ship defenses, which must already contend with shore-launched ASBMs, and air, ground, and sea-launched long-range anti-ship cruise missiles.

This year’s Zhuhai show also added to the “overkill” of choices already available from China’s competing missile companies. China is beginning to see some success in SRBM sales, with its B611 having been co-developed with Turkey; the CASC M20 having been sold to Belarus; and the CASIC BP-12 revealed in late 2017 to have been sold to Qatar.

For several years, a version of Iran’s Fateh-110 solid-fuel SRBM has had an optical precision guidance system. Might it have been supplied by CASC? Even though China was never a party to the 1987 Intermediate-Range Nuclear Forces (INF) Treaty, it’s well-placed to respond to the United States’s withdrawal from INF by matching any new long-range missile systems the United States develops and deploys in Asia.