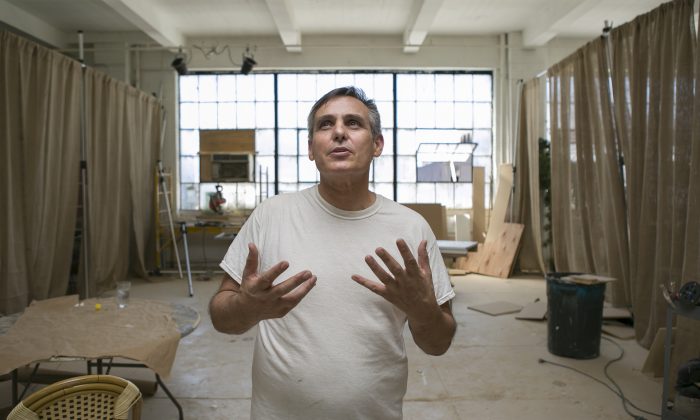 Shop Studios: An Art Studio in Manhattan That Really Does It All

NEW YORK—Fashion Week means being out the door by 7 a.m., completing a show before 10 a.m., and going back for more productions at Shop Studios (Shop) in Manhattan.

“It’s one of our busiest weeks of the year,” said Jacques Rosas, artist and CEO of Shop Studios. Still, it is one of the least elaborate things Shop does.

Fashion Week in New York represents the kickoff to a non-stop season of activity, as it leads in to the holiday season. First, there are the photo shoots, then there are the store windows, then holiday events, and the holiday parties.

While artists continue to be pushed further and further out in the city, the artist-run do-it-all Shop Studios has managed to not just stay in Manhattan, but grow and expand continuously. Seven months ago, the 17-year-old studio moved, yet again, to a 20,000 square-foot-space on the booming Far West Side of Midtown Manhattan.

“It was when we got this space that things really started to evolve,” Rosas said.

The studio has been a staple for high-end-fashion window displays, and shooting space for interview talk shows with clients like Oprah Winfrey, Barbara Walters, and Comedy Central. Oprah’s interview with Pharrell Williams crying after seeing videos from fans of his song ‘Happy,’ was filmed at Shop Studios. (See the video below)

Now, as brands become more social, companies like Tesla and Microsoft are seeking out Shop Studios to create immersive events.

It was more accurate to ask what Shop doesn’t do.

Shop Studios began as an art studio 17 years ago in Manhattan. Rosas and his partner Eric Steding, a designer, had pooled their skills and teamed up to start a company.

They began with window dressings, for storefronts like Hermes and Yves Saint Laurent, and it was Rosas’s first foray into fashion. He thought, why not, and found that styling came naturally to him. By the turn of the century, Rosas and Steding had dressed windows for two or three shops on every block up and down Madison and Fifth Avenues.

“We had dressed the entire city,” Rosas said.

Around the same time, Shop Studios added production to their art studio, with prop rentals and a Manhattan studio big enough to shoot in.

First, Disney started shooting a show at Shop. Then, the other networks followed.

What they found they could do there, and nowhere else, was use artwork in the sets.

“For the past 60 years, all of those networks have never been able to put a painting in one of their sets, ever, because it’s enormously complicated and there are rights issues,” Rosas said. In order to show art on screen, the rights have to be cleared—a lengthy process that can include up to two lawyers and an agent, after which the artist can still refuse. “In news, there’s no time, and certainly not the budget.”

But as Rosas and Steding put together the sets for these shows—news magazine shows like 60 Minutes and 20/20—they used their own artwork to enhance the sets. It allowed them to quickly change the set of different interviews done back-to-back, saving the crew the hours it would have taken to set up cameras all over again.

Not long after that, the directors and on-air personalities started noticing and collecting the artwork.

“I was getting exposure I couldn’t even dream of,” Rosas said.

Then the recession hit.

“People just stopped spending money,” Rosas said. From 2007–2008, Rosas and Steding had to lay off all of their staff and rely on prop rentals to make ends meet.

As a result, Rosas focused on his paintings, and pushed himself to sell them. “That was really when I started doing my own exhibitions,” he said.

It eventually paid off. Now he sells 50–60 paintings in a year and lives with the mentality that “it’s do or die.”

Seven months ago, Shop’s lease on 49th Street ran out and the building was sold. On the first floor of the new space on 39th Street is an art exhibition of Rosas’s own work.

“Fundamentally, we are an art studio,” Rosas said.

However, there is a whole floor and more of shooting space equipped with separate rooms with their own entrances, and roof space where an alien fight scene was recently shot for a feature film. Downstairs, props and fabrications-in-progress fill what the art exhibition doesn’t.

In the coming weeks, they have plans to do a series of concerts, starting with an orchestra and artist gathering.

“As an artist, I’ve never really felt like I belonged,” Rosas said. “I want to create a sort of, bohemian, creative space for as many West Side artists as possible.”

Art comes first for Rosa, even as the busy season starts. It’s not unusual for there to be a shoot upstairs and some building downstairs, all while planning for an event that will take place the same week.

More recently, companies and causes have all been asking for strange and unusual, oversized props. With the widespread use and effectiveness of social media, everyone is looking for something that will go viral.

“[They want] something so unusual that people want to stand by it and take a picture with it,” Rosas said. “This is a very exciting time to be in Manhattan and be in the media business.”

About 25 years ago, Rosas was attacked for his sexuality and hit over the head with a baseball bat.

“My visceral reaction was to cover the street with paint, where I was attacked,” Rosas said. It completely changed his outlook, he said, and he was filled with resolve to really pursue art.

Soon he ended up as a campaign director in Washington, D.C., and then started traveling between D.C. and New York City.

“As soon as I got to New York, that’s when things really started to happen for me,” Rosas said. “I take all the bad things that have happened to me, I call it my suitcase full of gold, and I just run with it.”

As an artist, Rosas seeks to inspire in every project Shop takes on. “The great thing about this being a stage and a studio within an art studio is that it’s more inspiring than anywhere else,” Rosas said. “We always hope that this translates into inspiration … like diving into a pool of possibilities.”

The do-it-all nature of Shop has inspired more people than Rosas realized initially. The company, which currently has a staff of 12, continues to grow.