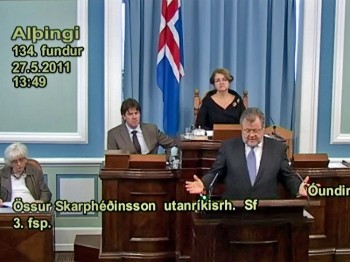 SORRY: Iceland's Foreign Minister Ossur Skarpheoinsson apologizes to Falun Gong during a session of the Althingi, Iceland's Parliament, on May 27. The country's prime minister, Johanna Siguroardottir, sits to the left. (Althingi of Iceland)
International

An Apology Nine Years in the Making

Matthew Robertson
Matthew Robertson is the former China news editor for The Epoch Times. He was previously a reporter for the newspaper in Washington, D.C. In 2013 he was awarded the Society of Professional Journalists’ Sigma Delta Chi award for coverage of the Chinese regime's forced organ harvesting of prisoners of conscience.
View profile
Follow
biggersmaller
Print
Governments don’t often apologize. Iceland made an exception recently though, when Foreign Minister Össur Skarphéðinsson said he was sorry for the way that Falun Gong practitioners were treated when they tried to visit the country in 2002.

At that time authorities issued a ban against practitioners of the spiritual discipline from entering the country, to coincide with the state visit of then leader of the Chinese Communist Party (CCP) Jiang Zemin.

Icelandic authorities then distributed a blacklist obtained from Chinese regime intelligence services, and carried out harassment and interrogations against Falun Gong practitioners on the island in an attempt to prevent protests.

“I can on behalf of the Icelandic government, here, from this chair, ask those that came at this time and suffered violations in this way to accept an apology,” Skarphéðinsson told the Althingi, Iceland’s Parliament on May 27.

He added that he thought it was wrong from the beginning, adding: “I can only say to finish it once and for all, that I am ready on behalf of the Icelandic government to apologize to those that were affected at that time.”

He was responding to a detailed question that he had been alerted to beforehand, asked during “impromptu question time,” when regular MPs are allowed to quiz Cabinet ministers.

“I am glad the minister has finally apologized,” wrote Herman Salton, an academic who wrote a book on the events of 2002, in an e-mail interview with The Epoch Times. “I am just surprised it took so long.”

He added: “This apology finally brings the Icelandic authorities into line with the will of the people of Iceland, who from the very beginning opposed this discriminatory, ill-conceived and utterly counterproductive ban.”

Ragnar Aðalsteinsson, a well-known human rights lawyer on the island who took an interest in the case from the beginning, was pleased with the result. “Well, you know, it’s a very late apology,” he first said, adding that he was “frankly quite happy” about it. “It’s late, but better late than never,” he said in the telephone interview.

The ban and blacklist in 2002 was widely recognized as anathema to Iceland’s political tradition and character. The country prides itself on its civic institutions, robust liberal democratic values, and openness (the mayor of Reykjavík, Jón Gnarr, is a former comedian, for example, and the story goes that Icelanders know one another by their first names).

Continued on the next page … locals’ resistance