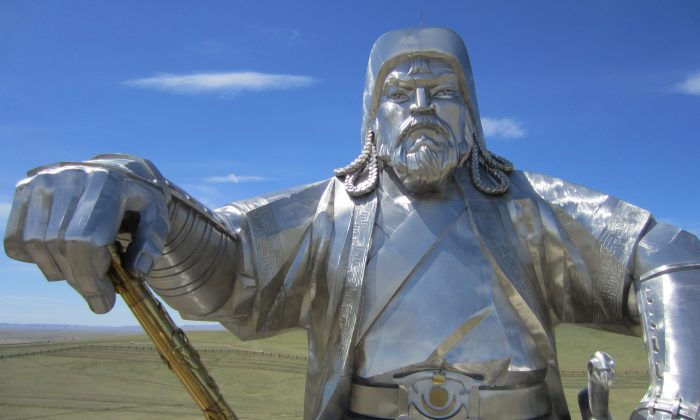 Recently, a magnificent find by archeologists yielded a structure lost to time, a military stronghold used by Genghis Khan and his army as they conquered the known world. Yet, despite enthusiasm from researchers both in America and abroad, the final resting place of the great conqueror continues to be a mystery.

Legend has it, that all 2,000 witnesses returning from Genghis Khan’s funeral were killed in order to keep the resting place of the warlord a secret, according to National Geographic. Whether this story is true or not, we may never know.

But the fact remains that after decades of searching with millions of dollars invested and even with today’s modern satellite imaging technology, his final resting place remains a secret.

Temujin, better known as Genghis Khan, means “of iron,” and the man lived up to his name throughout his life as the Mongol conquered nearly all of the Eastern world during the late 12th and early 13th centuries.

The Mongol horde left a bloody trail throughout the areas known today as Russia, Mongolia, and China.

Born in 1162, Temujin would ultimately build an empire that would stretch from the Pacific Ocean to what is today Hungary in Eastern Europe. This empire would be the largest the world would ever see and, like Alexander the Great who paved the way for the Western World, Temujin would reshape the Eastern one into the cultural wonder it is today, according to the Metropolitan Museum of Art.

Unlike Alexander the Great, however, when Genghis Khan fell from his horse at the age of 65 and (probably as a result of the fall) perished in 1227, his empire would not end quickly. In fact, his empire was at its largest two generations later under the reign of his grandson, Kublai Khan (1260–1295).

The Mongols quickly adapted from nomadic tribes to administrators of an empire. The Mongol Empire was officially renamed the Yuan Dynasty in 1271, after the whole of China was conquered. Under Kublai it was the first dynasty to establish Beijing as its capital and instituted a Chinese style administration, according to Britannica.

Amid the positive effects of uniting a continent and establishing of new trade routes and culture, the Mongol horde left a bloody trail throughout the areas known today as Russia, Mongolia, and China. At their height, they would even threaten Germans in Eastern Europe at the same time attempting to conquer Japan on the other side of their empire.

This bloody trail as well as their advances in unification and administration would forever change the Asian region as a whole.

Since the death of Genghis Khan, Mongolia has seen little archeological unearthing compared to the Middle East. In fact, Mongolia remains vastly uncovered, speaking in terms of archeology.

Today, Mongolia exhibits a very rich and thriving culture, and it is sometimes difficult to get permission to dig there as preservation and tradition are strongly rooted in the region. Among these traditions are the Mongolian beliefs that to exhume a buried corpse would mean the destruction of its soul, according to National Geographic.

Japanese researchers spent millions looking for the lost tomb.
“It is an exciting discovery because it’s located near where some other important events occurred in Khan’s life,” said John Woods, University of Chicago professor of Iranian and central Asian history, according to National Geographic.

These locations include Genghis Khan’s likely birthplace and the Great Kuriltai, where 20,000 people crowned him Khan of Khans, and ruler of “all who live in felt tents.”

To this day, Temujin’s tomb has never been confirmed among these 60, which lie roughly 200 miles northeast of Ulan Bator. A few dozen miles away lays another tomb, which Woods believes contains 100 of Genghis Khan’s soldiers who lost their lives keeping the final resting place of the great leader a secret.

Unfortunately, it is unclear whether Woods ever received permission from the office of the prime minister to further excavate the site and make a final determination one way or the other.

Woods was assisted in the early 2000s by Chicago area attorney, historian, and Genghis Khan enthusiast Maury Kravitz, who helped raise $1.2 million to fund expeditions over the course of four summers.

In 2007, a joint Japanese–Mongolian research team discovered the palace of Genghis Khan. Sitting upon a grassy steppe, the remains of the palace rests 150 miles east of Ulan Bator. Head of the project was Shinpei Kato, professor emeritus at Tokyo’s Kokugakuin University.

In early March this year, a Japanese–Mongolian research team discovered a fortress that belonged to the Mongol leader about about 550 miles west of Ulan Bator. The site was originally a castle and was turned into a military stronghold under the reign of Khan, who commissioned its conversion in 1212.

“We hope the discovery will be useful in ascertaining the history of the Mongolian Plateau between the 13th and 14th centuries,” said Koichi Matsuda, professor emeritus of Mongol Empire history at Osaka International University, according to International Business Times.

The hunt for Temujin’s lost tomb continues, despite the setbacks and fruitless searches. In the meantime, other significant finds continually emerge.