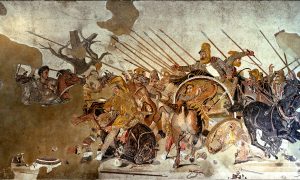 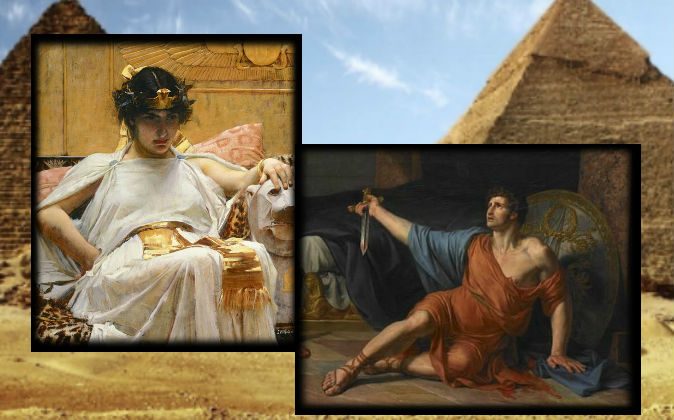 An Ancient Mystery: Searching for the Lost Tomb of Antony and Cleopatra

Mark Antony and Cleopatra are among the most famous pairs of lovers from the ancient world.  Following their defeat at the Battle of Actium in 31 B.C., they took their final refuge from the victorious Octavian in Egypt, where Cleopatra was queen. In 30 B.C., Egypt was invaded, and following the Battle of Alexandria, the two lovers lost their lives, under circumstances that most historians believe was suicide (though some maintain it was murder).

Nevertheless, it seems even death could not separate them, as historic sources record that they were laid to rest together. The location of their tomb, however, has never been found. It is a historical mystery that has endured over nearly two millennia.

The Death of Mark Antony

In “The Lives of the Caesars: Augustus,” Roman historian Suetonius (70–130 A.D.) records that Octavian forced Antony to commit suicide when he “tried to make terms at the eleventh hour.” Greek historian Plutarch (45–120 A.D.) gives an alternative version of Antony’s death in “The Parallel Lives: Antony.” Plutarch states that Antony committed suicide upon hearing false news that Cleopatra was dead. Upon Antony’s death, Octavian was eager to capture Cleopatra alive, as “he thought it would add greatly to the glory of his triumph if she were led in the procession.”

The Death of Cleopatra

According to Plutarch, Cleopatra preferred to die in Egypt than be taken alive to Rome, as she could not bear the thought of being separated from Antony. Plutarch relates part of the speech she made prior to her suicide: “For though in life nothing could part us from each other, in death we are likely to change places; thou, the Roman, lying buried here, while I, the hapless woman, lie in Italy, and get only so much of thy country as my portion.”

The Roman historian Cassius Dio (155–235 A.D.) narrates that Cleopatra regarded being paraded as a captive in the streets on Rome as a “fate worse than a thousand deaths,” and this was the reason that she sought to die by her own hand.

However, not everyone agrees that Cleopatra committed suicide. Another popular theory is that Cleopatra was murdered by Octavian so that he could take control over the Empire.

Still, Octavian allegedly allowed Antony and Cleopatra to be buried together. According to Cassius Dio, “They were both embalmed in the same fashion and buried in the same tomb.”

In Suetonius’ account, “He allowed them both the honour of burial, and in the same tomb, giving orders that the mausoleum which they had begun should be finished.” Plutarch adds that Octavian admired Cleopatra’s “lofty spirit,” thus allowing her to be buried with Antony “in splendid and regal fashion.”

It is possible that the tomb was not constructed as a grand monument, considering that it could be used as a rallying point against Octavian in the future. Hence, the tomb may have been regarded as insignificant, and neither the location nor a description of it was recorded for posterity.

Despite this interest, not much progress has been made in the search for this elusive tomb. Some have speculated that Cleopatra was interred in her palace, where she committed suicide. This palace is now under the sea, and the remains of the two lovers would not have survived if this was the case.

In 2009, Egyptian archaeologist and former Minister for Antiquities Affairs Zahi Hawass  announced that the tomb of Antony and Cleopatra might have been found. The supposed site is a temple to Osiris known as Taposiris Magna (built during the reign of Ptolemy II), and is located to the west of Alexandria.

The speculation that this might be the burial place of Antony and Cleopatra is based on the discovery of a damaged bust of Cleopatra, 22 coins bearing her image, and a mask supposedly belonging to Antony. Additionally, 27 tombs and 10 mummies were also discovered. Despite the sensation, doubts have been raised that this is the tomb of the famed couple. For instance, one archaeologist suggests that it is unlikely that Octavian allowed his vanquished enemies to be buried in such a prestigious temple.

It is likely that much more work will be needed before this ancient mystery can be satisfactorily solved.