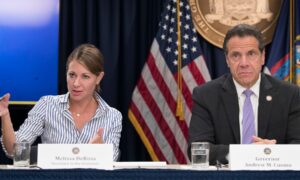 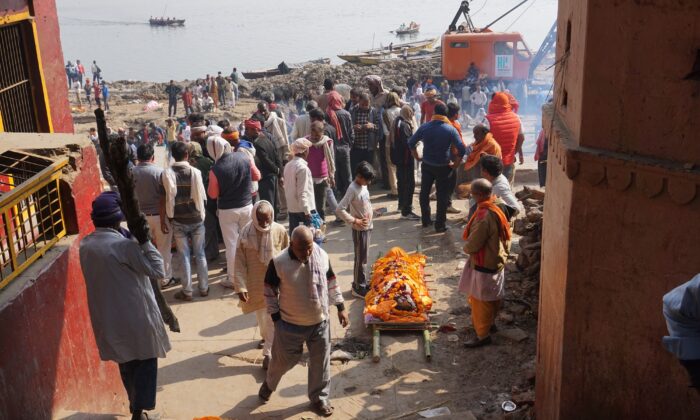 A corpse decked in marigold flowers waits for its turn on the pyre on the ground at the Manikarnika Ghat in Kashi on Feb. 12, 2021. (Venus Upadhayaya/Epoch Times)
India

An Ancient City for Cremation Deals With the Pandemic

VARANASI, India—Pyres burn 24 hours on the banks of the river Ganges in Kashi, a city where Indians have been coming to cremate the bodies of their loved ones for thousands of years because they believe it can liberate the soul of the departed.

As the pandemic struck India, Kashi (the name used by devout Hindus for Varanasi) saw fewer corpses reaching its shores, but the ones who came included those who died because of the virus. The arrival of those who had died from COVID-19 affected the cultural forms and the business of death. With lockdown restrictions easing, things in Kashi are returning to the ancient ways.

The holiest cremation ground of the Hindus, “Manikarnika ghat,” which is thousands of years old, stood busy on Feb. 12, with a dead body arriving every five minutes, carried on the family’s shoulders through the narrow lanes on the slope of the ghat, or bank, that led straight to the river.

Those carrying the dead repeated a Hindu chant that reinforces the belief in God and the afterlife.

While corpses wrapped in bright clothes and decked with flowers waited for their turn on the pyre, a group of young men stood guard at the sacred bonfire, which burns 24 hours a day and lends fire to every pyre.

Their job is to keep it burning, and they remain present there, despite the pandemic.

“This is a ‘dhuni’ [sacred fire] lit by Lord Shiv himself 3,500 years ago,” said Sundar Yadav, 21, a merchant who sells many varieties of wood for families to choose from for the cremation.

Yadav said that previously, about 300 to 400 dead bodies would come to Manikarnika from around India every day for cremation, but this changed during the pandemic.

“During the pandemic, this decreased to 50 to 100 every day, and were mostly from areas from 16 miles around,” Yadav said, adding that the overall business was also hit because the accompanying people were fewer in number.

It’s believed that the day the dead stop coming to Manikarnika, the world will meet a holocaust.

“That sounds logical because the day a holocaust happens, no one will come to Manikarnika,” Ravi Shankar Shukla, 43, a priest and classical musician from Kashi, told The Epoch Times at the Assi Ghat, another bank on the river Ganges where cremation rituals are done.

He said Manikarnika is known as “Mahashamshan,” which means the best of all crematoriums since prehistory—where fire and pyres don’t stop burning.

“Manikarnika cremation ground finds its mention in ‘Kashi Mahatmya’ [scripture] in the Shiv Puran,” said Shukla. Purana, which in Sanskrit means ancient, is sacred literature and has been in existence for at least 2,500 years.

“Kashi has seen many disasters and epidemics. Look at how crowded the city is even today,” said Shukla, who noted that many people had died of COVID-19 in the major Indian cities of Mumbai and Delhi.

“When people come to us to perform rituals, they only tell us the name and the date of the death. We don’t note the cause of the death in our records. It can be hurtful to divulge the cause of death.” It’s therefore impossible for him to know how many have been the result of COVID-19, he said.

Twelve generations of Shukla’s family have served as priests performing rituals on the banks of the Ganges in Kashi.

People still come looking for Shukla because his forefathers had served them as priests, and the family holds these people’s ancestral records. Some Brahmin families such as Shukla’s in Kashi own genealogy records of people from around India for centuries.

Death means rituals among Hindus, and on the banks of the Ganges, priests sit performing rituals that are done during or after the cremation and differ according to the type of death.

“The pind dan is done on the first day of the death. It represents the dead merging with the five elements. After 10 days, the ganth dan is done on the pipal tree [sacred fig or the bodhi tree],” Rakesh Tiwari, 52, a priest at the Assi Chat said, explaining the death rituals done for a soul’s liberation, which finish by the 13th day.

“When my neighbor died due to coronavirus, his body was taken straight from the hospital in a sealed coffin to the electric crematorium. The authorities put a lock on the door to quarantine the family for 14 days. Where then is an opportunity to do the rituals?

“They can only chant Ram nam satya hai,” a chant commonly uttered when carrying a dead body.

Half a mile from where Tiwari sat, Aarti Sharma, 56, sat outside her small grocery shop at the entrance lane to the Assi Ghat. Her husband, a bank employee, had died from COVID-19 on Sept. 4, and Sharma hadn’t yet come to terms with it.

People give a customary bath to a corpse at the ancient #Manikarnikaghat at the bank of #ganges in #kashi on Feb. 18, 2021. We bring you a story of world’s most ancient crematoriums.#EpochTimes pic.twitter.com/kDLns18Cti

After death, the bodies of the dead are traditionally carried on the shoulders of their sons and near relatives. But due to the pandemic, only Sharma’s two sons would carry the body, as no one else would come near. They found it difficult to carry the body of their 187-pound father on their shoulders by themselves.

Her son Vikas Sharma said: “I almost fainted in the PPE suit in the ambulance. I was in grief, and everything felt suffocating. I have lent a shoulder to so many dead from my relatives and neighbors but couldn’t believe what was happening to us.”

Two bold neighbors eventually lent a hand, and the four managed, with effort, to carry the body to the electric crematorium, which requires minimal expense. In normal times, it’s not preferred by most, as emotional families want to give their loved ones the best ritualistic send-off.

“God should never show such a time even to enemies. It felt like our own people were not our own,” Sharma said.

What Is to Be Done for the COVID-19 Dead?

Just a mile away from Tiwari and Shukla, smoke emerged from the electric crematorium at the Harish Chandra ghat, where generally those who suffered mutilation are cremated, and where CCP virus casualties also are cremated.

Mohit Mehrotra, the caretaker of the government-run crematorium, was dressed in a white blazer, in stark contrast to the traditionally dressed priests on the banks.

He sat in a large hall on a table with two attendants. Behind him, large windows open to the Ganges while on his right stood two electric crematorium chambers, the furnaces of which could be seen from the boats plying with pilgrims on the Ganges.

Outside the gate, a dead body lay on the ground, as according to tradition it should lie on the earth. Many relations stood mourning by the wall.

“During the time of the pandemic, the administration ordered us to take only the COVID bodies. From July last year, we were every day getting over seven to eight bodies. Now it’s almost none,” Mehrotra said, adding that more than 74 percent of the dead have come from the city and the rest from around the state, but no COVID-19 victim has been brought to Kashi from other parts of India.

The youngest that Mehrotra’s team cremated was 14 years old and the oldest was 70.

“The ashes of the COVID patients were also immersed into the Ganges,” Mehrotra said when asked what happened with the ashes of dead cremated at the electric crematorium.

“When the body is cremated, it becomes one with the five elements. The ashes are immersed in the Ganges and merge with the soil. This means the body came from the soil and went back to the soil.”

A priest or a Brahmin’s household runs by the donations given by those coming for rituals, Tiwari said. During the lockdown, the banks remained closed to the dead and the pilgrims for almost a year, leaving him with almost nothing.

“A Brahmin does Shrad [death rituals], with Shradha [devotion] and not with material interests in mind. Now people think ‘How much will I earn?’ That’s why pandemics like these are happening,” Tiwari said.

As Tiwari sat on a wooden bench under a bamboo umbrella, a woman sat to the side performing a daily ritual while another sat on the ground reading the epic “Ramayana.”

“They have taken a ‘sankalap’ [vow]. A sankalap is taken for which a ritual is done,” Tiwari said. He repeated a few Sanskrit words spoken in sankalap prayers, “Kali yugey Kali prathama charney,” meaning that in the first phase of the age of darkness, death and destruction will begin.

Families get ready for cremations on the bank of the river #ganges at Harish Chandra Ghat in #kashi on Feb. 18. (A pyre burns in the foreground and another is getting ready behind). #EpochTimes pic.twitter.com/Ydyj7t2TjY

“Isn’t it happening today? People are dying due to such novel and different causes.”

Shukla said that the dharmic (religious) traditions in India believe that death is the biggest truth of life, but no one likes it.

“It’s a fact. What people do to live and what people do to die—that you find in Kashi,” he said, adding that all traditions, including the Hindu calendar, were designed keeping in mind the concept of the continuity of life after death.

Since the lockdown was lifted, these rituals of life and death have started to come back to the river banks of Kashi.