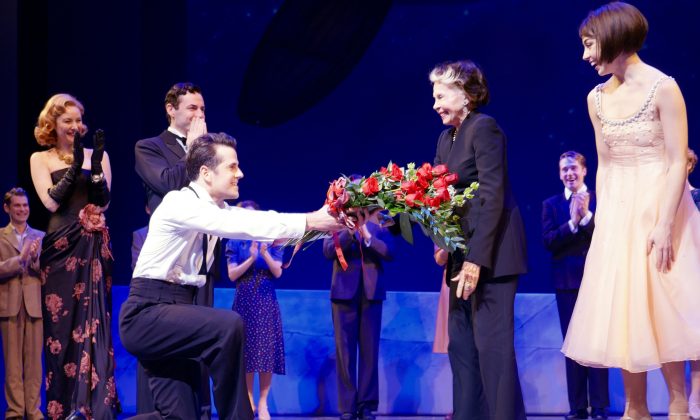 In this Jan. 12, 2016, image released by Boneau/Bryan-Brown, actress Leslie Caron, who starred in the film, "An American in Paris," second right, is presented with flowers by Robert Fairchild as the rest of the cast, background from left, Jill Paice, Max von Essen and Leanne Cope (R) after a performance in New York. (Apples and Oranges Studios/Boneau/Bryan-Brown via AP)
Entertainment

NEW YORK — Leslie Caron carries a souvenir of making the classic 1951 film “An American in Paris” with her every day.

The 84-year-old French beauty wears a ring she bought with her first paycheck from the Gene Kelly film. Back then, she was a shy teenage ballerina and the jewelry she picked made a statement: A phoenix with a globe in its talons.

“It means I can grapple the world,” the actress said late last week in the midst of a whirlwind trip to New York.

Two people who gazed reverentially at her ring in her hotel suite were two young dancers who know exactly how she must have felt — Robert Fairchild and Leanne Cope, currently starring in the lush Broadway musical “An American in Paris.”

Like Caron, Fairchild and Cope are ballet dancers who spread their wings into another medium thanks to the power of the story set in post-war Paris with Gershwin songs.

When it was released, the film “An American in Paris” became an instant hit, winning the best picture Oscar. Caron skyrocketed to fame, appearing in such hit musicals as “Lili,” ”Daddy Long Legs” and “Gigi” before moving on to success in both comedies and dramas.

Caron hadn’t ever intended on a career in film. “When I was told, ‘Gene Kelly wants to meet you,’ I wasn’t impressed. I didn’t even know who he was. ‘Gene, who? Who is that?'”

More than 60 years later, Fairchild and Cope, who each took a leave from their ballet companies, made their own brave leaps out of the bubble of ballet and received Tony nominations.

Caron couldn’t visit New York without seeing the musical adaptation of her most famous movie and she did on Tuesday, getting a standing ovation and flowers after being brought onstage.

“It was so cool to have you in the audience,” said Fairchild. “There’s a heightened obligation to bring it to you. What an incredible opportunity for us to have you there. It was amazing.”

Caron, who almost blushed at the attention, replied; “It was an inspiring evening. I was really thrilled the moment the curtain went up.”

During a 45-minute meeting, the three chatted about everything from onstage injuries — Cope suffered a concussion during one performance, Fairchild a calf injury — to how hard it is to capture dance on film. Caron recalled long hours dancing on concrete during the “An American in Paris” filming.

“We filmed a 30-second commercial two weeks ago and I found it the most difficult thing,” said Cope. “It was so hard and it was for 30 seconds. That’s all it was. I can’t imagine filming what you did.” (Caron replied: “I was very young.”)

Both Fairchild and Cope recently marked the show’s 300th performance but their time together is winding down. Fairchild will permanently return to New York City Ballet in March.

“You may come back to Broadway?” asked Caron.

As for Cope, bigger changes are in the works. The same day her show honored Caron, the English dancer resigned from the Royal Ballet, her home for the past 20 years and where her husband dances.

“I feel like this is my world now,” she said, tearing up. “I feel like it’s time to make a change and do something new.” She will stay with the show and then pursue Broadway career.

“I couldn’t say no,” she said. “And then, fingers-crossed, who knows? I mean, I never imagined this would happen, so who knows what’s going to happen next.”

Caron was encouraging: “You’ve been given an enormous gift,” she said to the young dancer. “She has the discipline and open enough mind to take it in, learn and keep on growing.”

It’s no surprise that Caron was encouraging: She has a soft spot for Broadway and adores its depth, including “Hamilton,” which she also saw (“It’s staggering and so amusing.”)

Did she ever want to make her own Broadway debut? “I do still — 80 years later,” she said, laughing. “I think Broadway is the top. It’s so rich, so full of mind-blowing shows.”