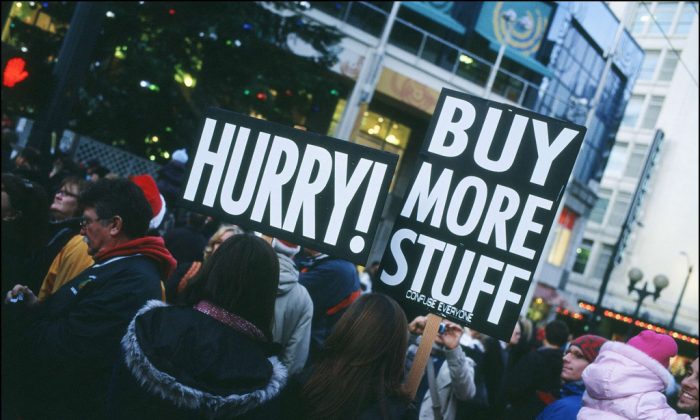 Black in the UK. Signs of change. (John Henderson, CC BY)
UK

An American Gift to the UK: The Black Friday Consumer Splurge

The US has been accused of inflicting their commercialised version of Halloween on us, and now we have the horror of the Black Friday “celebrations” in our calendar as well. In the US, this is the day after the Thanksgiving Thursday and marks the start of Christmas shopping in earnest. It is greedily anticipated by retailers keen to capitalise on it by offering longer opening hours and deeper discounts that encourage a form of reinforcing media frenzy at the same time.

While it is not officially a holiday in the US, many government employees and even schools have the day after Thanksgiving off, and with the weekend immediately following, it means even more time to get that Christmas shopping done. The origin of the name Black Friday is unclear. Some refer to its use by the Philadelphia police department to describe traffic conditions the day after Thanksgiving, but others say it marks the turning point in the year where retailers start to make a profit, and move from the red into the black.

Black Friday really took hold in the UK last year with Asda (owned by US retail giant Walmart) promoting huge discounts across its stores, selling 16,000 tablet computers in an hour and a month’s worth of TV sets in 45 minutes. Black Friday has taken off all over the world including Australia, Germany and Mexico where the government and retailers got together to create a weekend of consumer initiatives. In a world looking for consumers to play their part in driving a fragile recovery forward, the attraction is obvious.

Increasingly, the deals are web-based and people can sign up to have regular alerts to the latest discounts, which are often strictly time limited. Amazon has already started the shopping bonanza by halving the price of Kindle tablets, and will also be offering “lightning” deals every few minutes to ensure that customers stay online, while John Lewis is planning to have significantly extended opening hours.

So how do retailers benefit from Black Friday when the discounts seem so deep?

Well the first thing is building traffic. Following unseasonably warm weather this autumn, when customers just didn’t seem to have got into the winter shopping frame of mind, retailers now have to find a way to get everyone out there shopping, and above all they need to get to the pound in your pocket before the competition does.

Once we’re out there Christmas shopping, if we spot a bargain we often buy it and decide later who to give it to, so that means extra sales. Everyone’s customers are up for grabs, so while most of the year retailers are principally competing with stores similar to themselves, in the weeks coming up to Christmas a retailer like John Lewis will be diving into the scrum as much with Dixons and Asda, as with its usual adversaries like Marks and Spencer and Selfridges.

They all need to get as much of your Christmas cash as they can. The retailers know in advance that they will have to engage in this pre-Christmas bun fight if they are going to get a share of the market. Savvy customers may question why prices couldn’t be lower through out the year instead.

And of course, while out shopping for others we may be tempted into the occasional impulse purchase for ourselves. When we are in the spending frame of mind we can easily be enticed into buying more than we might have intended. Research has shown that in such situations a credit card can act as a stimulus to purchase more. So like it or not, Black Friday is here to stay, but just count to five before pressing the “Buy Now” button or marching fully laden to the tills.

Isabelle Szmigin does not work for, consult to, own shares in or receive funding from any company or organisation that would benefit from this article, and has no relevant affiliations. This article was originally published on The Conversation. Read the original article.