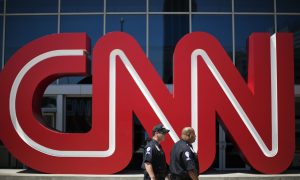 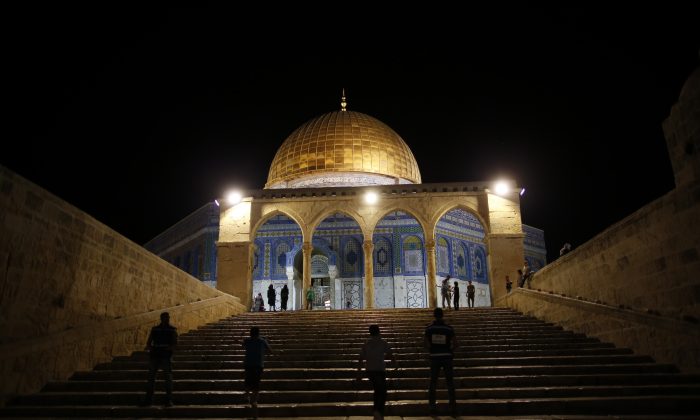 Palestinian walk past the Dome of the Rock in the al-Aqsa Mosque compound in Jerusalem during "tarawih" prayer marking the first evening of Islam's holy month of Ramadan, on June 6, 2016. (Ahmad Gharabli/AFP/Getty Images)
Opinion

An Alternative to Boycotts or Divestment for Israel

NEW HAVEN—French Foreign Minister Jean-Marc Ayrault is going to try his hand at reviving the Middle East peace process, inviting international leaders to a meeting in Paris on May 30.

Inevitably this will reignite discussion about the usefulness of sanctions against Israel that have become known as the BDS, or Boycott, Divestment and Sanctions Movement, designed to put economic pressure on Israeli firms, particularly those that do business in the West Bank and Gaza. Several European countries, especially Finland, Norway, and Sweden have pursued BDS.

There is little evidence that boycotting Israel will have a significant impact on Israel’s thriving economy, let alone help revive the stagnant peace process. The boycott has, however, added to the ranks of unemployed Palestinians, fueling the misery in the West Bank and Gaza.

The recent history of SodaStream reveals why. It’s one of hundreds of Israeli companies targeted by the BDS movement. SodaStream produces machines for homemade sparkling water. Over the past two years it has become a focus of boycotts for operating a manufacturing plant in the West Bank near Jerusalem.

In April, the firm jettisoned the plant for a new facility in Israel, eliminating 500 Palestinian jobs in the process. CEO Daniel Birnbaum denies being coerced into the decision, but the move underscores the costs of creating a climate that leads Israeli companies to disengage from the Palestinian economy.

SodaStream will likely profit from consolidation while many of the former employees of the Mishor Adumim production plant will join the bloated ranks of the unemployed. According to the World Bank, the unemployment rate is 19 percent for the West Bank and an astronomical 43 percent for Gaza.

Israel withdrew from Erez Industrial Zone in 2004. Since then, cross-border ventures like SodaStream have atrophied.

Since Israel withdrew from the Erez Industrial Zone in 2004, its last significant economic collaboration with Palestine, cross-border ventures like SodaStream have atrophied.

Erez, which had abutted the Gaza Strip since 1970, held 187 firms and employed nearly 5,000 Gazans when it collapsed. Those that persist have been criticized for exploiting Palestinian labor.

Yet, as the SodaStream case illustrates, BDS can be more harmful to Palestinian workers than to targeted companies or Israel’s economy.

As the world ponders a fresh means of relaunching the peace process, advocates of change might consider a more constructive alternative to BDS that is hiding in plain sight.

Today it is the site of the Jordan Gateway Industrial Park, JGIP, a 346-acre special economic zone featuring industries from both countries.

Championed by Israeli Industrialist Shlomi Fogel, with substantial funding from both Israel and Jordan, JGIP has recently seen marked growth.

As with special economic zones elsewhere, the industries in the park are exempt from taxes and tariffs and enjoy other economic benefits, including trade with countries that otherwise embargo Israeli products.

The JGIP model suggests an economic middle ground overlooked by the BDS movement. But the model should be extended to become a special political zone, or SPZ, that can transform the political landscape as microcosms of a new order.

SPZ businesses could be owned by Israelis, Palestinians, or jointly, and workers would come from both sides of the divide.

Placed along the border of the West Bank and Gaza, SPZs would enjoy high degrees of political autonomy from the Israeli government and the Palestinian Authority.

Unlike a standard special economic zone, SPZs would be residential-based. Infrastructure, from schools to municipal services and medical facilities, would be built in the zones, making them substantially self-sufficient. Day-to-day governance would be left to residents. They would have economic interests in the SPZ’s vitality, as well as incentives to sustain integrated binational communities.

Unlike standard special economic zones, political zones would include homes, businesses and self- sufficient services.

Participants working and living in the zones would receive cooperative ownership shares and administrative roles proportional to their tenure. Companies like SodaStream would receive tax benefits for moving into the zones, while gaining access to markets heretofore made inaccessible by the BDS embargo.

New York’s Co-op City, the largest cooperative residential complex in the United States and a project of visionary city planner Robert Moses, is a possible model.

Directed by a community-based corporation, Co-op City contains businesses, a power plant and private law enforcement. Such common-interest housing developments have emerged in the United States and part of the attraction for residents is enhanced participation.

In the Middle East, such developments would also foster new forms of inter-ethnic cooperation.

SPZs should be near transportation networks on both sides of the border, but away from religious shrines, settlements, and strategic military locations. Possible sites include the once planned Khaddourie industrial park between Tulkarem in the West Bank and Herzliya, and the Karni industrial zone outside Gaza City.

Security would be a major concern. Initially, perimeters would have checkpoints like those for crossing into the West Bank and Gaza. But people would not need to come and go on a daily basis, an albatross that has bedeviled other cross-border ventures including Erez and SodaStream.

Autonomous forces, similar to those employed by common-interest developments and university campuses, would maintain internal order. This differs from the JGIP, where Israel and Jordan maintain control over their respective spheres on either side of the Jordan River.

As with SEZs elsewhere, firms like SodaStream would be offered tax and regulatory incentives for setting up plants. Workers would also benefit. Instead of being pilloried for exploiting Palestinian labor, the company could offer employees equity in the company. This would promote a collaborative economic order essential for any viable political settlement.

The BDS movement left SodaStream CEO Birnbaum and other proponents of economic collaboration in untenable positions. Firms operating in the occupied territories are denounced as exploitive, but checkpoint violence and governmental policies prevent most Palestinians from accessing employment outside the territories.

In April, the Israeli government revoked entrance permits for the 74 Palestinians who initially transferred to the new SodaStream plant. Others did not even apply for permits due to fear of travel in Israel.

A movement for boycotts, divestment, sanctions leaves those who support economic collaborations in untenable positions.

Birnbaum maintains that his company operated in the West Bank partly to demonstrate the promise of regional coexistence. Relocating to a special political zone would redouble this commitment.

As a rare Israeli firm that permitted Palestinian managers, SodaStream already featured the equity central to the success of special political zones. Such an arrangement would immunize SodaStream from the criticisms that have led several Scandinavian countries to boycott goods manufactured in the Mishor Adumim industrial park. Peace and profit would be mutually reinforcing.

Small initial successes can have game-changing potential. A successful SPZ could model a viable path towards stability across the region. The pioneers must demonstrate that such a fusion of economics and politics can enable the sort of sustained cross-border collaboration that past ventures, most recently SodaStream, have failed to achieve.

SPZs would not reignite the peace process. Their success would, however, help recreate the propitious climate that existed on both sides of the divide in the early 1990s.

Peace negotiations cannot succeed until the strong Israeli and Palestinian support for an agreement obliterated by Yitzhak Rabin’s tragic assassination in 1995 is restored. SPZs of the sort we are advocating would help do just that by transcending the inextricably stagnant political equilibrium that has prevailed for the past two decades.

Ian Shapiro is Sterling professor of political science at Yale, where he directs the MacMillan Center for International and Area Studies. He is a specialist on democratic theory and politics, with a particular focus on the United States, Africa, and the Middle East. His new book is “Politics Against Domination.”  Nicholas Strong is a student at Yale College and a researcher at the MacMillan Center for International and Area Studies. Copyright © 2016 YaleGlobal and the MacMillan Center. This article was originally published on YaleGlobal Online.