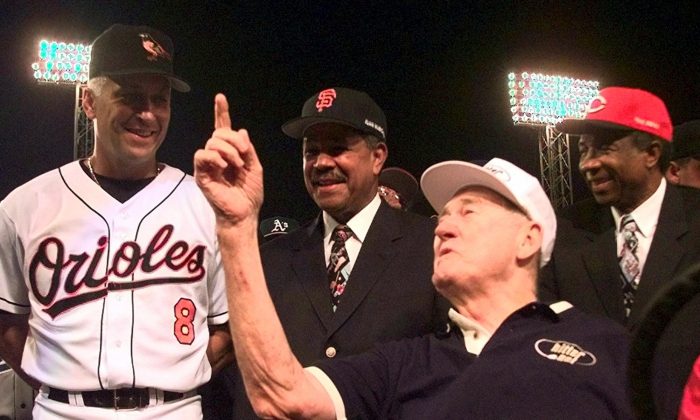 An All-Star Moment at Fenway

As the season moves into July, All Star Baseball is on the minds of many and memories of previous midsummer classics are revived. For me, one of the special games took place July 13, 1999, the 70th All-Star Game.

On hand were the candidates for the All-Century Team as well as the 1999 All Stars. And since it was staged on Boston’s home turf – the center of attraction was Theodore Francis Williams.

Four dollars ($3.80 plus 20 cents tax) was the charge at the All-Star Game for a Footlong Dog with fixings like onions, peppers, diced tomatoes and giardineira.

CHRIS ELIAS:  A lot of the National League stars got their first  look at the manual scoreboard.  Many came inside for a closer view; some signed the walls.

ART DAVIDSON:  Pre- game, the 50 greatest players and current All Stars were lined up on the baselines.

CHARLIE PATTERSON:  PA announcer Sherm Feller said: ” And now ladies and gentlemen, boys and girls, please direct your attention to the doors in center field and welcome the greatest hitter of all time, THE KID, THE THUMPER, THE SPLENDID SPLINTER, TEDDY BALLGAME ———— THEODORE SAMUEL WILLIAMS!!!!!!!”

ART DAVIDSON: As Ted came out in a golf cart from center field to the Fenway Park infield. Spontaneously,  players rushed to embrace Ted.

The 80-year-old legend of legends, clad in a blue shirt and tan pants, was visibly moved. He brushed away tears as he spoke to the players surrounding him.

Then Williams got set for the  ceremonial pitch to Carlton Fisk. With San Diego’s Tony Gwynn steadying him, he waved at Fisk and lofted the ball 40 feet into the glove of the Hall of Fame catcher to cheers, shouts, and applause.

Wasn’t it great!” a visibly moved Williams said afterwards. “It didn’t surprise me all that much because I know how these fans are here in Boston. They love this game as much as any players and Boston’s lucky to have the faithful Red Sox fans. They’re the best.”

LOU GORMAN:  Ceremonies over, we escorted Ted to a luxury box.  Through my Navy contacts I had arranged for a Navy fighter squad flyover over the top of the ballpark. He wanted to meet the pilots. “Look,” I told them, just shake his hand. He’s getting very tired.” But Ted invited them to sit down, and they talked for about ten minutes. A Marine Corps contingent had been down on the field. The very young captain who was in charge asked if some of his guys could meet Ted.

“Just meet him and shake his hand and be brief,” I told the Captain. He made them sit down and talked for another ten minutes.  Ted said being a Major League player was a great honor and being a Hall of Famer was an even greater honor. But the greatest honor of his life was to have the privilege of wearing a Marine uniform.

The American League won the All Star Game, 4-1. Pedro Martinez thrilled the home town fans and everyone else – striking  out the first three batters he faced and a total of five in two innings. He was the game MVP.

JOE CASTIGLIONE:  Pedro is my favorite all-time pitcher, the best pitcher I’ve ever seen. When Pedro pitched, it was an event with Dominican flags flying and all the excitement in the ballpark.

TOM CARRON: The entire All-Star Game experience from the homerun derby to Landsdowne Street — throbbing with people trying to get home runs balls as they came over the Monster,  to Ted Williams being at the heart of it all, to Pedro’s performance, to the Sox taking over a parking lot for the media hospitality, using every nook and cranny, having something  going on everywhere you would turn. . . it was special.