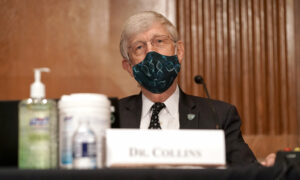 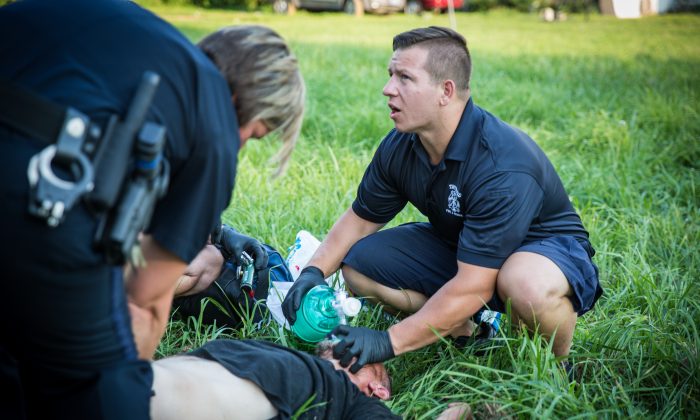 Local police and paramedics help a man who is overdosing in the Drexel neighborhood of Dayton, Ohio, on Aug. 3, 2017. (Benjamin Chasteen/The Epoch Times)
US News

An Addicted County and a Sheriff’s Cry for Help

Opioid addiction is unrelenting in Ohio's Montgomery County, but the sheriff's resources are stretched too thin to make a dent
By Charlotte Cuthbertson
biggersmaller
Print

DAYTON, Ohio—The sheriff of Montgomery County is fighting an uphill battle. He has been fighting it for four years, but it has only gotten worse. His county has the unfortunate burden of being the worst in the nation for opioid overdose deaths, per capita.

His deputies are spending more than half their time responding to overdose calls. One dose of the opioid-blocker Narcan often isn’t enough to revive a patient anymore, and when it does work, he said, 35 percent of the time the addict stands up, walks away, and does it again the next day.

“In our county, we are averaging 10 overdoses a day. Last night, we had 17,” he said. “It fluctuates when we see different product coming in, or a different gang mixing the product. When they put too much fentanyl in it, we have a large amount of overdoses that day.

“Envision this: You’ve got gangs selling this stuff on the streets; the cartel brings it here, and they filter it out to our gangs, on our streets and in our neighborhoods. So they are sitting at the kitchen table stuffing these gelcaps with whatever they want to put in them,” said Plummer.

Seven years ago, there were 127 unintentional drug overdose deaths in Montgomery County. This year, the numbers are on track to hit 800, more than double the number last year.

The synthetic opioids fentanyl and carfentanil are to blame for the spike. Starting in late 2013, several states reported surges in fentanyl overdoses. Between 2013 and 2014, there was a 79 percent increase in deaths related to synthetic opioids, according to the 2016 Drug Enforcement Administration (DEA) heroin report.

Now it’s hard to find heroin on the streets in the county—fentanyl is the new high. It was originally developed as a painkiller and an anesthetic, and is 50 to 100 times more potent than heroin. Two milligrams of fentanyl is a lethal dose for a non-opioid user.

Carfentanil is less common but way more deadly; it is used as an elephant tranquilizer and is 10,000 times more powerful than morphine, according to the DEA. Even a few specks of airborne powder can be fatal.

“Now they don’t want heroin anymore, now they want fentanyl, and so they’re climbing the ladder as to how potent the product is,” Plummer said. “A drug dealer gives somebody a dose of fentanyl or carfentanil, and they overdose and die, then all the addicts seek out that drug dealer because they want the next strongest product. It is a very bizarre addiction.”

Illicitly produced fentanyl is sold alone or in combination with heroin and other substances. It has also been identified in counterfeit pills, mimicking pharmaceutical drugs such as oxycodone, according to the DEA. In 2015, the agency issued a nationwide alert on fentanyl, designating it a threat to health and public safety.

A Glimpse Into the Human Toll of Opioid Addiction

But it is still prescription painkillers, such as OxyContin and Vicodin, that are getting most people hooked in the first place. An estimated 2 million Americans are addicted to prescription painkillers, according to the Centers for Disease Control and Prevention (CDC). Eighty percent of heroin users initiated their substance abuse with prescription drugs—most often by obtaining pills through a friend or family member.

Approximately 52 people in the United States die every day from overdosing on prescription painkillers, according to the CDC.

“We didn’t know we had a pill problem. We then shut down some pill mills—where people could go see a doctor with no patient care and just walk out with a prescription they wanted for only $50 cash,” he said.

“We didn’t know, with shutting those down, that we had that many addicts, and so of course they morph to heroin.”

He called it a “perfect storm.”

“The Mexican cartels then realize we are shutting the mills down, so they flood us with heroin. The heroin is really cheap; it’s only $6 for a gelcap,” Plummer said.

“There is still a mixture of prescription drugs on the streets but they are very expensive and they can get heroin so much cheaper. So they all move to heroin … and then they’re chasing pure fentanyl, then carfentanil.”

The largest population struck by the opioid crisis is white males between the ages of 31 and 39, “which should be your strong working class, not your strong addicted class,” said Plummer.

Fentanyl is being produced clandestinely in Mexico and also comes directly from China, according to the DEA. And Mexican heroin accounted for 79 percent of the total weight of heroin analyzed by the DEA in 2014.

Plummer said Dayton has become a hub for opioid distribution.

“It’s very, very different from the past. In the past, it would go to Columbus, or from Chicago to Dayton. And now it’s coming directly from Mexico to Dayton, Ohio,” he said. “We have highway 75 coming through our community and Interstate 70, two major interstates, so now they can come to Dayton, get on 70, then go east to New York or west to Chicago.”

Plummer said dealers from neighboring Indiana travel to Dayton to buy the $6 gelcaps and then sell them for $20 a pop in Indiana.

In the past, the cartel would handle the dealing, car to car, but now they turn the work over to the local gangs, Plummer said. He said there are a lot of homegrown gangs in the area, such as the Dayton View Hustlers, as well as national gangs like the Crips and the Bloods.

The Mexican cartels “bring up the large shipments, and the gangs distribute it on the streets, and the cartel collects the revenue and then takes it back to Mexico,” he said.

Plummer said an estimated $65 million in drug money is going back to Mexico from his county annually.

“And I can’t even afford a new police car because we are so strapped for finances,” he said, adding that besides the cartels, the only ones who benefit are the funeral homes.

“You see, what these dealers are doing now is, they go to gas stations, and they will throw two to three gelcaps in your car, and these are called testers,” Plummer said. “Then they will toss their business card in there too, ‘Try these. If you like them, call me.’ So if you try one, you’re addicted, and they’ve got you.”

The other major distribution method is much more hidden and harder to intercept. It happens online over the darknet—which masks the user’s location and identity—and through the postal service. Addicts can purchase fentanyl and heroin on a website that can only be accessed using special software. The drugs then get shipped via FedEx or UPS directly to their doorstep.

“We have only one postal inspector in this region, and he is in Kentucky, so there is a huge gap,” Plummer said. “We need more assets in all these hubs. We need dogs sniffing boxes.”

An online darknet marketplace called AlphaBay was seized and taken down by the Department of Justice in July. The site hosted some 220,000 drug sale listings and was responsible for countless synthetic opioid overdoses, the DOJ said in a statement.

Attorney General Jeff Sessions shared the story of Grant Seaver, who was a 13-year-old student in Utah. Seaver died after overdosing on a synthetic opioid that had been purchased by a classmate on AlphaBay.

“The ability of these drugs to so instantaneously end these promising lives is a reminder to us all of just how incredibly dangerous these synthetic opioids are—especially when they are purchased anonymously from the darkest places on the internet,” Sessions said in a speech on July 20.

Instead of shoring up his resources to fight the tide of addiction overwhelming his county, Plummer has been forced to lay off officers due to budget constraints in recent years.

“If I had 20 people to throw at this, I could have 24-hour, continual pressure on this problem, and we could change it,” Plummer said.

He sees the solution as three-pronged: cutting off supply, treating addicts, and preventing the next generation from entering the cycle.

He wants to see tougher measures against drug traffickers and believes the current administration is moving in the right direction.

The department conducts blitzes in cooperation with local police departments. Officers in unmarked cars watch locations like gas stations, which are common places for drug dealing.

“We will watch the drug deal go down, then marked cars will come in and try to stop the dealer and the addicts,” he said. The locations are chosen based on overdose data and complaint calls.

If someone dies from an overdose, the department’s HEAT (heroin eradication apprehension) team investigates the scene for evidence of who the dealer is.

“If you die from that dealer’s product, we try to charge the dealer with involuntary manslaughter. We’ve had two or three cases that were successful already,” Plummer said.

On the addict side, Plummer’s department has set up several initiatives to try to get people into treatment. Deputies, faith-based volunteers, and other volunteers will go to the home of an addict who has overdosed and required Narcan to be revived.

“We go out in your neighborhood, knock on your door, and we educate your family on the dangers of the stuff and what kind of resources are out there for treatment,” he said.

In 2013, Plummer said the department was getting calls from parents, saying, “My child’s addicted, and we have no place to take them, and they’re going to die.”

So the Front Door program was launched, in which a deputy would go to pick up the addict.

“We need to treat these folks and keep them alive. We have to give them another day to fight for their lives,” he said.

But there is always a new challenge.

“The addiction is so great, it’s hard to turn the addict around.”

At the federal level, President Donald Trump instructed his administration to use all “appropriate emergency and other authorities” to respond to the opioid epidemic, in an official statement on Aug. 10.

The president was briefed two days prior by his Commission on Combating Drug Addiction and the Opioid Crisis.

“We’ve got a tremendous team of experts and people that want to beat this horrible situation that’s happened to our country,” Trump said on Aug. 8 in Bedminster, New Jersey.

Attorney General Jeff Sessions traveled to Columbus, Ohio, on Aug. 2 to announce the creation of the Opioid Fraud and Abuse Detection Unit, a pilot program of the Department of Justice.

The unit will delve into data that shows “which physicians are writing opioid prescriptions at a rate that far exceeds their peers; how many of a doctor’s patients died within 60 days of an opioid prescription; the average age of the patients receiving these prescriptions; pharmacies that are dispensing disproportionately large amounts of opioids; and regional hot spots for opioid issues,” Sessions said in a statement.

Sessions is also assigning 12 prosecutors to investigate and prosecute opioid-related health care fraud cases in a dozen locations around the country, including Dayton, Ohio.

Plummer attended the announcement by Sessions and said it was “very encouraging, because we have been experiencing this problem now for over four years and, finally, our federal government is realizing this is turning into an epidemic.”

“It is good to know that the government is taking this seriously and they’re going to throw additional resources at this.”

If you or someone you know needs help for an opioid addiction: