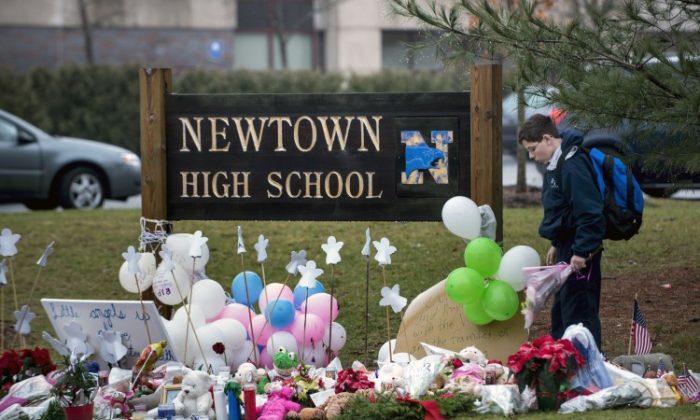 A student brings flowers to a makeshift memorial for the victims of the Sandy Hook Elementary School shooting at the entrance of Newtown High School Dec. 18, 2012 in Newtown, CT. (Brendan Smialowski/AFP/Getty Images)
Opinion

An Action Plan on Guns and Mental Illness

Before being swept up in the massacre at Sandy Hook Elementary School in Newtown, CT, Peter and Nancy Lanza were already a statistic. They were part of the 80 percent divorce rate of parents with autistic children—30 points more than the national average for parents with normal kids.

As a father of a 12-year-old autistic son, I understand the reasons for that higher rate; the stress autism brings to a family, the wedge it drives between fragile relationships. If you think raising a boy through puberty is tough, try doing it with an autistic boy whose emotions range from pangs of sadness to spurts of anger with no apparent trigger.

For whatever reason, the late Nancy Lanza steered her troubled son Adam toward guns and firearms, when she should have steered him away. She made a huge mistake and paid with her life. It also cost the lives of 20 children and a handful of adults at the school—something she never would have wanted.

If she trained him to clean, load, and shoot weapons that mistake could only be explained as a parental blind spot in raising her son. In the end, it was a lifetime of anger in outcast Adam, who suffered from Asperger’s syndrome—a form of autism spectrum disorder (ASD)—culminated in one horrific event before he took his own life.

Like gun ownership, the autism incidence rate is epidemic: One million and counting with 1 in 100 newborns being diagnosed with some form of the disorder. Yet most kids on the spectrum, including my son, would never be able to carry out such an act for two reasons. They are not coordinated enough to do so; they suffer from weak fine-motor skills to poor hand-eye coordination. Second, most are good-natured, possess human empathy, and thus couldn’t be readily trained, directly or indirectly, to be an assassin.

Asperger’s is different from other forms of autism. Those high-functioning children, who can speak, are devoid of human emotion. That deficit played itself out in violent fashion in Newton and its results is what shocked so many Americans as a senseless, depraved act.

I don’t own a gun, because accidents happen. Guns go off when not intended. Sometimes they injure the owner; sometimes they kill a gun owner’s family member. There’s cleaning and maintenance of firearms needed, storing of live rounds, and keeping weapons out of the reach of children, friends and intruders. All of that spells responsibility, lots of it. But when strict measures on safety breakdown or are not in place by gun owners, trouble is only a moment away.

There’s no reason for gun collectors and gun owners to possess automatic weapons. The Second Amendment does state the “right to bear arms.”  But that right does not—and should not—extend to AK-47 assault rifles, Bushmasters, Uzi machineguns, and the like. That amendment isn’t carte blanche to become a one-man army.

Should citizens be able to own a Navy SEAL 50-caliber sniper rifle, referred to as the Beast for its power to destroy? How about a bazooka? Hardly.

Yes, there’s a place for hunting rifles (and a need with exploding deer populations) and pistols and shotguns for self-defense. But to be weaponized like the military, riot police, or counterterrorism unit was never the intention of our founding fathers to give such a broad umbrella definition on the right to bear arms.

As Newtown grieves and America mourns the tragedy, are we any closer as a nation in doing what’s necessary to prevent such tragedies from taking place again? Can we contain the next wave of savagery wrought by assassins—often with no prior record—whether they are mentally ill, disgruntled (fired) employees, or outcast citizens from society?

Even with tougher gun laws and bans on assault weapons, neither would have prevented the tragedy.  Nancy Lanza already owned the weapons used in the crime.

We don’t have to wait for the glaciers of Washington to melt to take action. Citizens of Newtown setup a grassroots platform called Newtown United, but have yet to formulate an idea on exactly what its mission will be.

Here’s one for them: Connect gun owners with corporate and individual donors to state and federal politicians. Guns, money, tax write-offs.

The hybrid model is amnesty meets philanthropy wrapped in tax deductions.  Can such a mash up of competing, agenda-protecting interests, with immense political and cultural divides work? Yes. But there has to be a will.

Sandy Hook Elementary School is that national tipping point to galvanize the collective will.

Why wait months for the government to act, to implement new laws, to ramp up new education programs on gun safety and mental illness, when something can be done today?

How the Program Would Work

Gun owners would drop off their weapons—the amnesty part with no questions asked—at local police stations and military depots in return for cash and/or tax write-offs for the donation to charity.

Corporations and individuals would crowdsource as a backstop. They would pledge to match money for each type of weapon (pistol, revolver, shotgun, rifle, semi-automatic, up to assault rifle) donated. They, too, would receive a tax write-off, as the leftover money would go to charities and public services for mental health and violent crimes.

States are broke. Obamacare hasn’t been implemented yet. Why wait? If President Obama is true to his word that this massacre transcends politics, he should allow U.S. corporations with vast pools of overseas cash a tax holiday to repatriate a portion of that money to be donated into this type of program.

In summary, gun owners would donate their weapons and receive cash/tax breaks in return. Corporations and individuals will donate money to pay for some of those guns, with the rest of the money going to charities, in return for tax deductions and doing the right corporate deed. Charities and mental health services would be funded beyond taxpayer expense.

The program would be a step in reducing the number of lethal arms with gun owners with zero input from the NRA, gun lobby, or any political opposition. This grassroots approach can be replicated across the country from small town suburbs to major cities.

With Mayor Michael Bloomberg such a large proponent to change our leaky gun laws, he can launch this platform and use the deep pockets and high profile of New York City to set an example for the rest of the nation to adopt this model.

This program will honor the dead of Newtown. It would lead to a greater, problem-solving attitude for the acts of mass murder, which have become epidemic and all too commonplace to stomach.

Grassroots ideas can start anywhere, even from this author. But for the idea to turn into a movement there has to be a collective will to give the senseless deaths in Newtown deeper meaning.

James O. Grundvig is a veteran writer living and raising his family in New York. He is also an expert on the business of Big Data—follow his new Epoch Times column here.