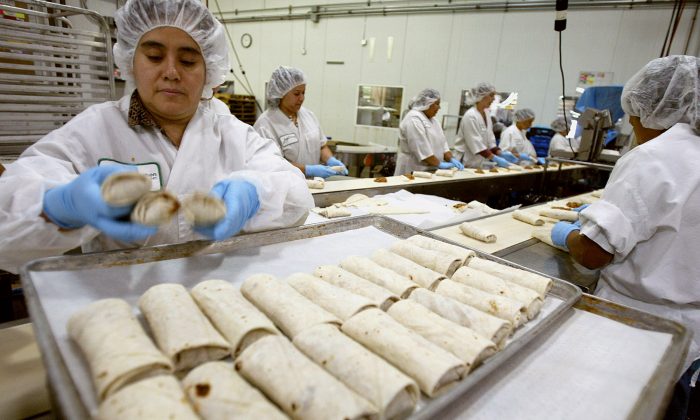 GOSHEN—A consulting engineer for Amy’s Kitchen told the Goshen Town Board on March 10 the company hopes to start construction by the end of the year.

“As you know Amy’s Kitchen has been working diligently on processing our application for the food processing facility,” said Graham Trelstad from engineering and planning firm AKRF in White Plains. “Amy’s would like to begin construction this year … and open in 2018.”

The plan is to build a 367,744-square-foot plant to process and package its frozen organic meals. The $95 million plant could employ as many as 681 people.

Amy’s also plans to build a 200,000-square-foot building to be used for an annual conference for Science of the Soul, a nondenominational spiritual organization that Amy’s Kitchen owners Rachel and Andy Berliner are part of.

Amy’s started the process with the planning board in 2014, but because it first needed to figure out where the water and sewage treatment would be coming from, the process was put on hold.

For sewage they were looking at the city of Middletown, the village of Goshen, and the county’s Mid-Hudson Forensic Psychiatric Center sewage treatment plant off Route 17M that was given state funds last December to be upgraded, partly because of Amy’s.

Amy’s has decided to go with Middletown, and while it has already bought some wells for its water supply, decided to tap into Middletown’s water since it is more suited for its use.

The water and sewer lines will run along the Heritage Trail about 2.5 miles from Middletown to its property located between Route 17M and Echo Lake Road in Goshen.

Another design firm has been working on the plan for crossing the Wallkill River that runs through the property. The crossing would allow Amy’s plant to connect to Route 17M for its main entrance and exit, Trelstad said.

Because of wetlands on the site, Amy’s is working with the Army Corps of Engineers, as well as the New York State Department of Environmental Conservation to mitigate any impact to the endangered Indiana and long-eared bats that are “possibly resident on the site,” Trelstad said.

On March 24, Amy’s plan to go before the planning board with its Draft Environmental Impact Statement (DEIS) and if all goes well, get a notice of completeness by the planning board’s April 21 meeting, with a public hearing in mid-May.

By late July it hopes to have the Final Environmental Impact Statement (FEIS) and have its State Environmental Quality Review (SEQR) finding statement by August.

“We’ll have to work hard, they’ll have to work hard,” said Goshen Supervisor Doug Bloomfield about its ambitious timeline. “If they’re late getting it [paperwork] to us as they have been in the past, we’ll still go at it with a vengeance, but … they’re going to miss the schedule because of them, not us.”