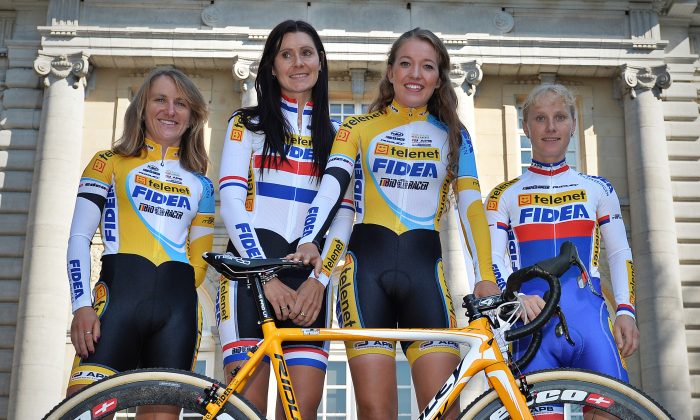 Amy Dombroski, left, died during training in Europe. She is pictured here on Oct. 1, 2013 with ritish Nikki Harris, Dutch Sophie De Boer and Czech Pavla Havlikova during the presentation of the Telenet - Fidea cyclocross team for the upcoming 2013-2014 season/ (David Stockman/AFP/Getty Images)
Cycling

After Amy Dombroski died in Europe during training on Thursday–she was hit by a truck near Baal, Belgium–fellow cyclists from both inside and outside her native Boulder expressed their sympathies and shock.

“It’s astonishing when you realize how fragile our lives are and how easily we take for granted that we will see tomorrow… Farewell Amy,” said Liz Hatch, also via Twitter.

Kristin Weber, a friend and cyclist who is also from Boulder (in Colorado), told the Daily Camera that she remembered Dombroski as  “petite firecracker with a heart of gold,” and as a role model for the women’s cyclocross community.

“My heart breaks for the close friends, family and our entire cycling community that is reeling from this news,” Weber said.

Barry Lee, local race organizer and Sanitas Sports founder, said she gave him suggestions on how to attract more women to the sport.

“She could make anyone feel comfortable and at ease on or off the bike,” Lee said. “That is unique for a top athlete. The community and sport has had a tremendous loss.”

Jamey Driscoll, a professional cyclist who was a childhood friend, said that she will be missed.

“She was always charismatic, but she was much more outgoing when she was cycling,” he said. “She was personable and talkative. It didn’t really matter who you were, or whatever. She was just as happy to see me, who she’s known for a very long time, as someone she’d just met and was into cycling at a bike race. And that’s really cool.”