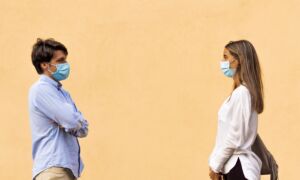 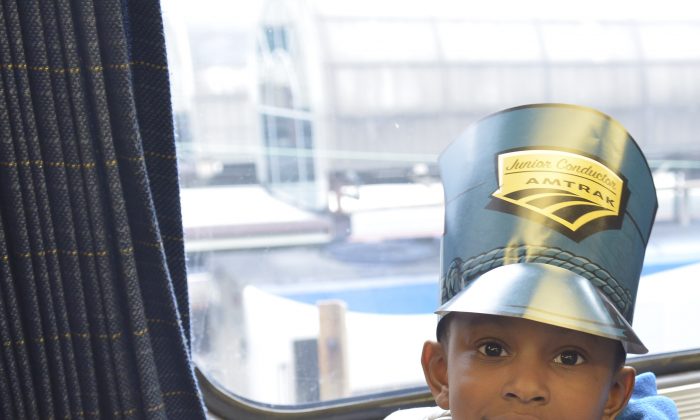 A guest at Amtrak’s National Train Day at Union Station in Washington, D.C., May 10. (Kris Connor/Getty Images for Amtrak)
News

For long distance train travel in America, there is good news and there is bad news.

I was in The Amtrak Crescent dining car eavesdropping on the conductor. He was the personification of jovial.

Like the Roman god Jove, he had a fine beard, strong shoulders, and an expansive manner. I saw him josh crew members with respectful humor and heard him get on his cell to track down the owner of a lost watch. “We didn’t want you to think it was gone forever.” He called ahead to Baltimore to resolve a lost luggage mystery. Maybe he had a touch of Mercury, the messenger god.

On the other hand, I was hanging out there because the passenger car I spent a long night in was feeling and looking like a Heironymous Bosch painting—the kind where souls are getting the big pay back, as James Brown would say. Contorted bodies, moans (OK, they were asleep, not in the netherworld, but still.)

It’s almost mandatory to say America is the greatest country in the world. My patriotic heart tells me so. My jaundiced eyes tell me there are things we could do better. The government-funded trains of Europe and Japan leave ours in the dust. You know they do.

To be fair, I have been to a country where you take your life in your hands to ride the train. That is gloriously beautiful, lovable, musical, South Africa, where bandits afflict train passengers.

Hire a car, with an armed driver, in South Africa. The exchange rate will make it affordable. Still go there, it’s amazing. Just don’t ride the train.

I felt entirely confident to ride 870 miles, unescorted, unarmed, absentminded, and female. This is nothing to sneeze at. I met nothing but courtesy and kindness, including from the Amtrak staff.

It was an experiment to broaden my travel repertoire.

Air travel gets meaner and meaner, as the poor airlines keep trying to squeeze a tinier and tinier profit margin out of us.

Every time I book a flight, ads appear asking me to pay for 2 1/2 inches of more knee room or the chance to embark with a bit of dignity intact. TSA pre-check. Shoes on! Laptop in! Only $85 for the privilege! Feh.

I say if the NSA has been snooping as much as we have learned it does, doesn’t the TSA already know that I am as harmless as a dove?

So the idea of just getting on a train without the many idiocies at the airport spoke to me.

I left the house in Atlanta at 7 p.m. and arrived at Penn Station in New York at 3:30 p.m. the next day. This threw off my work. Give me a bullet train!

I met a law enforcement professional who said she “never flies,” who was going to New Jersey to bury her sister. I saw venerable elders with canes and bent backs. I talked to one person who said an inner ear problem makes it impossible to fly.

For them, and for me, who is tired of the TSA, Amtrak met a need.

Amtrak is publicly funded. Not funded enough, in my opinion. Being from Atlanta, I am keenly aware how big a return can come from public investments in travel infrastructure. Atlanta is the capital of the South because Mayor William B. Hartsfield worked to build a travel hub. Atlanta’s many corporate and NGO headquarters flow from that. I’d like to see the government invest in high-speed rail everywhere. It would have tremendous benefits.

When night flying became a thing in the 1920s, Hartsfield “made sure the city installed beacon lights so that Candler Field could operate twenty-four hours a day,” according to the New Georgia Encyclopedia. He was looking ahead. It’s not easy to do that, but it’s one difference between mediocre and great leadership. Investing in high-speed rail would be like installing those lights.

I asked for comments from people about the need for a publicly funded Amtrak. There was a yin and a yang.

Matthew Reischer, CEO, LegalAdvice.com, wrote, “The fallacy that government can provide ‘a free lunch,’ is a cancer on the American capitalist system.”

Comedian Dan Nainian, who takes the Acela Express each week, wrote, “Since I’m trying to do
as much as I can for the environment, I love taking public transportation.”

Me, I vote for Mayor Hartsfield.