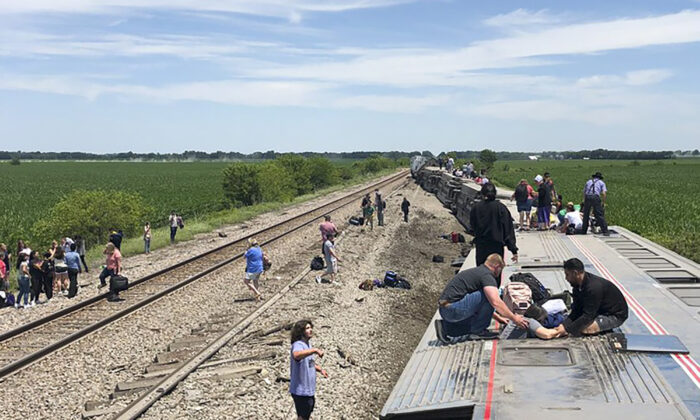 An Amtrak passenger train lies on its side after derailing near Mendon, Mo., on June 27, 2022. (Dax McDonald via AP)
Crime and Incidents

Dozens of people were injured and several died when an Amtrak train derailed in Missouri, according to local officials on Monday.

Cpl. Justin Dunn, a spokesperson for Missouri State Highway Patrol Troop B, told CNN authorities are trying to determine the number of people who died. Eric McKenzie, the superintendent of Chariton County Ambulance Service, said that several people died and up to 50 are injured.

The train was heading from Los Angeles to Chicago when it collided with a truck in Mendon, Missouri, the rail company said. It noted that there are “early reports of injuries.”

“There are approximately 243 passengers onboard with early reports of injuries,” Amtrak said in a statement. “Local authorities are currently assisting customers and we have deployed Amtrak resources to assist.”

Officials in Missouri are “currently assisting customers and we have deployed Amtrak resources to assist. Additional details will be provided as available,” the statement said.

Ron Goulet of Flagstaff, Arizona, told a news website that the crash appears to be a “mass casualty incident.”

“They’ve got every rescue helicopter and crew here from every direction,” he said. “We are in Chariton County, Missouri. The train toppled over on its side. Every seat was sold out full, and they were packing people into the observation car because they were so full. There are plenty of people on back boards being taken [away] by paramedics.”

On social media, Amtrak wrote that it is “aware of the incident with Train 4 and is working with local authorities,” adding, “Please continue to check back for updates. We’re currently experiencing longer than usual hold times, but if you need immediate assistance, please call or text 1-800-USA-RAIL.”

A photo of the scene uploaded online shows passengers sitting near at least four overturned Amtrak cars. People who live in the area told Fox4 Kansas City that seven cars derailed in the incident.

“It’s a terrible situation, I do know that several cars have been derailed. We do believe there could be some fatalities, but again it’s way early on,” Missouri Gov. Mike Parson said in a statement, according to the Fox affiliate station. “It’s very unfortunate any time you have a derailment of a train and multiple cars, it’s not a good day.”

It comes a day after three people were killed and two more were injured after an Amtrak train crashed into a vehicle that was on train tracks near Brentwood, California, on Sunday. All of the victims were inside the vehicle, not the train, officials told media outlets.