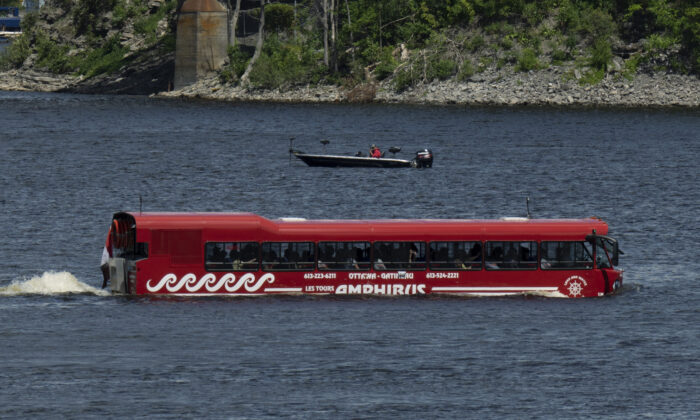 A fisherman watches an amphibious tour bus pass by in the Ottawa River in Ottawa, July 29, 2022. (The Canadian Press/Adrian Wyld)
Canada

No injuries have been reported after an amphibious tour bus crashed this morning into the gates at 24 Sussex Drive, the prime minister’s unoccupied official residence.

Etienne Cameron, a co-owner of Lady Dive Tours in Ottawa, said the company is investigating the crash involving one of its vehicles and the driver, whom he did not immediately identify, was the only person on board.

Photos posted to social media this morning show a red “Amphibus” appears to have veered off the eastbound side of Sussex Drive onto the sidewalk and crashed into the black metal gates outside the residence.

Later in the morning, a heavy tow truck moved the bus farther down the street, near the French embassy. While the bus didn’t appear to sustain much damage, a large section of the fence had been knocked down entirely and rocks and rubble were strewn across the ground.

Police tape was strung around the scene and staff from the National Capital Commission, which is the Crown corporation responsible for preserving the capital area, were at the site.

The bus driver left the area without speaking to reporters. Lady Dive Tours operations manager Leon Harris, who remained at the scene, said it’s still unknown how the crash occurred.

“Something happened and the bus lost control,” he said.

He said the bus will be towed to a garage to be examined and will be off the road for the season.

Cameron said the crash happened during a routine “morning check” during which a driver takes the bus out for a spin prior to tourists getting on board.

Ottawa police said they received a call about a single motor vehicle collision involving a commercial vehicle at 9:21 a.m., and confirmed there are no reported injuries.

The residence is not occupied by Prime Minister Justin Trudeau due to the need for extensive repairs. He lives at Rideau Cottage on the Rideau Hall grounds, though he’s currently on vacation in Costa Rica.