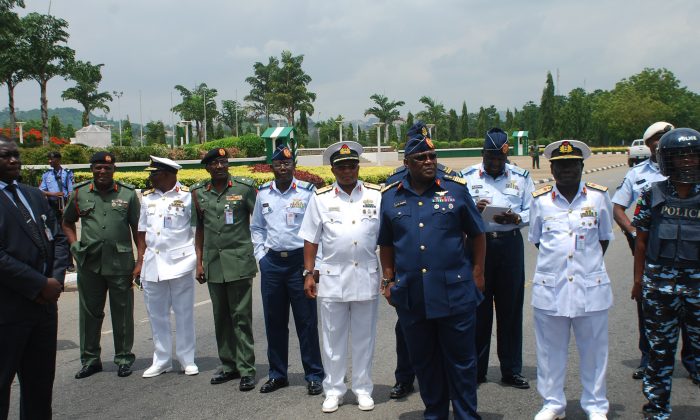 LAGOS, Nigeria—Nigerian military abuses have caused the deaths of some 8,000 civilians in the fight against Boko Haram extremists, Amnesty International said in a report released Wednesday. On the same day, the terror group was suspected of setting off a deadly bomb blast in a northeastern Nigerian city.

“The Nigerian military, including senior military commanders, must be investigated for participating in, sanctioning, or failing to prevent the deaths of more than 8,000 people murdered, starved, suffocated, and tortured to death,” said Amnesty.

If correct, those figures would exponentially increase the estimated toll from the nearly 6-year-old Islamic uprising, put at about 13,000 dead.

Nigeria’s Ministry of Defense denounced the report as “biased” and another attempt by the organization to “blackmail” the military hierarchy.

The soldiers have detained more than 20,000 people—some boys as young as 9 and often on scant evidence.

Boko Haram has been fighting to impose Islamic Law across Nigeria’s north, massacring civilians and kidnapping thousands of women and children, but Amnesty alleges that the military has also committed atrocities.

The soldiers have detained more than 20,000 people—some boys as young as 9 and often on scant evidence—and then held them in brutal conditions that resulted in many deaths, alleged the report.

“Former detainees and senior military sources described how detainees were regularly tortured to death—hung on poles over fires, tossed into deep pits or interrogated using electric batons,” said the report.

It also said the chiefs of defense and army staff, and their two predecessors, should be investigated for potential command responsibility.

Amnesty said it interviewed 412 people over several years for 130-page report, including victims, relatives, witnesses, and activists as well as military officials.

The military spokesman Maj. Gen. Chris Olukolade said past allegations had been investigated and there had been no proof to justify prosecution.

In his inaugural address Friday, Buhari promised to investigate any alleged abuses.

Such reports have strained relations between the United States and Nigeria because U.S. laws prohibit sales of certain weapons to the countries of military forces accused of gross human rights violations.

An explosion that thundered across Nigeria’s northeastern city of Maiduguri on Wednesday killed at least 11 people, as a Nigerian general took command of a multinational force fighting the extremist group Boko Haram.

Panicked soldiers fired into the air, witnesses said, adding to the fear and confusion during the rush hour attack on Baga Road. The blast was followed by a blinding sandstorm and then the first rains of the year, hampering rescue efforts.

Witness Issa Audu said he counted 11 bodies before he fled.

Maiduguri, the city where Boko Haram was created, has suffered daily attacks that have killed more than 50 people since the weekend. They include suicide bombs, planted bombs, and rocket-propelled grenades fired into homes as people slept.

The attacks started after newly inaugurated President Muhammadu Buhari announced on Friday he is moving the command center for the fight against Boko Haram to Maiduguri, at the heart of the war zone against Nigeria’s home-grown Islamic extremists.

The Nigerian army “remains a virile fighting force … capable of routing Boko Haram,” Buhari declared Wednesday on a visit to Niger, which is contributing troops and hosting hundreds of thousands of Nigerian refugees from the violence.

The appointment came the day before he is scheduled to visit N’Djamena, the Chadian capital that is the headquarters of the multinational force.

Before his election, Buhari, a retired major general who was briefly a military dictator in the 1980s, had said the presence of foreign troops on Nigerian soil was “a national disgrace.”

He has promised to cooperate fully with Chad and Niger, which had complained that a lack of cooperation was hampering the war.

Battle-hardened Chadian troops took the lead in an offensive this year that drove Boko Haram from northeastern towns where the extremist group had declared an Islamic caliphate.

But the Chadians have had to retake some Nigerian towns seized back from Boko Haram several times because Nigerian troops did not arrive to secure them.

The extremists continue hit-and-run attacks and suicide bombings from a northeastern forest stronghold.