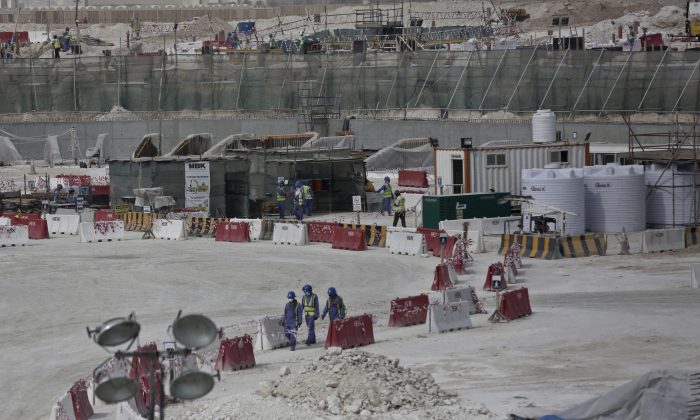 FILE - In this May 4, 2015, file photo taken during a government organized media tour, foreign workers walk between safety barricades at the site of the pitch of the Al-Wakra Stadium that is under construction for the 2022 World Cup in Doha, Qatar. Migrant laborers faced abuse that in some cases amounted to forced labor while working on a stadium that will host soccer matches for the 2022 World Cup in Qatar, a new report released by Amnesty International alleged Thursday, March 31, 2016. (AP Photo/Maya Alleruzzo, File)
International

DUBAI, United Arab Emirates—Migrant laborers faced abuse that in some cases amounted to forced labor while working on a stadium that will host soccer matches for the 2022 World Cup in Qatar, a new report released by Amnesty International alleged Thursday.

Rights groups and news organizations have previously raised serious concerns about working conditions in Qatar, but the latest Amnesty report stands out because it links alleged mistreatment directly to work on a World Cup venue.

The group’s findings will intensify pressure on Qatar to accelerate labor reforms as the tiny and immensely rich Gulf country races to transform itself with sweeping infrastructure projects ahead of the games.

Amnesty compiled the 52-page report based on interviews from February to May last year with 132 construction workers at the Khalifa International Stadium, one of several arenas that will host World Cup matches. The London-based group also interviewed 99 migrants doing landscaping work in a surrounding sports complex that is not directly related to the games, and three other gardeners working elsewhere.

Foreigners account for roughly 90 percent of the 2.5 million people living in Qatar, many of them low-paid migrant workers from South Asia. Most of the workers interviewed in the Amnesty report were from Bangladesh, India and Nepal.

All of those interviewed reported some kind of abuse, including squalid or crowded living quarters, salary payments being withheld for months, and measures including passport confiscation that make it difficult to leave the country. Migrant workers elsewhere in Qatar have reported similar problems previously.

Many in the Amnesty report said their sponsoring employer failed to obtain or renew their working permits, leaving the workers subject to fines and detention.

Each reported going into debt to pay recruitment fees — illegal under Qatari law — ranging from $500 to $4,300 to secure work. Most discovered on arrival that they would be paid less than promised by recruiters back home. Some of those interviewed reported earning basic salaries of well below $200 a month, plus allowances of around $50 a month for food.

The report’s most damning findings center on what Amnesty says is evidence of forced labor involving workers employed on the refurbishment of the Khalifa stadium, a venue first built in the 1970s that is being overhauled to host World Cup matches.

The forced labor allegations involve workers employed by at least one small labor supply company contracted to provide manpower on the stadium project. The report includes comments from five workers who described being forced to work against their will after trying to leave or refusing to work because of pay disputes.

One worker who told Amnesty he tried to return home because of consistently late pay alleges his boss threatened to withhold his salary and told him to “keep working or you will never leave.”

Mustafa Qadri, Amnesty’s Gulf migrant rights researcher, said he believes many other workers face similar situations, but confirming that is difficult because of the challenges in reaching workers and the risks they face in speaking to researchers.

He acknowledged that Qatari authorities have taken some steps to improve labor conditions, but said they must put far more priority on the issue as preparation for the games intensifies.

“Clearly there’s a problem here. Whatever they’ve done has not been enough to prevent abuse,” he told The Associated Press. “What we’d like to see is not excuses but actual action.”

Qatar has announced planned changes to its “kafala” employee sponsorship system, which critics say leaves workers open to exploitation and abuse. The system, versions of which are used throughout the oil-rich Gulf states, gives bosses considerable power over workers by effectively binding them to a given employer and, in Qatar’s case, forcing them to secure exit permits before they can leave.

Changes signed into law by Emir Tamim bin Hamad Al Thani last October are designed to make it easier for employees to change jobs or leave. Workers still won’t be able to immediately change jobs or depart whenever they want, however, and the changes don’t take effect until later this year.

The government has already made other changes, including moving some laborers into improved accommodations and instituting a “wage protection system” to tighten oversight of salary payments.

It says it is committed to doing more, calling its reform efforts a “work in progress.” It said in a statement Thursday that worker welfare is a top priority.

“Though many of the points raised by Amnesty have already been addressed through recent legislative changes, we are concerned by a number of allegations contained within the report,” the government said in a statement. The government ministry overseeing labor issues will investigate contractors named in the report, it added.

The labor regulations at World Cup sites are meant to be particularly stringent.

The Supreme Committee for Delivery and Legacy, which is leading Qatar’s development of tournament venues and other projects, requires contractors to adhere to specific worker welfare standards that it and outside auditors monitor.

The Supreme Committee acknowledged in a statement to The Associated Press that Amnesty “identified challenges in worker conditions existing during early 2015,” but said many of the issues raised in the report were addressed by June because of its own monitoring and enforcement efforts.

Problems cited by Amnesty “were not representative of the entire workforce” and were limited to four out of more than 40 companies working on the stadium — three of which are currently banned from World Cup projects, it added.

“The tone of Amnesty International’s latest assertions paint a misleading picture and do nothing to contribute to our efforts,” it said. “We have always maintained this World Cup will act as a catalyst for change — it will not be built on the back of exploited workers. We wholly reject any notion that Qatar is unfit to host the World Cup.”

Still, pressure is mounting. The International Labor Organization earlier this month gave Qatar one year to act on findings by an ILO delegation or face the possibility of a formal “commission of inquiry” by the U.N. labor agency.

FIFA said in a statement it remains “fully aware of the risks facing construction workers in Qatar and of the opportunity that FIFA, together with other stakeholders, has to facilitate the improvement of working conditions.”

FIFA’s head of sustainability, Federico Addiechi, added that he is confident steps taken by the Supreme Committee are “appropriate” and have improved workers’ situation.

“Of course many challenges remain, but we are on the right track,” he said.