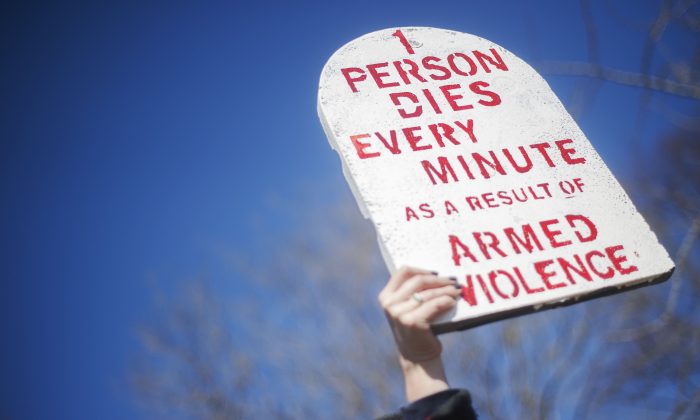 A demonstrator from Amnesty International holds up a placard outside the White House on March 22, 2013 in in Washington., (JIM WATSON/AFP/Getty Images)
US News

Amnesty International has issued a “travel advisory” for would-be visitors to the United States, claiming that “rampant gun violence” has “become so prevalent in the United States that it amounts to a human rights crisis.”

The gimmicky attempt to gain publicity for the agenda of the New York-based activist group imitates the U.S. Department of State’s travel advisory system that’s aimed at keeping Americans abreast of dangerous conditions in countries abroad that they may visit. The travel warning deviates from the group’s traditional mission of campaigning against human rights abuses, urging the release of political prisoners, and seeking to spare the lives of those sentenced to death.

“Travelers to the United States should remain cautious that the country does not adequately protect people’s right to be safe, regardless of who they might be,” said Ernest Coverson, campaign manager for the End Gun Violence Campaign at Amnesty International USA.

“People in the United States cannot reasonably expect to be free from harm—a guarantee of not being shot is impossible. Once again, it is chillingly clear that the U.S. government is unwilling to ensure protection against gun violence.”

Donny Ferguson, president of Americans for a Better Economy, an Alexandria, Virginia-based nonprofit organization, told The Epoch Times that Amnesty International is misguided.

“Even NPR admits the U.S. is 28th in the world in gun deaths, including suicides, but Amnesty is ignoring them to obsessively attack Americans. This is just another example of liberalism’s belief the United States is a mistake which must be corrected and the only question is what to use as the eraser,” Ferguson said.

The U.S. statistic appeared on the NPR website on Aug. 5 and was based on a report by the University of Washington’s Institute for Health Metrics and Evaluation.

Critics also point out that while the U.S. Constitution guarantees various civil rights, no government can promise its citizens complete protection from criminal assaults. Instead, the Second Amendment to the Constitution guarantees an individual’s right to keep and bear arms, as the Supreme Court ruled in District of Columbia v. Heller (2008) and in McDonald v. City of Chicago (2010).

Amnesty International isn’t the only activist group that is suspicious of the Second Amendment.

As Jacob Sullum noted in an article for Reason in April, the American Civil Liberties Union (ACLU) is selective in the constitutional rights it chooses to defend.

The ACLU “is prepared to defend the civil liberties of current or would-be gun owners, but only if the policies they challenge impinge on something more than the Second Amendment right to keep and bear arms.”

According to the U.N. Office on Drugs and Crime, the U.S. murder rate of 5.30 intentional homicides per 100,000 of population (as of 2017) places the United States at 88th in the world, tied with Zambia, a bit above the middle on the list of 230 nations and territories studied.

The U.N. agency explained in a report that “within the broad range of violent deaths, the core element of intentional homicide is the complete liability of the direct perpetrator, which thus excludes killings directly related to war or conflicts, self-inflicted death (suicide), killings due to legal interventions or justifiable killings (such as self-defense), and those deaths caused when the perpetrator was reckless or negligent but did not intend to take a human life (non-intentional homicide).”