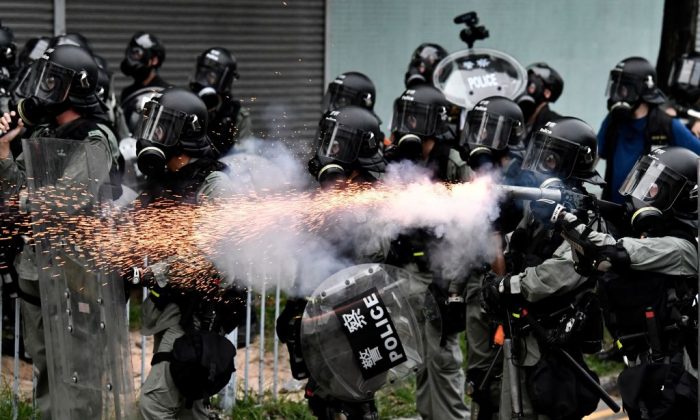 A policeman fires tear gas to disperse protesters during a demonstration in the district of Yuen Long in Hong Kong on July 27, 2019. (Anthony Wallace/AFP/Getty Images)
HK Current Affairs

Violence again erupted in Hong Kong’s Yuen Long on the evening of July 27 after hundreds of thousands of protesters gathered for a peaceful march in the afternoon to oppose an attack a week earlier by suspected triad members at the local metro station.

Amnesty International issued a statement following the violence, saying that the actions of the local police had been “unacceptable.”

“The violent scenes in Yuen Long tonight were in part because Hong Kong police chose to inflame a tense situation rather than deescalate it,” Amnesty said. “For police to declare today’s protest unlawful was simply wrong under international law.”

It added: “While police must be able to defend themselves, there were repeated instances today where police officers were the aggressors; beating retreating protesters, attacking civilians in the train station, and targeting journalists. Alarmingly, such a heavy-handed response now appears the modus operandi for Hong Kong police and we urge them to quickly change course.”

On July 21, a group of men in white t-shirts, wielding wooden or metal poles, rushed into the Yuen Long metro station and began beating passengers, according to footage taken by commuters and journalists at the scene. Democratic party lawmaker Lam Cheuk-ting was among the at least 45 injured.

The attackers targeted any passengers dressed in black because they were likely to have taken part in a peaceful march earlier in the day against the Hong Kong government’s extradition bill. The march drew 430,000 people.

A number of attackers have since been arrested by the police, who noted that some had triad backgrounds.

The attacks triggered the UK government, the U.S. State Department, and multiple rights groups, including Amnesty International, to issue statements expressing concerns about the violence.

The march on July 27, named “Reclaiming Yuen Long,” was organized by Hong Kong resident Max Chung to call on the government to meet seven demands, including the withdrawal of the extradition bill and an independent investigation into the violent civilian clashes on July 21.

The police did not grant Chung the approval for the march, and the Hong Kong’s Appeal Board on Public Meetings and Processions turned down his appeal of the decision on the grounds that such a march could pose threats to public safety given the events on July 21.

Pro-democracy lawmaker Eddie Chu and Leonard Cheng, President of Lingnan University of Hong Kong, were among the participants.

About 288,000 people took part in the march, according to Chung’s estimate.

But the peaceful march quickly descended into clashes when police began firing tear gas, rubber bullets, and sponge grenades to disperse the crowds. Protesters were reportedly throwing rocks and bottles at police.

Hong Kong media reported that several reporters were hit by the police’s rubber bullets. Some protesters eventually retreated into Yuen Long metro station. Then, at around 10 p.m. local time, violence escalated as police moved in on protesters inside the station. According to Hong Kong media HKFP, baton-wielding police cornered protesters and some of them fell to the ground as people tried to flee. Bloodstains could be seen spattered on the floor.

At around 1 a.m. on July 28, the Hong Kong Hospital Authority announced that 24 people had been injured, with 2 in serious condition.

Hong Kong media The Stand News reported that 11 men aged between 18 and 68, had been arrested on charges including unlawful assembly, assaulting police officers, and possession of offensive weapons.

The Hong Kong government has since issued a statement, calling the Yuen Long march “illegal” and condemning “radical protesters” for deliberately breaking the law by charging at police cordon lines and blocking roads. It also stated that police would take serious follow-up actions with arrested protesters.

Pro-democracy lawmaker Claudia Mo in a press conference at noon on July 28 condemned the police again for use of excessive force on citizens, social workers, and journalists. She added that the police’s ban on the march, in contradiction to Hong Kong’s Basic Law that guarantees the freedom of assembly, had created a “vicious cycle” provoking more people to come out and protest.

At around 3 p.m. local time on July 28, Hong Kong media HK01 reported that Max Chung had been taken away by police on the charge of inciting unlawful assembly. Local police have since confirmed the arrest.