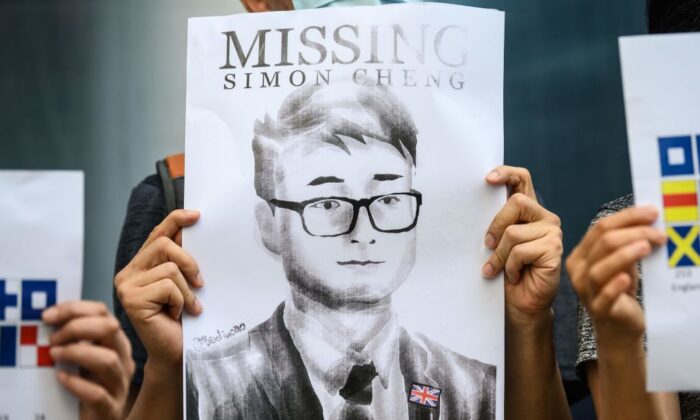 Activists gather outside the British Consulate-General building in Hong Kong on Aug. 21, 2019, following reports that Simon Cheng, a Hong Kong consulate employee had been detained by mainland Chinese authorities on his way back to the city. (Anthony Wallace/AFP via Getty Images)
China-US News

Hong Kong citizen Simon Cheng’s account of being subjected to torture while in Chinese custody details a common tactic by Beijing, according to Amnesty International, which has condemned the Chinese regime’s intimidation actions.

“The horrific abuse Simon Cheng described in his testimony, such as being shackled and placed in stress positions, is in line with the endemic torture and other ill-treatment in detention we have repeatedly documented in mainland China,” Patrick Poon, a China researcher for the human-rights organization, said in a Nov. 20 press release.

“This appears to be a callous attempt by Chinese state officials to intimidate anyone perceived to be linked to the Hong Kong protests, and chillingly illustrates the inherent dangers of the proposed extradition bill that sparked the unrest in the first place,” he said.

Poon called on Chinese authorities to investigate and hold any police responsible for Cheng’s torture and other ill-treatment.

On Aug. 21, China’s foreign ministry confirmed that he was being held under 15-day administrative detention in Shenzhen on suspicion of violating China’s Public Security Administration Punishment Law, which renders punishment for those who “disturb public order” or “endanger public safety.”

Cheng was released on Aug. 24.

“I was hung (handcuffed and shackled) on a steep X-Cross doing a spread-eagled pose for hours after hours,” Cheng wrote.

“Sometimes, they ordered me to do the ‘stress tests,’ which includes extreme strength exercise such as ‘squat’ and ‘chair pose’ for countless hours. They beat me every time I failed to do so using something like sharpened batons.”

“I was suspected of being a mastermind and British proxy to incite and organize the protests in Hong Kong,” he wrote. Chinese state media and Beijing officials have consistently pushed the narrative that the current pro-democracy protests in Hong Kong are fomented by foreign countries.

He wrote that he was filmed while reciting a forced written confession. He was pressured into saying that he “betrayed the motherland” and “solicited prostitution,” the charge Chinese authorities placed on him.

Authorities threatened Cheng that he would be taken to China again if he spoke publicly about his experience in detention, according to his post.

Cheng wrote that a secret police officer told him that “batches after batches of Hong Kong protesters had been caught, delivered, and detained in mainland China,” though the claim could not be verified. Cheng also said he saw 10 young “criminal suspects” being interrogated at the detention center, whom he suspected to be Hong Kong protesters.

British Foreign Secretary Dominic Raab summoned China’s ambassador and expressed “outrage at the brutal and disgraceful treatment of Cheng in violation of China’s international obligations,” according to a Nov. 20 government press release.

Meanwhile, China’s Foreign Ministry spokesperson Geng Shuang, at a daily press conference on Nov. 20, claimed that the police “guaranteed all his lawful rights” when Cheng was detained.

Ongoing protests in Hong Kong were ignited by opposition to an extradition bill, since withdrawn, that would have allowed the Chinese regime to transfer individuals from Hong Kong to face trial in China’s courts, which are notorious for the absence of rule of law.

Protesters have since broadened their demands to call on the city government to fulfill universal suffrage and conduct an independent investigation into police use of force against demonstrators.

Patrick Nip, Hong Kong’s constitutional and mainland affairs minister, said Hongkongers could reach out to the city government for assistance if they encounter troubles in China, in response to a media question about Cheng’s account of torture on Nov. 20, according to Hong Kong media.

Banks added: “The #HongKong protests are giving America, and the free world, a glimpse into what life is like under the thumb of Chinese Communist Party.”