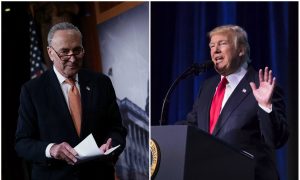 The White House released its plan on Thursday night to provide amnesty to 1.8 million illegal immigrants, including around 700,000 current recipients of the Deferred Action for Childhood Arrivals (DACA) program.

White House Chief of Staff Gen. John Kelly stayed behind to work on the plan as Trump went to Davos. Senior advisor Stephen Miller presented the plan to Republicans on Thursday over a conference call.

See the full framework released by the White House below:

Securing the Southern and Northern border of the United States takes a combination of physical infrastructure, technology, personnel, resources, authorities, and the ability to close legal loopholes that are exploited by smugglers, traffickers, cartels, criminals and terrorists.

The Department of Homeland Security must have the tools to deter illegal immigration; the ability to remove individuals who illegally enter the United States; and the vital authorities necessary to protect national security.

These measures below are the minimum tools necessary to mitigate the rapidly growing surge of illegal immigration.

Provide legal status for DACA recipients and other DACA-eligible illegal immigrants, adjusting the time-frame to encompass a total population of approximately 1.8 million individuals.

The Visa Lottery selects individuals at random to come to the United States without consideration of skills, merit or public safety.