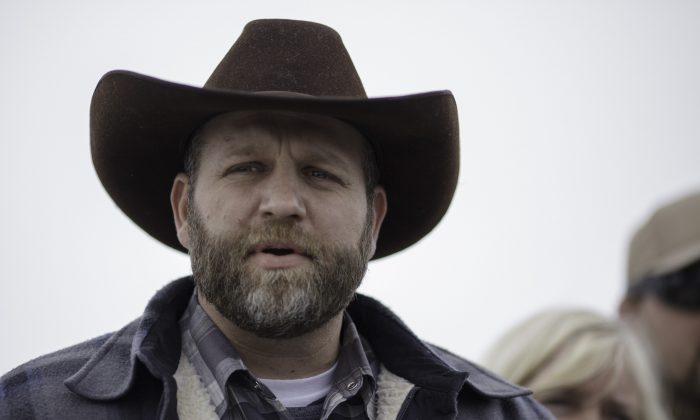 Ammon Bundy, one of the sons of Nevada rancher Cliven Bundy, during a news conference at Malheur National Wildlife Refuge, near Burns, Ore., on Jan. 6, 2016. (AP Photo/Rick Bowmer)
US

Ammon Bundy, one of the leaders of the Oregon militiamen that occupied a wildlife refuge, is asking the remaining members of the group to “please stand down” and “go home.”

The statement was read outside the U.S. District Court by his lawyer, Mike Arnold, and released one day after Bundy’s arrest. During the arrest, one of the militiamen, Lavoy Finnicum, was shot and killed.

“I want to address my beloved friend Lavoy Finnicum. Lavoy is one of the greatest men and greatest patriots I have ever seen. His love for this country ran deep through the blood he gave yesterday. And I mourn for him and his family. I’m praying for you fervently in every prayer,” the statement reads.

Bundy then urged the remaining militiamen to go home, and said that the battle was “in the courts” now.

“To those remaining at the refuge, I love you. Let us take this fight from here. Please stand down. Go home and hug your families,” the statement reads. “This fight is ours for now in the courts. Please go home.”

Bundy also asked the federal government to allow the militiamen to go home without prosecution.

The militia leader and six co-defendants are currently in a Portland jail, and are scheduled for a detention hearing in federal court on Friday, Oregon Live reports. They face felony charges of conspiracy to impede federal officers.

The group had occupied the Malheur National Wildlife Refuge, near Burns, Oregon, since Jan. 2.