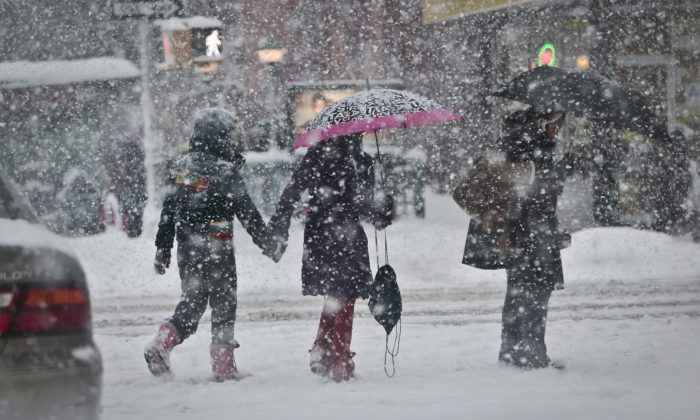 Pedestrians walk along Nostrand Avenue as snowfall blankets the area in the Flatbush section of the Brooklyn borough of New York, on Feb. 13, 2014. (AP Photo/Bebeto Matthews)
New York

Roker, who was in Russia for the Winter Olympics but has a daughter in New York’s public schools, said on Twitter that the snow policy was “ridiculous.”

“It’s going to take some kid or kids getting hurt before this goofball policy gets changed,” he said.

Michael Mulgrew, president of the United Federation of Teachers, said, “Having students, parents and staff traveling in these conditions was unwarranted.”

But Mayor Bill de Blasio said it was the right decision, although almost every other school district in the region was closed.

And comparing his job to Roker’s he said, “It’s a different thing to run a city than to give the weather on TV. So I am comfortable with our decision-making.”

The mayor said many families depend on the schools to supply a safe place and nutrition for their children, and many parents have to work despite the weather.

By noon, the storm had brought 9½ inches to Central Park and as much as 14 inches was reported on Long Island, said National Weather Service meteorologist Joe Picca. He said even more snow is forecast to hit the city Thursday night into Friday morning, after the precipitation switched to rain or ice for a while.

The expected daylong Nor’easter brought heavy snow to a region already heavily blanketed in white. The weather service warned of “near-blizzard conditions,” and Gov. Andrew Cuomo declared a state of emergency for the area including New York City, Long Island and the Hudson Valley. He urged residents to “stay off the roads and remain in their homes.”

There was no immediate word on school attendance figures, but New York City public schools’ preliminary attendance was just 47.1 percent on Jan. 22, another day that schools were open despite heavy snow. That was the lowest number in several years, according to the city’s Department of Education.

“It’s our job to make that decision and make that notice as quickly as we can,” the mayor said Thursday. “We could have had as little as 3 inches of snow on the ground or we could have had more.” He noted that road crews were at work early on the snow, and “we were convinced that kids could get to school this morning.”

“Based on the outcome, things happening now, we made the right decision,” he said.

He said schools have been closed only 11 times since 1978.

“It is a rarity and something we don’t do lightly,” the mayor said.

As Robert Johnson of suburban Pelham waited on a slippery platform for the 8:32 a.m. train to Grand Central, he said, “I heard a guy mention Puerto Rico — blue water, pina coladas. It sounded good to me.”

And a fellow commuter, Carlos Heredia of New Rochelle, was thinking of his native El Salvador.

Hundreds of flights were canceled to and from the region. Subways were on a normal schedule, but buses and some commuter rail lines operated at less than full service.