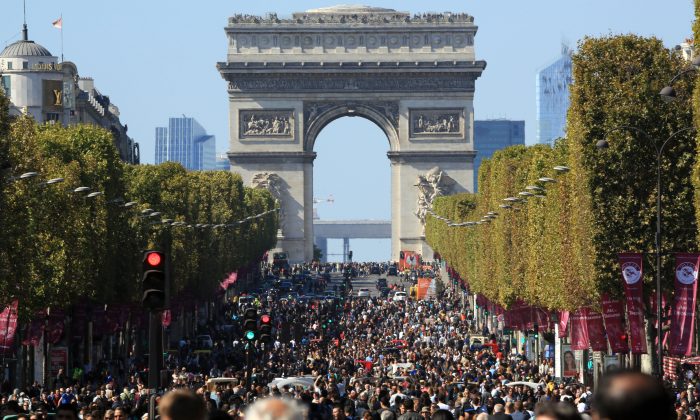 PARIS—Guidebooks rarely mention it, but Paris is one of the most polluted cities in the rich world. The Eiffel Tower is periodically shrouded in smog, and there’s one key culprit: France’s disproportionately heavy reliance on diesel fuel.

Critics are increasingly questioning the need for diesel vehicles, especially after last week’s discovery that Volkswagen tricked drivers worldwide into thinking their diesel engines were much cleaner than they really are.

Paris’s diesel-driven pollution problem is especially embarrassing for a city that’s trying to be environmentally exemplary as it prepares to host crucial U.N. talks in two months on reducing emissions. City authorities banned all traffic from central Paris on Sunday, Sept. 27, and are trying to gradually forbid diesel altogether, as they try to clean up the capital’s image.

But a nationwide crackdown on diesel remains taboo. And elsewhere in Europe—where the majority of cars run on diesel engines versus just one-seventh worldwide—few are raising the alarm.

Diesel engines emit about the same levels of carbon dioxide, the gas that causes global warming, as gasoline-fueled engines. The problem with diesel comes down to public health: Its engines emit several times more nitrogen oxides than do gasoline engines.

That pollution is linked to asthma, bronchitis, and increased risk of heart problems, and the World Health Organization’s France-based cancer agency says diesel fumes can cause lung cancer.

But European consumers prefer diesel cars because they’re cheaper to fuel and maintain. In France, that’s because of decades-old tax breaks and regulations that stretch from the factory floor to the gas pump, and that the government is reluctant to lift despite growing evidence of health risks. Most trucks, public buses, and municipal vehicles run on diesel, too.

Dismantling France’s deep and complex dependence on diesel could cost jobs and money in an economy with little maneuvering room.

Dismantling France’s deep and complex dependence on diesel could cost jobs and money in an economy with little maneuvering room. Governments left and right have legislated in favor of diesel since the 1960s, and industry officials fear ending the tax breaks and subsidies would drive consumers away from French cars at a time when the country is struggling to stay globally competitive.

“It makes no sense to abandon diesel,” said Julie Hamez of French consumer group 40 Million Drivers. “We need to concentrate on what can be done with better technology” to reduce its damage to health and the environment. The European Automobile Manufacturers Association is pushing such technology, arguing that modern diesel cars are as clean, or cleaner, than gasoline counterparts.

But the Volkswagen scandal has raised new questions about carmakers’ efforts to make less-pollutant engines. Other carmakers have faced similar accusations—including France’s own Renault, among seven companies fined by U.S. environmental authorities in 1998 for cheating on emissions tests.

“We knew that air pollution has a very large cost for global public health, several hundred billion (dollars); we know that this provokes several hundred thousand deaths,” he said. “There can be a very large economic cost when big companies are having fun by rigging the figures.”

France woke up to its diesel problem after Paris was choked with rough pollution spells over the past two years, prompting the city government to briefly restrict car use. At one point, Paris registered higher levels of nitrogen oxides than smoggy Beijing. Paris and its suburbs have few factories left—meaning the main source of that pollution was its cars, according to the Airparif monitoring agency.

French diesel use has fallen slightly in recent years, but most cars still use diesel, according to a French Senate report. An environment ranking by nonprofit group Soot-Free Cities lists Paris last among 23 European cities.

Mayor Anne Hidalgo wants to “eradicate diesel” by 2020, and is already taking steps in that direction. Next year all big trucks and buses made before 2001 and all cars made before 1997 will be banned from the city.

But she’s saddled with nearly 300 diesel buses ordered by her predecessor that are just entering service—and will be driving on Paris roads until 2030.

And fellow Socialists in the national government do not share her antipathy toward diesel, in part because of concerns that phasing it out would hit the poor hardest.

“When we encouraged diesel for years, when you have millions of families driving on diesel, millions of workers who go to work in their diesel cars, it’s not from one day to the next that you can punish them because they made these choices, and they don’t have money to replace their cars,” Environment Minister Royal said recently.

She speaks of a possible “adjustment” to the tax breaks for diesel, but so far her plans for reducing reliance on diesel remain voluntary and up to mayors to pursue.

“Most people see their city through new eyes,” Hidalgo, the Paris mayor, said of the no-car day that she plans to hold again next year. “Yes, we can function in a way other than cars 24 hours on 24 … We have to reconquer spaces for pedestrians.”