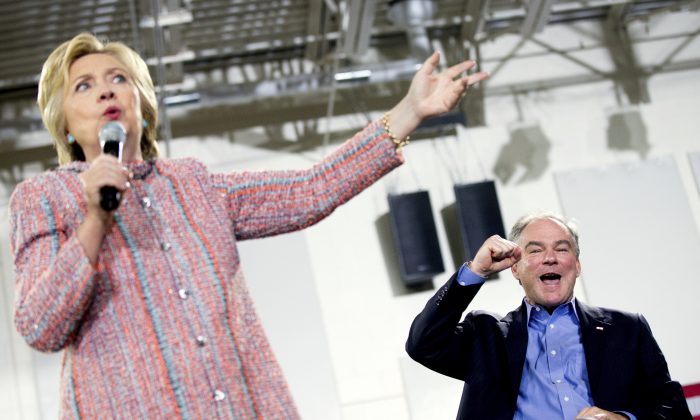 ANNADALE, Va.—Hillary Clinton campaigned alongside Virginia Sen. Tim Kaine on Thursday afternoon, making a high-profile appearance with one of the leading contenders for a spot alongside her on the presidential ticket.

Kaine, a popular lawmaker from an important general election battleground state, is considered to be a safe pick, one that could help Clinton woo moderates turned off by Donald Trump’s divisive rhetoric.

An early Clinton backer, Kaine tested out attack lines against Trump before several hundred gathered at a community college auditorium, assailing the GOP nominee as unqualified, untested and untrustworthy. Fluent in Spanish, he showed off his language skills, laughed at Clinton’s jokes and nodded energetically at her applause lines.

The appearance comes as Clinton moves into the final stages of picking her vice president, with an announcement expected as soon as next week. The shortlist includes Massachusetts Sen. Elizabeth Warren, a favorite of progressives who has emerged as a blistering critic of presumptive Republican nominee Donald Trump; Housing and Urban Development Secretary Julian Castro of Texas, a rising star in the Democratic Party; and Kaine.

Clinton offered few hints into her thinking, offering praise for Kaine that seemed tepid compared to the stream of compliments she showered on Warren at an event in Ohio last month.

“Everything Tim said is absolutely on the mark,” said Clinton. We are stronger together when we set goals for America.”

In private lunchtime meeting on Capitol Hill, Clinton assured Senate Democrats that she will pick a “very qualified” vice president after being asked who she was planning to choose. The question prompted a roar of laughter from the audience of Democratic senators.

Earlier on Thursday, Clinton promised Latino activists gathered in Washington for the annual convention of the League of United Latin American Citizens that she would make action on immigration legislation a top priority of her administration.

She called on Latino voters to help stop what she called GOP rival Donald Trump’s efforts to “fan the flames of racial division.”

“Donald Trump is running the most divisive campaign our lifetime. His message is that you should be afraid,” she told a gathering of Latino activists on Thursday. “We have got to say with one voice that Latinos are vital part of the American community.”

A deadlocked Supreme Court decision last month effectively killed Obama’s immigration plan to help some of the 11 million immigrants living in the U.S. illegally. Clinton vowed to restore and expand the program which would have protected the parents of children who are in the country legally and expand benefits to people who were brought to the U.S. as children.

Clinton promised to create a clearer immigration system where immigrants with “sympathetic cases” or a history of community service can be eligible for special status. She also vowed to eliminate family detention centers, which hold undocumented immigrant families, including children and babies, for weeks or even months in what advocates call prison-like conditions while they wait for legal processing.

Her campaign sees Latino voters, one of the country’s fastest growing demographic groups, as a key piece of their electoral coalition not only for 2016 but the future of the Democratic Party.

“I’m going to work my heart out but I need your help,” she said. “This is your election.”

Trump’s promises to build a wall along the Southern border, create a special deportation force to catch undocumented immigrants and references to Mexican immigrants as criminals and rapists have alienated many Latino voters.

“They will nominate someone who thinks Latino outreach is tweeting a picture of a taco bowl,” said Clinton.

In recent weeks, Clinton has highlighted those proposals to try to show Trump as blocking progress by sewing national discord and chaos.

An ad released by her campaign in battleground states on Thursday attempted to reinforce that message, featuring clips of young children watching Trump make some of his more controversial remarks about women and minorities.

“Our children are watching,” the ad says. “What example will we set for them?”