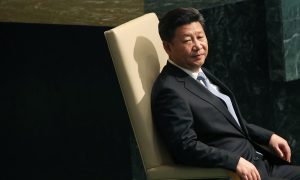 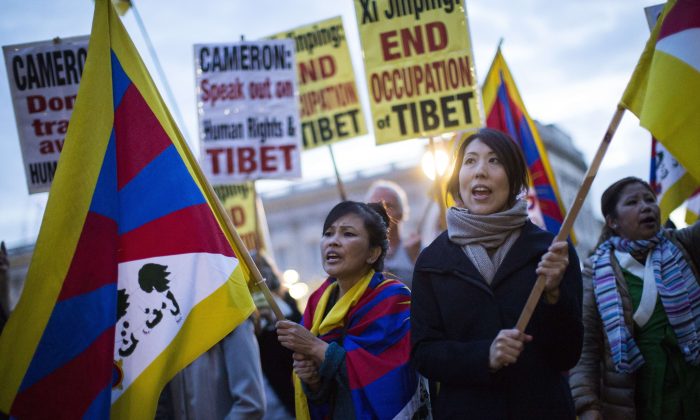 Protesters wave Tibet flags and chant slogans outside Buckingham Palace on October 20th, 2015, where the Chinese president was being hosted by the Queen on the first official day of a state visit (JACK TAYLOR/AFP/Getty Images)
China

On the first morning of Chinese president Xi Jinping’s visit to the UK, London was prepared for the ceremonial pomp that the British do to perfection. The Mall was lined with Union and Chinese flags, and thousands of onlookers, most of them Chinese. But half way along, another great British tradition was being upheld: the right to peaceful protest.

Here were people from Amnesty International, Falun Gong, and Free Tibet with their own banners and messages for president Xi, the UK government and the general public. They want human rights abuses in China on the agenda, rather than being brushed under the carpet.

Despite being vastly overwhelmed by pro-Chinese supporters with their red banners stretching all the way along the Mall, the protesters did not go unnoticed. “We wanted to have a small dignified presence that gave us the opportunity to talk to the media and put pressure on David Cameron to raise human rights with Xi Jinping,” said Allan Hogarth, Amnesty International UK’s head of advocacy & programmes.

“Human rights must be raised in a powerful, principled way both publicly and privately, especially publicly. It’s no good just having backroom deals and chats among junior civil servants. It needs to be David Cameron talking to Xi Jinping on these issues,” he continued. “You can’t neglect human rights in the name of trade and commerce.”

Out on the Mall in much larger numbers were people from the spiritual practice Falun Gong protesting about 16 years of persecution in China and aiming to put pressure on president Xi to bring the former Chinese leader, Jiang Zemin, to justice for launching the persecution. Many sat in silent meditation, in contrast to the noisy pro-Chinese.

“Xi himself is not involved in the persecution, so we hope his wisdom will allow him to have a very clear idea about what is happening to Falun Gong practitioners,” said Gao Yudong, who has organised a 24-hour protest opposite the Chinese Embassy since 2002.

Next to Falun Gong were Tibetan protesters from Free Tibet and Tibet Society, a Tibet support group, holding placards and waving Tibetan flags, despite on occasion being intentionally swamped by Chinese flags. “This was a shame because we want everyone to have the right to express themselves,” said Paul Golding from Tibet Society.

Particularly, he wants everyone living under the Chinese regime to have these freedoms: “We want to see human rights for everybody, not just Tibetans, because in order for Tibetans to become free, all of China needs to be free.”

“We want to see human rights for everybody, not just Tibetans, because in order for Tibetans to become free, all of China needs to be free.”
— Paul Golding, Tibet Society

In the UK, in common with all of the protesters in the Mall, he wants to hear the prime minister, David Cameron, speak out for democracy and human rights. But he is concerned that the government is selling out to China now and is only concerned about trade. “We heard from a top Foreign Office official in recent weeks that human rights has become a lower priority and that’s evident in all the trade deals that are going on. I don’t think the British public will be happy about this.”

A day earlier, at an event called the Stateless Lunch held in the Houses of Parliament, the reality of what is happening in China was reiterated. “There has been an alarming deterioration in human rights conditions in China since Xi came to power three years ago,” said David Mepham, UK Director of Human Rights Watch. “So despite all the rhetoric about reform and the rule of law and early expectations that possibly something was going to change for the better, overall we have seen a deterioration.”

He went on to express his disappointment at the UK government’s stance on human rights in China and had scathing words about Chancellor George Osborne’s recent trip to China. “Just under a month ago, he went to Xinjiang [home of many ethnic minority groups, including the Uyghurs] and not a public word about human rights in the entire visit. Instead he talked about his role being to make people aware of what was happening in China and how exciting things were. I think if he were to talk to Chinese human rights activists, which he declines to do, and listen to them and hear their testimony about what is happening he would not use the word exciting. He might use the word despotic or repressive. Exciting is not a word that describes what is happening in China at the moment.”

Tash Despa, originally from Tibet and now a British citizen, would agree. He went back to China to secretly film what was happening in the country, putting himself and those he spoke to at risk. He found concrete blocks of flats where Tibetan nomads had been forcibly rehoused, destroying their centuries-old tradition of living on the high plateau. In these new towns, there were no schools, no hospitals and few jobs for young people. As a result, families were breaking down and many were turning to alcohol. Poverty was rife.

At a buddhist monastery, many monks were leaving because plain-clothed police and informers were watching them constantly, looking for signs of loyalty to the Dalai Lama. “I met monks who were unable to practice their religion properly because of endless demands that they should attend political re-education classes,” said Despa. “I am deeply afraid that our culture and religion will not survive the current level of repression.”