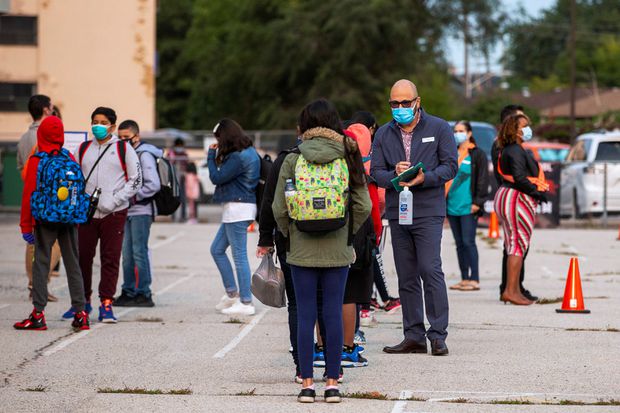 Students arrive at a school in Toronto on Sept. 15, 2020. (Reuters/Carlos Osorio)
Canada

Amid Shortage of Ontario School Board Trustee Candidates, Trustees and Educators Bemoan Climate of Fear, Censorship

Candidate shortages are an opportunity for change, one trustee says
By Peter Wilson

Nominations close on Aug. 19 for the Ontario school board trustee elections, but many school districts are finding themselves short of candidates.

Some trustees and early-childhood educators say a lack of respect for the position and a heated political climate within the province’s school boards are serving as deterrents both to existing trustees seeking re-election and to newcomers considering signing up to run.

The cases of teacher Carolyn Burjoski and trustee Mike Ramsey are two examples.

Burjoski had been an elementary school teacher for over 20 years when she was silenced and barred from speaking to her students in January after expressing concern to the board of trustees that the district’s school libraries contained sexually suggestive books that were potentially harmful for children.

Mike Ramsey, one of the trustees present when Burjoski made her comments during a meeting of the Waterloo Region District School Board (WRDSB) on Jan. 24, demanded afterwards that the board’s chairperson, Scott Piatkowski, apologize for his treatment of Burjoski. Piatkowski refused.

The board later voted on a motion to suspend Ramsey from attending meetings until Sept. 30 for breaching the trustee code of conduct—although it did not specify the nature of his breach. The motion passed 6–3.

Instances like this reach far beyond the WRDSB. A trustee on another Ontario school board (OSB), who wishes to remain anonymous to protect her position, says that in her 20 years on the board, she’s noticed a shift from traditional values to liberal ideologies within Ontario schools—and a decline in freedom of speech on the board.

“They’re always trying to cancel people who don’t agree with them,” she said in an interview. “It’s like people have lost their reason and they’re not looking at things like they should.”

As of late July, the Waterloo District, to name just one, had very few candidates running for vacant trustee positions. Two of the district’s regions had no candidates at all signed up to run for positions on both the Catholic and French-language boards, CBC reported.

‘We All Feel Alone’

Kathi Smith, one of Ramsey’s colleagues on the WRDSB, said she will not seek re-election this fall because she felt “under attack” for expressing her opinions about what’s best for students, CBC reported in July.

Smith isn’t the only one feeling this way. The OSB trustee said she feels “alone” in her efforts to maintain traditional values and policies within her district.

“It’s always a battle when you want to bring in traditional viewpoints,” she said.

The trustee spoke about her concern that many school boards—both public and Catholic—are abandoning their traditional foundations. but said trustees who are willing to speak up are scarce.

“There’s a few of us [like-minded trustees] across Ontario and we all feel alone,” she said.

A registered early-childhood educator (ECE) in the Huron-Superior District School Board, who also wished to remain anonymous, told The Epoch Times that her freedom of opinion has been directly challenged in the past by her district’s administration.

During a mandatory meeting for all district staff members in 2020, administration gave a presentation claiming that the concept of “white privilege” was inherently true. The ECE challenged the presentation with the principal of the school where the meeting took place, but was immediately shut down.

“He said that if I worked for the board, then I better make sure that I subscribed to all of their belief systems,” she said.

“I argued, saying I’m an independent thinker and that I’m not going to subscribe to something just because they tell me that I have to. That argument didn’t go any further than between him and I, but he basically, in a roundabout way, threatened my position.”

Teresa Pierre, president of the Ontario education activism group Parents As First Educators, told The Epoch Times that many people are afraid of running for the job of trustee because of the heated political climate in the province’s school boards.

The anonymous Huron-Superior ECE said she’s “not in the least surprised” that some school boards are struggling to find candidates.

“Anyone who tries to preserve tradition and keep to the truth is ousted and persecuted, and so I think people are afraid—they’re genuinely afraid but also completely exhausted,” she said.

But parents should see the current lack of trustee candidates in some districts as a “wake-up call” and an opportunity to take back charge of their children’s education, the ECE said.

“I think this is going to be a major wake-up call for parents. If they want any sort of say in the direction that their child’s education takes, then they better see this as a three-alarm fire. They have to get involved.”

For Pierre, the candidate shortages represent a now-or-never opportunity to change Ontario public education for the better.

“It’s time to man up,” she said. “Because if we don’t, it will only get worse and the repercussions are going to be visited on our children.”

The trustee elections will take place on Oct. 24.

Correction: Two quotes in this article by Teresa Pierre, president of Parents as First Educators, and the anonymous Huron-Superior ECE were misattributed. Additionally, Teresa Pierre is not an ECE with the Huron-Superior District School Board. The Epoch Times regrets the errors.