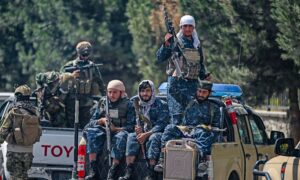 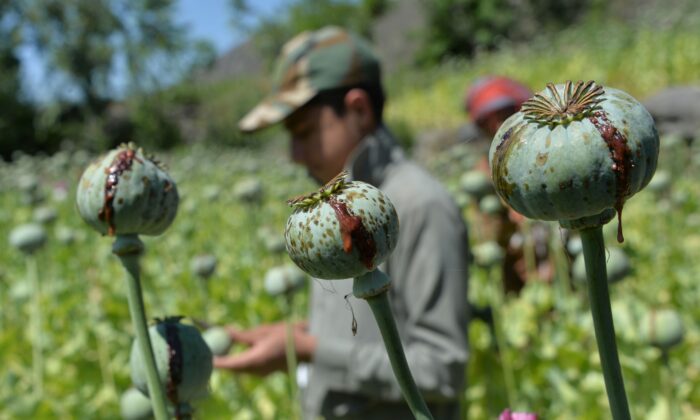 A farmer harvests opium sap from a poppy field in the Darra-i-Nur District of Nangarhar Province in Afghanistan, on May 10, 2020. (Noorullah Shirzada/AFP via Getty Images)
World

Amid Sanctions, Taliban Expected to Double Down on Drug Trafficking

As the world watches events in Afghanistan unfold, many have started to wonder what the Taliban rule means for the future of the country’s opium production.

Afghanistan is the world’s largest producer of the opium poppy, which is the raw material for heroin, one of the world’s deadliest drugs. The country accounted for nearly 83 percent of global opium production between 2015 and 2020, according to estimates of the U.N. Office on Drugs and Crime (UNODC). And it’s a key supplier for heroin markets across Europe and Asia.

The U.S. military presence failed to curtail opium production throughout the Afghan countryside. For two decades, opiate economy, which includes cultivation of the poppy, processing into heroin, and trafficking, has been a major source of cash for Afghanistan.

Despite its anti-heroin rhetoric, the Taliban has benefited greatly from this opium poppy economy and become a major player in the world’s drug trade.

In its first official press conference in Kabul, the Taliban pledged to end opium cultivation in Afghanistan, in an effort to gain acceptance from the international community.

“Today, when we entered Kabul, we saw a large number of our youth who was sitting under the bridges or next to the walls and they were using narcotics. This was so unfortunate,” Taliban spokesman Zabihullah Mujahid told reporters on Aug. 17.

“From now on, Afghanistan will be a narcotics-free country, but it needs international assistance,” he said, adding that foreign aid is needed to help Afghan farmers switch to alternative crops.

Afghanistan is noted for its high-quality fruits including pomegranates, grapes, and melons. Various international organizations in the past have helped Afghan families grow pomegranates, for example, as an important alternative to opium.

Despite its agriculture sector and rich mineral resources, the country has been critically dependent on foreign aid, which has dried up with the Taliban takeover.

International donors had been providing 75 percent of the Afghan government’s operating budget, Vanda Felbab-Brown, director of the Initiative on Nonstate Armed Actors at the Brookings Institution, wrote in a Chatham House report.

The Biden administration froze nearly $9 billion in Afghan government reserves that were held in the United States. The International Monetary Fund also blocked Afghanistan from receiving nearly $440 million in funds that were scheduled to be sent earlier. And the German government announced a suspension of $300 million in development aid budgeted for this year.

Hence, the country is expected to drift into a humanitarian and financial crisis soon, according to experts, which may lead the new regime to increase illicit activities, including drug trafficking.

“The immediate effects of the financial squeeze in place is that cash liquidity in Afghanistan may drop, which will drive up inflation—including food prices—while disadvantaging Afghanistan’s poorest and the hundreds of thousands of internally displaced people,” Felbab-Brown wrote.

As in the past, she noted, those who attempt to ban poppy cultivation in rural areas can “find themselves facing significant losses of political capital and violent opposition.”

Gretchen Peters, executive director at the Center on Illicit Networks and Transnational Organized Crime, believes the Taliban shouldn’t be trusted when it comes to its promises to eradicate the poppy trade.

“They pulled a maneuver like that back in the ’90s. They did actually succeed in banning farmers from growing poppy for a year,” she told NPR.

“But the secret was the Taliban were actually sitting on these huge, vast stores of opium. The price of opium went through the roof, and they sold it and made a lot more money than they had the year previous.”

According to Peters, the Taliban will now have full access to the capacities and institutions of state, including its banking system, airlines, and border crossings, which would make its drug trafficking a lot easier.

Recently, poppy cultivation has expanded in most regions of the country, soaring 37 percent in the past year alone, according to UNODC.