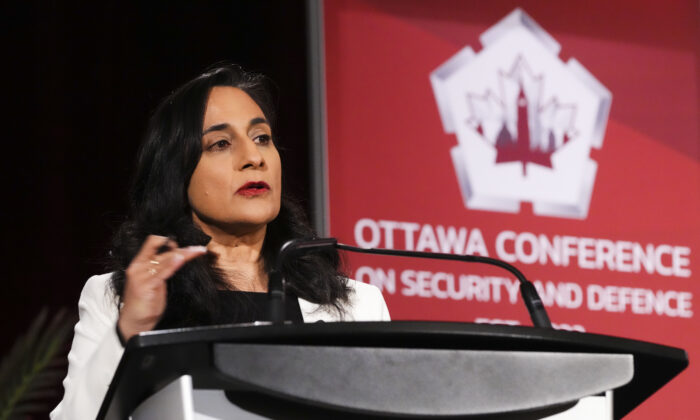 Minister of National Defence Anita Anand speaks at the Ottawa Conference on Security and Defence in Ottawa on March 11, 2022. (The Canadian Press/Sean Kilpatrick)
Canada

Europe is not the only fault line in global security amid Russia’s ongoing attacks against Ukraine, warns Defence Minister Anita Anand, while also emphasizing the need to address the threats from China’s “assertive activities.”

Speaking at the Ottawa Conference on Security and Defence on March 11, Anand said that the war in Ukraine presents consequences for the rules-based international order and that such a global security threat also impacts Canada and its North American allies and multilateral partnerships.

But she also noted the implications of Russia’s invasion of Ukraine for potential security threats in the Indo-Pacific region.

“What this crisis has demonstrated more than ever, is that Europe is not the only fault line in the global security environment at the current time,” Anand said.

“We have to be fully cognizant about China’s range of assertive activities in the Indo-Pacific region and around the world.”

She said China is seeking to “achieve its geopolitical goals through a mix of political, economic, and military means, including coercive behaviours in the East and South China Seas, … irresponsible and very concerning behaviours in cyberspace,” theft of intellectual property and sensitive technology, as well as hostage diplomacy tactics—as seen in the arbitrary detention of Michael Kovrig and Michael Spavor.

During a question-and-answer session, when asked how China’s increased powers factor into the recalibration of Canada’s defence, Anand pointed to the need to address the potential threats of a Russia-China alliance.

“We have to be clear-eyed about the fact that the [North Atlantic Treaty Organization] alliance and the countries that comprise it are being tested every day, not only in terms of the conflict in Ukraine, but also in terms of the threat that Russia and China present individually and potentially in collaboration with each other,” Anand said.

“Our Indo-Pacific Strategy that we are developing, … is incredibly important. Working with our allies—incredibly important,” she noted. “Because we can’t be on our back foot relating to responses to threats. We have to be prepared and assume that those threats exist based on the information we see. And as I outlined in my speech, there are numerous indications of the existing threats in regards to those two countries.”

Anand said that as Canada continues to develop the Indo-Pacific Strategy—as Prime Minister Justin Trudeau requested of her in her mandate letter—the Royal Canadian Navy is looking to increase its presence in the region with more port visits and more training and exercises with international partners and allies.

She added that a key part of the mandate letter relates to modernizing the North American Aerospace Defense Command (NORAD) to strengthen the continent’s defence, noting that the government’s recent budget invested over $252 million in initial funding to that effort to deter and defeat aerospace threats to the continent.

Canada has also made “landmark investments” in increasing Arctic defences, including through joint exercises, new patrol vessels, and enhanced intelligence and surveillance capabilities.

“Make no mistake, Canada will be at the table [with the United States] in the short term with a robust package to modernize NORAD, a system that has kept Canadians and Americans safe for over 60 years,” Anand said.