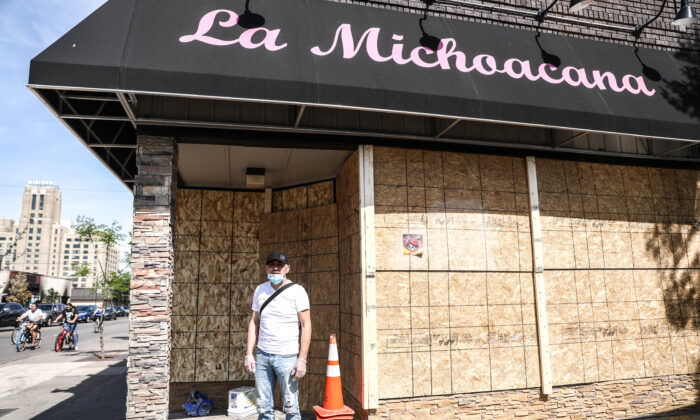 Ricardo Espin stands outside his ice cream shop after the fifth night of protests and violence following the death of George Floyd, in Minneapolis, Minn., on June 1, 2020. (Charlotte Cuthbertson/The Epoch Times)
US News

Amid Riots, Ice Cream Shop Owner Stands Outside, Pleads With Looters for 3 Nights

MINNEAPOLIS—Single-handedly, Ricardo Espin possibly saved a building containing four businesses from being smashed and burned in the heart of the Minneapolis riots.

Armed only with ample courage, Espin stood outside his ice cream shop on East Lake Street and Park Avenue for three nights, pleading with rioters to not damage his shop. Situated about a 15-minute walk from the Minneapolis Police Department’s 5th Precinct, Espin said he warded off several groups of 5 to 10 young vandals each night, usually around 2 a.m.

“I would just tell them, ‘Please, I’ll open up the door and give you what you want, but don’t break the windows.’

“I told every one of them: ‘I’m with you guys. I feel the pain. I know what it’s like. But this is not the way.’ And for the most part, they respected that, and they walked away.”

Daytime protests seeking justice for George Floyd—who was killed in police custody on May 25—have given way to violence at night in the area between the Minneapolis Police Department’s 3rd and 5th precincts.

Over the three nights from May 27 through May 29, Espin watched the Shell gas station diagonally across the street getting looted and razed. O’Reilly’s Auto Parts, directly across the road was burned to a crisp—a black, twisted shelf of sooty oil filters was the only recognizable item remaining. The building right next door to Espin’s was reduced to a smoldering skeleton of wood, steel, and rubble. It had housed four small businesses, including an African hair braiding business and an Italian restaurant.

“It was scary. And thank God all I had to do was tell them to stop and they stopped,” he said.

His shop, La Michoacana, was still broken into one night, and several large windows were broken, but he got off relatively unscathed. To add insult to injury, the power went out at about 2 a.m. on May 29 and wasn’t restored until later in the afternoon.

“We threw away a lot of stuff yesterday, because we use all fresh stuff,” Espin said. He said he gave a lot of ice cream away to the people who were helping clean up the streets.

“I was very sad yesterday taking out my equipment. It was a very sad feeling. You know, it almost puts tears in your eyes just to see that your whole life savings are right there, and they might disappear overnight. So it is a terrible feeling.

Espin, a Mexican immigrant, opened his shop in June 2018. Just two weeks ago, he spent $3,000 getting a walk-up window installed so he could still serve customers during the COVID-19 pandemic.

“It was hard enough to try to get through with COVID, and now go through this. These are difficult times. I mean, these are big losses,” he said.

On May 30, the building owners, James and Kristin Schoffman, covered up the windows and doors of all four shops with about 50 sheets of plywood, and they were back the next day to reinforce it.

“You’ve got to have it,” James said of the plywood. “[Looters] can still get in, but it buys some time. And then the insurance company, if you don’t do it, then they don’t think you tried in your best effort to secure your property. And then they could give you a hard time.”

The Schoffmans have owned the building for 25 years and spent about $150,000 18 months ago replacing the roof and upgrading the facade. They plan to leave the plywood in place for at least a day after the curfew, which Gov. Tim Walz set in place on May 29, is lifted.

“Yesterday was a very emotional day. Because I had accepted the reality that this would have been burned down by this morning,” Kristin said on May 31. “All four are minority-owned businesses.”

Next door to Espin is a phone company, a health care agency, and an Ecuadorian grocery store.

The owner of the phone store owns a second shop across the road that was ransacked and looted on May 29. All of the cellphones were taken, Kristin said. The health care agency was broken into and ransacked.

The Ecuadorian grocery store opened only a month ago.

“He signed the lease during COVID-19, because it was an essential service … to serve the Ecuadorian community with groceries. And then this happened,” Kristin said. “I was crying, because we want these people to succeed and do their best. It’s their dream, all their savings are put into it, and then this happens.”

Once the plywood comes down, the broken windows will need to be replaced, as well as the frames that the plywood had to be screwed into. The Schoffmans expect this may take a couple of months due to the likely demand in the area.

“Don’t get me wrong, there’s break-ins here. During the COVID-19, here’s how bad it was getting—before the chaos, the nonessential stores were getting broken into over the last 90 days.”

He said that over the last few nights, “a lot of it was lost about George [Floyd]—everybody forgot the purpose, and they just wanted free [stuff].”

The Schoffmans are praying that no more damage is done. They hear a lot of people saying, “Well, you’ve got insurance,” but it’s not that simple, James said. Some of the small businesses don’t have insurance, and even the ones that do will end up out of pocket to some degree. Many will have to make a decision on whether to rebuild or go out of business.

“People in Minnesota are amazing,” he said, “and what I’ve seen today and yesterday … these people, just as they are helping out right now to clean up, they will help us succeed. They will help us build the business back up.”