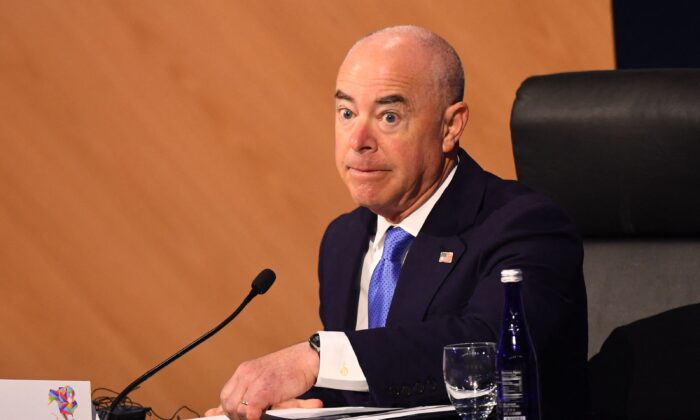 Amid Record Illegal Immigration, Mayorkas Insists Border Is ‘Secure.’ What Would Unsecured Look Like?

Millions of people have illegally crossed the southern border into the United States in the past few years, but the Biden administration says everything is fine, with “nothing to see here.”

With scant evidence or justification, he’s been repeating that “secure” line since assuming his post in February 2021.

“Look, the border is secure,” he said at the Aspen Security Forum in Colorado on July 19. “We are working to make the border more secure. That has been a historic challenge.”

That’s quite a remarkable statement from the homeland security secretary. Almost none of it is true, except for the “historic” part.

Of course, Mayorkas followed up his assurance that all is well with a predictable call for “comprehensive immigration reform” that Democrats have been selling for generations.

“I have said to a number of legislators who expressed to me that we need to address the challenge at the border before they pass legislation, and I take issue with the math of holding the solution hostage until the problem is resolved,” Mayorkas said.

“There is work to be done,” he said, before adding that “safe and secure are two different words.”

Since President Joe Biden took office just over 18 months ago, there has been a historic surge of illegal immigration across the southern border. It’s been decades since we’ve seen anything like it.

In fiscal 2021, U.S. Customs and Border Protection reported 1.7 million border encounters. It was the highest number ever recorded, but fiscal year 2022’s numbers are already higher. More than 2 million people have been encountered at the border through June. And the fiscal year doesn’t end until Sept. 30.

On top of those detained are the hundreds of thousands of “got-aways” who have evaded Border Patrol, according to a Fox News report. Senior Department of Homeland Security sources reportedly told Fox News that there have been nearly a million of these got-aways since the beginning of fiscal year 2021.

“There have been approximately 900,000 known got-aways since the beginning of [fiscal 2021], per the sources, which is equivalent to a population bigger than the city of San Francisco sneaking across the border without apprehension,” Fox News reported on July 25.

Not only are there millions of people coming across the border and breaking U.S. law in the process, but many of those crossing are drug smugglers, human traffickers, and even potential terrorists.

Does that sound like the border is secure? Hardly. In fact, some Border Patrol agents took issue with Mayorkas’s assessment that all is well at the border.

“Hundreds of thousands crossing every month is not the definition of ‘secure,’” a Border Patrol agent told Fox News Digital. “They are liars, and anyone who believes them are fools.”

Another agent, according to the Fox report, said that the administration is using “bogus” claims to help border-crossers dodge U.S. immigration laws.

“They’re using issues like poverty, crime, and climate change as reasons for [seeking] asylum, but those do not meet the legal standard of the law,” the agents said.

Another agent quoted in the report said that Biden and members of his administration haven’t upheld their oath of office.

“Mayorkas, [Border Patrol Chief Raul] Ortiz, and Biden are failures that do not have the support of agents and many command staff. They all have violated their oath of office to defend the laws and Constitution, and should be removed,” the source said, according to Fox News.

While the Border Patrol is detaining an incredible number of would-be illegal immigrants at the border, the administration isn’t prosecuting most of them.

A recent report by The Washington Free Beacon uncovered that the Biden administration “dramatically reduced migrant prosecutions by nearly 80 percent in the 2021 fiscal year.”

That was a huge shift from the final year of the Donald Trump administration, as the Free Beacon noted:

“Just 2,896 migrants apprehended on the southwest border were transferred into U.S. Marshals Service custody in the 2021 fiscal year, according to an internal Department of Homeland Security memo obtained by the Washington Free Beacon. In the 2020 fiscal year, 13,213 migrants were transferred to federal authorities for prosecution.”

The Free Beacon explained that this drop-off wasn’t just because of the Title 42 health policy that led to expedited deportations during a pandemic.

“Trump instituted Title 42 in March 2020 at the beginning of the COVID-19 pandemic and still prosecuted far more migrants than in Biden’s first year of his presidency,” The Washington Free Beacon reported. “Moreover, illegal border crossings in 2020 were much lower than in 2021, which saw the most migrant apprehensions in U.S. history.”

Of course, the Biden administration has been trying to discontinue Title 42, a policy change that would only make things worse. A federal judge blocked the policy change, but it appears the administration is still doing its best to make a farce of border enforcement in this country.

On border enforcement, the administration is essentially a rogue prosecutor. Law enforcement brings people in, the administration lets them go, and more people arrive. When you fail to prosecute crime, you get more crime and more criminals. Likewise, when you fail to maintain the law at the border, you get more people willing to break the law and cross the border.

So, the historic numbers we are now seeing are no mystery. The only question now is whether the administration is just incompetent or doing this on purpose—or is it both?

One way or another, it’s hard to see the Biden administration’s approach to border security as anything other than a national disaster. If this really is what the administration sees as borders that are “secure,” one shudders at the thought of what an “unsecure” border—by its definition—would look like.