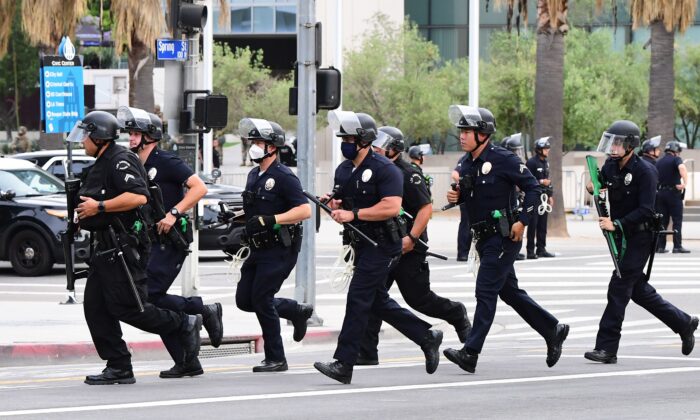 Officers from the Los Angeles Police Department run to formation during a march over the death of George Floyd, an unarmed black man, who died after a police officer kneeled on his neck for several minutes, in front of the Los Angeles City Hall in Los Angeles, Calif. on June 1, 2020. (Frederic J. Brown/AFP via Getty Images)
US News

In the wake of nationwide unrest sparked by the death of George Floyd in police custody, college students are calling on administrators to cut ties with local police, a demand that is largely left unfulfilled.

The call to end relationships with police has increased since the University of Minnesota agreed to break most of its partnerships with the Minneapolis Police Department. The university, in response to a student-led petition, said it would no longer contract the department for additional support at large events or specialized services.

“We have lost interest in discussion, community conversations,” read a statement posted on Twitter by Jael Kerandi, the university’s first African American student body president. “We no longer tolerate the ineffective, inconsistent ‘bias training’ that rarely serves as more than a fig leaf.”

Similar petitions are circulating at the University of Iowa and Ohio, Georgetown, and Temple Universities.

At New York University (NYU), multiple graduate student organizations issued a statement calling for the university to cut ties with and prevent the New York City Police Department (NYPD) from operating on the university’s campus. An online petition urging NYU to follow the lead of the University of Minnesota while accusing NYPD of “militarizing the peaceful protests” and “inciting violence” has gained over 12,000 signatures towards its 15,000 goal.

In a statement to student newspaper Washington Square News, NYU spokesman John Beckman said the university’s own security personnel are neither peace officers nor sworn officers, meaning that they are unarmed and lack law enforcement powers, such as making arrests. Therefore, NYU depends on the NYPD to respond to serious emergencies or crimes, indicating it is unlikely this relationship will be severed.

“So if someone has committed a crime against someone in our community—let’s say a robbery—we contact the NYPD to respond to and investigate the crime,” said Beckman. “Our officers are not armed; if there is a situation that involves an armed person—say, an active shooter—we would turn to the NYPD.”

A similar demand has been rejected at the University of Louisville, Kentucky. In a letter to the Black Student Union, university president Neeli Bendapudi said the university police department will not end its relationship with the Louisville Metro Police Department (LMPD).

“Your request for us to immediately terminate our relationship with LMPD would not make our campus or its constituents safer, and it would be an insufficient answer to a very complex problem,” Bendapudi wrote. “The harder work in a necessary partnership is to change, mold and evolve the partnership and the partner to best facilitate the university’s need without compromising our values.”