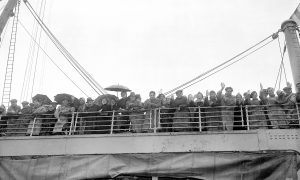 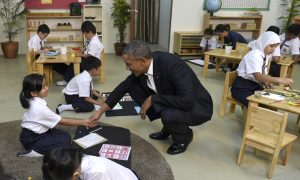 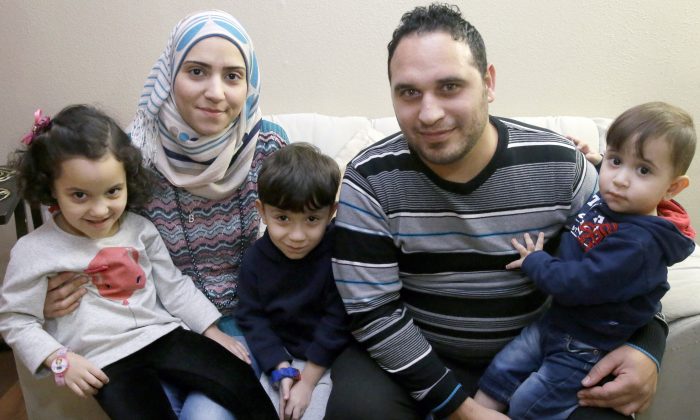 In this photo made Monday, Nov. 29, 2015, Syrian refugee Bashar al Jaddou, second from right, poses for a photo with his wife Maryam, second from left, and their children twins Maria, left, Hasan, center, and Mohammad word at their apartment in Dallas. (AP Photo/LM Otero)
US

Amid Protests, Some Syrian Refugees Find a Home in Texas

DALLAS—On a sofa in their small apartment, Bashar al Jaddou’s three children climb on his lap and speak in quick, soft Arabic as a photographer takes their picture. They smile and mug for the camera.

The 30-year-old al Jaddou decided to leave Syria in 2012 after his family’s home in Homs was bombed and there was nowhere safe left to live. Five months after arriving in Dallas, he works at a local Wal-Mart and takes weekly trips to parks with his wife and children.

“We moved here because of our kids,” he said through a translator. “We want a good future for them.”

In the last five years, Texas has taken in more refugees than any other state, including 243 Syrians, according to the U.S. State Department. Two more families from Syria were to arrive in Dallas in the next 10 days, even as Texas continued to oppose their arrival.

After the Nov. 13 Paris attacks, which were linked to the Islamic State group, Texas Gov. Greg Abbott and other Republican governors said they didn’t want new Syrian refugees. But Texas has fought the hardest of any state, threatening one refugee aid group, the International Rescue Committee, with loss of funding and suing that organization as well as the U.S. government on Wednesday.

The IRC said earlier this week that it was “important not to conflate terrorists with the Syrian refugees who are seeking sanctuary in the United States,” and vowed to continue its work.

Syrians, like all refugees, undergo rigorous screening, the federal government has said, and states lack the legal authority to block funding for such aid groups. In the weeks since the Paris attacks, about 200 Syrian refugees have settled in the U.S. — including in states whose governors resisted, according to the State Department.

Refugees in Texas have found a mixed reception — some residents have warmly welcomed them even as a series of incidents over the last year suggest growing anti-Muslim and anti-Syrian sentiment.

Two weeks ago, anti-Islam protesters carrying long guns marched outside a suburban Dallas mosque, and the protest organizer later posted the names and addresses of Muslims and “Muslim sympathizers” on Facebook. The organizer, David Wright, said in a Facebook interview that people who are afraid to oppose Islam publicly are part of a “fantasy that will come crashing down around them,” and that “the Syrian refugees are part of that strategy.”

The mosque protest in Irving followed the highly publicized case of a Muslim teenager, Ahmed Mohamed, who was arrested in the same town after bringing a homemade clock to school that a teacher feared was a bomb. He and his family moved out of Texas, and his attorneys have threatened to sue the city and school district.

And in May, a provocative Prophet Muhammad cartoon contest in another Dallas suburb ended in gunfire when two Muslims who drove from Phoenix tried to storm the building and were killed by police. Many Muslims consider any depiction of Muhammad, revered in Islam as God’s final prophet, to be offensive.

Texas agriculture commissioner Sid Miller posted two photos on his Facebook page, one of snakes, the other of apparent refugees. “Can you tell me which of these rattlers won’t bite you? Sure some of them won’t, but tell me which ones so we can bring them into the house,” he wrote.

Such rhetoric worries those who work with refugees and officials trying to help them.

“When you have this sort of political speech from the leaders in the state, and you have armed militias that stand outside mosques, it gives a powerful tool to those who wish to radicalize weak-minded, susceptible people,” said Dallas County Judge Clay Jenkins, a Democrat and the county’s top administrator.

He met recently with an 8-year-old Syrian girl and has said Dallas is open to taking in additional refugees.

The IRC planned to settle six Syrian refugees with relatives in Dallas later this week, and another family of four within the next 10 days. Volunteers have been collecting donated furniture and other supplies for an apartment for the first arrivals, said Hala Halabi, who works with the nonprofit Islamic Circle of North America.

Halabi said she had to assure one Syrian mother of five that she would not have to leave Texas.

“She was really, really scared,” Halabi said. “They felt like they’re going to deport them.”

Al Jaddou’s experience has been much different, however, and other Syrians agree.

Al Jaddou, who installed security cameras for a living in Syria, said he’s found the United States to be a friendly, safe country. He showed off photos he’s taken with people he met at parks and on the street. His children, two 4-year-old twins and a toddler, are “too young to feel what’s going on.”

Another Syrian refugee, 46-year-old Nabil Kalo, stocks shelves at Wal-Mart and sends checks back to his wife and four sons, who are living in Turkey waiting for a decision on their refugee applications.

The former electrical engineer shares an apartment in northeast Dallas with two other Syrians, one a former graduate student, the other a former pharmacist who has spoken to the United Nations about a mass killing he witnessed in his hometown outside Damascus.

They live in a lower-income complex of multinational residents, where many other recent arrivals live. Others are resettled in the nearby suburb of Richardson.

Kalo worries about growing apart from his sons, ages 4 to 14, and hopes his family can soon join him. But he’s thankful for the opportunity to support them from afar and said he has not encountered any problems with neighbors or people he meets.

“American people are really helpful people,” he said. “Really. I feel that, and I see that.”