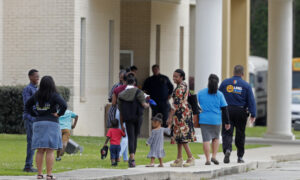 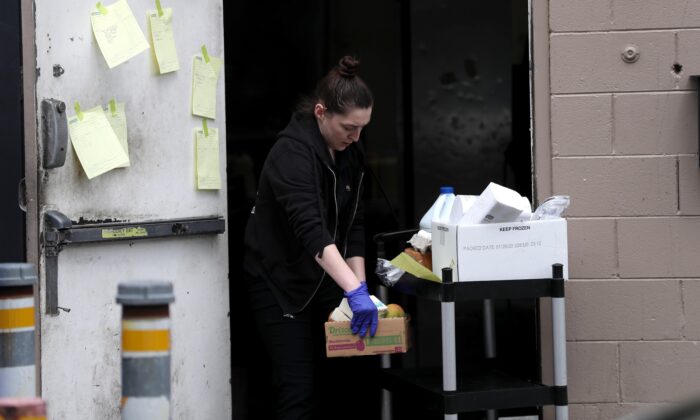 Maddy Dunn, a worker at Flights restaurant, fills orders during a drive thru no-touch groceries and to-go food service at the restaurant in Los Gatos, Calif., on March 23, 2020. (Justin Sullivan/Getty Images)
AMERICA

Amid Outbreak, Restaurants Switch to Grocery Sales to Help Themselves, Community, Industry

Restaurants across the nation are adapting to the shutdowns caused by the CCP virus pandemic by switching to grocery sales. The strategy is a win-win-win situation, as it helps businesses stay afloat, alleviates supply shortages at regular grocery stores, and diffuses the supply glut in the hospitality industry. Some restaurants are also combining grocery sales with deliveries.

Many U.S. states have banned eat-in restaurants in an effort to mitigate the epidemic. As massive layoffs sweep through the industry, many restaurateurs are looking to adapt. Meanwhile, some states have rolled back regulations to allow restaurants to sell their bulk supply of food directly to customers.

Sharp used to work for a food wholesaler and realized the hospitality shutdown meant that tons of food would now have no way to get to the customers.

“We’re trying to help our supply chain,” he said. “We’re buying product that at the moment is stuck in the supply chain because all of those distribution companies are selling to hotels, to restaurants, to cruise ships. Their market got immediately shut down about a week ago. So there’s an incredible backlog of product, dairy, meat, perishables, everything you can think of that you’ve ever bought in a restaurant is backed up with all of these suppliers.”

Sharp is trying to keep most of his 47 employees on payroll by reassigning them to the new task—break up the wholesale packages into smaller ones, listed on his website for regular shoppers to buy.

“People obviously aren’t coming out of their houses and coming to frequent restaurants, so we’re offering all our wholesale meats at that cost,” chef and co-owner Nicole Brisson told Eater Las Vegas. “They’ll pay what we pay for it. We’ve had a lot of great traction today. Families have come out of the woodwork and are really are excited about this because all the supermarkets are out of meat.”

The same idea, it seems, occurred to many entrepreneurs independently.

To Boomer Godsill, owner of Original Sunrise Cafe in Boise, Idaho, it came after he saw the empty shelves at his local grocery store.

He realized restaurants use different suppliers and so he called his distributor.

“Hey, do you have this and this and this? And if so, bring ’em in,” he later described the conversation to The Idaho Statesman.

He started to put the items on his Facebook page for sale.

“It took off where we couldn’t handle all the phone calls anymore just within one day,” he said.

He set up a website, SunriseGrocer.com, where people can order curbside pickup or deliveries of dozens of grocery items as well as vinyl gloves, paper towels, toilet paper, and more.

On March 29, Godsill put a notice on the store’s Facebook page, calling on local businesses to join in.

Similar stories are coming from Alabama, California, Georgia, and South Dakota. Among the states that have changed regulations to allow restaurants to sell groceries directly to customers are Michigan, Missouri, and Texas.