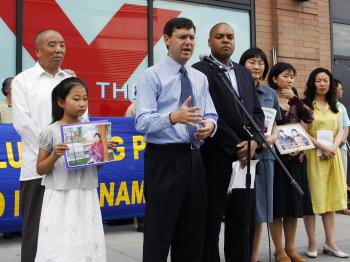 Councilmember David Yassky and Assemblymember Karim Camara join Falun Gong practitioners whose family members are missing in China in protesting the Chinese regime's support of the Sudan genocide and its persecution of Falun Gong. (Edward Dai The Epoch Times)
US


NEW YORK—Local politicians joined activists Monday in protesting the Chinese regime’s role in the Darfur genocide in Sudan and for its brutal 9-year-long persecution of Falun Gong.

Reverend Herbert Daughtry, called the “people’s pastor” by Camara, didn’t hold back on his harsh words for the Chinese regime.

“We charge China with not only human rights violations and not only the abduction and disappearance of loved ones who stand here, but also because China is the major supporter of the Sudan regime,” he said. “China, by supporting Sudan, is in collusion with criminals. We are here to [push for] the world to demand China recognize human rights values and also demand China to cease its support of this regime which is practicing genocide.”

The Darfur genocide has claimed the lives of 200,000-400,000 people and has displaced about two and a half million others, say various humanitarian sources.

“The United Nations called the situation in Darfur the worst humanitarian crisis in the world today,” continued Reverend Daughtry. “I’ve been there several times, I’ve actually seen the situation. Isn’t it obscene? It’s unspeakably insensitive that the world would be raving about someone who could run or swim the fastest, or someone who could throw a ball in a hoop. Who cares? That’s nonsense … What has the world come to?”

“What we’re talking about is mass denial of human and civil rights that we know to be taking place in the country of China at a time where you have the whole world’s eyes on China for what is supposed to be an emblem of good fellowship, good citizenship, of people joining together,” said Yassky.

“I really think it’s time for the whole world that is joining in the Olympics and watching to be asking the very difficult questions of when will China begin to respect human rights and civil rights within the country itself and in Darfur, where we know that the Chinese government and countries controlled by the Chinese government are some of the leading funders of the genocide in the Sudan.”

Yassky has been consistently calling on the City government to divest from companies that directly or indirectly fund the Sudan genocide.

“I have called for no New York pension fund dollars going into companies that are controlled by China and supporting genocide in Darfur—that’s what we can do at home,” he asserted.

From Sudan to China

The Chinese regime is not only guilty of the Sudan genocide, the protesters claimed. China is also guilty of genocide within its own borders with its brutal persecution on Falun Gong practitioners since 1999.

It is estimated that thousands have been killed, tortured, and jailed for their faith in the spiritual practice.

Zhang Shuangying, a New York City resident, has parents who were jailed by Chinese police.

“My elderly parents were kidnapped by police in China on July the 16th, simply because of their beliefs,” Zhang said. “They are Falun Gong practitioners. Falun Gong is a spiritual practice based on the principles of Truthfulness, Compassion, and Forbearance. My parents are in great danger.”

The circumstances of her parents’ abduction are dire, Zhang said.

“At 10:00 PM on July 16, more than 20 policemen broke into my parent’s apartment and ransacked our home. They cleaned out everything they could get and locked the door. They kidnapped my parents and did not tell my younger brother until the next day when my mother had a stroke that caused the left side of her body to be become severely paralyzed,” Zhang explained.

“The police put my parents into a detention center and threatened to sentence my father to a long-term labor camp or even prison because they found materials explaining the facts of Falun Gong and the persecution. The police demanded $1050.00 U.S. from my brother to release my mother.”

“I don’t know where they are now. They are not allowed to see any family members or friends. They are both 67 years old and have both suffered horrible persecution for several years. Now their situation is even more dangerous.”

Pang Jin, a graduate student at Missouri State University, also has parents that have been jailed for practicing Falun Gong. Pang wrote a statement for the rally regarding her parents’ abduction.

“On July 29, my parents were kidnapped by police when they were at a friend’s home in Weifang city in Shandong Province,” wrote Pang. “They are now illegally detained in Weifang City Detention Center.”

“My parents are kind-hearted people. They treat other very well and are respected by colleagues and friends. When friends learned about the news, they were shocked and angry. They couldn’t believe that my parents were the target of the Chinese Communist Party’s (CCP) persecution.”

35-year old Jia Yahun, a reporter and Falun Gong adherent in China, was arrested on April 25 at her cousin’s wedding. Police raided the wedding and led her away, said her father Jia Xuegang, who is a New Yorker.

Jia’s family has no way to know where she is, and has only heard recently through close friends that she was sentenced to a year of prison simply because she is a Falun Gong practitioner.

While Jia Yahun is languishing away in a Chinese jail, her daughter, only 9 years old, is here in New York without her mother.

The pain and suffering of not knowing the whereabouts of loved ones is something no one should be going through, the activists said.

“For these folks here suffering, not knowing the future about their family members, I just think that people of good conscience have got to speak up and demand that China be a responsible member of the world community,” said Yassky.