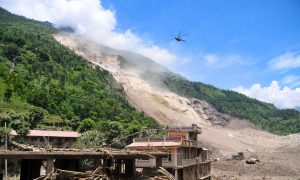 There were voices everywhere. Voices pleading for help and voices crying. Avi Shrestha, a 30-year-old resident in Kathmandu, lifted handfuls of debris as fast as he could from a building that collapsed near his house on April 25, when the initial 7.8 magnitude earthquake hit and shattered Nepal. But he could not move the chunks of concrete. He could not reach the voices.

The four who died, they were probably faces I saw everyday.
— Avi Shrestha, 30-year-old resident in Kathmandu

At night, people in Kathmandu continued to hear the voices of those who were buried alive, like apparitions that had yet to fully cross over to the afterlife.

The next day, government aid workers arrived with equipment to remove the wreckage that Shrestha had tried to clear through the day before. They found four dead bodies.

“There’s a feeling of helplessness all the time,” Shrestha said in a recent Facebook conversation with Epoch Times. “There’s just so much to do … haven’t seen anything [being] done. The four who died, they were probably faces I saw every day.”

The Nepali government’s official death count is in the thousands, and growing every day. But so far, they have mostly only counted in large cities. The New York Times reported that Max Wyss, a geophysicist who gives emergency aid agencies initial death estimates, estimated the total death toll is more likely to be around 57,700.

Yet nearly a week later, international aide workers are only beginning to reach remote villages due to crumbling infrastructure and the red tape of the Nepali government. Sources on the ground report that many international health-care professionals and emergency medical aid workers do not know where to go once they arrive in Nepal due to a slow government response.

For many Nepalis, hope awaits them on social media.

This makes it all the more important that Facebook and social network apps have mobilized young people in Nepal, and around the world, to connect and start grassroots initiatives to gather and distribute relief in areas that need it most, and in a way that bypasses government holdups.

For many Nepalis, hope awaits them on social media.

Amatya is co-chair of the youth assembly at the United Nations so she has a wide range of connections. Her post soon drew over two dozen comments from people who either wished to donate or work with her friend in Nepal.

The friend who was making the trip was Nehaal Mayur, a boyish-looking 27-year-old in Mumbai, India. He said in a phone interview that he volunteered to fly into Nepal with 20 water purifiers, medical supplies, and 15,000 packets of biscuits this Sunday.

Mayur has a master’s degree in social work, and is a youth representative of the Department of Public Information at the United Nations.

Although he is volunteering, he will still send back his observations to his associates at the U.N. He has a team who will continue to collect and send more resources after he arrives in Nepal.

Mayur is going to large cities as well as remote villages. He has rented a four-wheel drive.

But that will be very perilous to get to the villages by car. Most of the roads have either collapsed or are blocked by rubble.

Nepal has experienced more than 100 aftershocks since the initial earthquake; another aftershock could cause additional buildings and roads to collapse at any moment.

But Mayur is not deterred by that.

“If roads are not accessible we are going to use bicycles,” he said.

Mayur got in touch with 20 people across different areas in Nepal in a matter of days. For 15 of them, he met them through Facebook.

An important contact he met through Facebook was Pradeep Sapkota, a 25-year-old software engineer. Sapkota founded a local NGO called Change Nepalese Mission, which empowers women and youths by teaching them information technology.

Sapkota lives in Bharatpur, the fifth largest city in Nepal, located in the central-southern region of the country.

“Bharatpur city is safer,” Sapkota said in a telephone interview. “We do not need donations.”

The damage in his city was not as bad as others. People began sleeping inside their homes on Wednesday.

It was nice to sleep inside again, he said. But he could not rest well. His mind was on his friends who are stuck in a nearby village by the mountainside. The villages in his district were badly hit.

He said he was fortunate to have found support on social media. Now there is hope some supplies will come in a timely manner.

Facebook made it easier for Sapkota to meet Mayur. Amatya has a lengthy list of contacts and is busy with her work at the U.N. If she were to individually introduce her contacts to one another, it could have taken much longer.

“I got in touch with [Mayur]  three days ago, and now he is on his way. They move fast,” Sapkota said. “After he comes we both will go to affected areas in the village.”

Amatya was on her laptop at her apartment in New York when she received a text from a friend in Nepal at 2 a.m. The earthquake had just hit. She was one of the first to get firsthand information.

She received the text through Viber, a free app that allows free international calls and texts.

Amatya and her siblings, who are also living in the U.S., immediately started a fundraiser for Nepal on Indiegogo, a crowdsource website. Their campaign is called “Rebuilding Nepal-Immediate Relief Fund ’15.”

The fundraiser raised $18,802 in five days. “Ten dollars worth of food and water can sustain one family for a week,” she said.

They money will go to credible local groups who are willing to start relief efforts immediately.

International organizations such as the Red Cross, Oxfam, and the United Nations are certainly helping in a large way.

“We’re not giving funding to big organizations who already receive international support,” she said. “We’re giving it to the local organizations, the ones who are willing to go to the rural areas.”

Young people like Amatya are also connecting with doctors and sending them to local organizations who have the funds and are not waiting for government approval.

She is in touch with Ritesh Kumar, a medical doctor in Nepal. He has a team that will head to Nuwakot region, just Northwest of Kathmandu, to provide essential health services there. Another team will head toward Dhauladhar, a region up in the mountains, a little above Sindhupalchowk.

“On a lighter note a lot of youth have come forward, organizing dispatch centers, and coordinating it all through social media,” said Shrestha, a Kathmandu resident.

Shrestha knows of two camps in his area that are doing very well.

One is run by the Federation of Nepalese Chambers of Commerce and Industry. Another is made up of individual, young volunteers who meet by The Yellow House, a famed bed and breakfast in Kathmandu.

“People are posting what they are doing and what relief packages they have … all the posts have be shared multiple times so the right person sees it,” Shrestha said. “This simplifies our personal efforts in reaching out to the needed areas and helps cut down the duplication of relief effort.”

It would be a shame to duplicate efforts, for Shrestha spent around $3,000 out of pocket so far on rescue supplies such as food, tents, and medicine.

Kathmandu has run out of tarps, so he and his girlfriend are buying flex material and making tents out of those.

“The aid tents are on the way, but not sure when they will reach, or if enough of it will come,” he said.

But he is trying to remain positive.

Right before Shrestha’s interview with Epoch Times, he felt an aftershock. The earth rumbled for five seconds.

“Well we are quiet [sic] used to it by now,” he said. “It used to come 50 times a day during the first three days. It only happens three to four times a day now. Sometimes it goes unnoticed.”

“Kathmandu is not as bad as it looks in the pictures,” Shrestha said.

CORRECTION: An earlier version of the article misstated the occupation of Avi Shrestha, and his girlfriend Bina Ghale. The couple own a fashion label in Kathmandu. Epoch Times regrets the error.