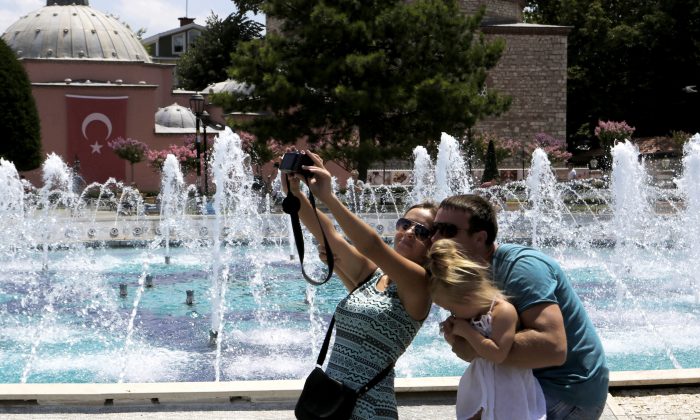 Tourists take a selfie at the Byzantine-era Hagia Sophia, in the historic Sultanahmet district of Istanbul on July 26, 2016. (AP Photo/Petros Karadjias)
Middle East

ISTANBUL—With summer drawing to a close, Turkey is counting the cost of a tough year that saw a string of terrorist bombings and the fallout from a diplomatic spat with Moscow that cut deep into the country’s crucial tourist trade.

And then right bang in the middle of summer, the economic backdrop got more precarious after an attempted military coup that saw more than 270 people killed, the imposition of a state of emergency and the subsequent arrest and dismissal of thousands of supposed sympathizers.

Turkey’s Deputy Prime Minister Mehmet Simsek conceded the failed coup on July 15 and its aftermath have “weakened” the economy even as he praised its resilience in the face of such adversity.

Tourism, a crucial foreign-currency earner for a country in constant need of foreign currency to plug a yawning current account deficit, has borne the brunt of the economic fallout.

That’s mainly due to a precipitous 89 percent drop in Russian tourist arrivals after a diplomatic fallout between the two countries brought on by Turkey’s downing of a Russian warplane last year. Russia was Turkey’s second-largest tourist market with 4.5 million people visiting places like Turkey’s tourism capital Antalya in 2014.

With many Russians holidaying elsewhere, Turkey stands to lose between $8 and $10 billion in tourism revenue by the end of the year, according to Cetin Gurcun, Secretary General Turkey’s travel agency association TURSAB. No amount of deals could fully plug that gap.

“If we consider the volume of the Russian market, it’s not easy to fill the void,” Gurcun told The Associated Press.

Turkey-Russia relations are now back on track, but Gurcun doesn’t expect the Russian market to rebound before next year.

It wasn’t just Russians who have stayed away from Turkey’s beaches and the cultural delights of places like Istanbul.

Thomas Cook, the British-based holiday company, said recently that demand for Turkish holidays was “significantly below last year’s level” and that its overall bookings for the summer 2016 season were down by 5 percent largely because of this particular “geopolitical disruption.”

Official Turkish figures for the whole of the summer tourist season have yet to be released. But it’s clear there’s been a hit. June and July alone saw tourism arrivals plunge an annual 40 and 36 percent, respectively.

Industry too. The most recent figures showed that industrial production in July fell by almost 5 percent year-on-year in July, the sharpest fall since the start of the current data series in 2005.

All in all, the Turkish economy has suffered a shock—or series of shocks—and growth forecasts have been revised down. Turkey is expected to post what—at first glance—looks like reasonable growth this year of a little more than 3 percent. But before the attempted coup, most independent economic forecasters had penciled in Turkish economic growth of around 4 percent this year.

That’s a big change, especially for a developing economy that’s been used to way-more over much of the past 25 years or so. Living standards could face a squeeze, further exacerbating the uncertainty many feel within the country.

Erhan Aslanoglu, professor of economics at Istanbul’s Piri Reis University, said Turkey’s economy is tough enough to weather the worst of the storm, but needs more than 4 percent growth to continue pushing down on unemployment.

“It’s better than many European countries, but not enough for Turkey,” he said.

Another concern is that foreign investors will look elsewhere if Turkey turns increasingly authoritarian Turkey. Foreign investors are badly needed for the financing of Turkey’s sizeable current account deficit, which stood at around 4.5 percent of the country’s annual GDP in 2015.

The great fear for many is that Turkey is moving toward a more authoritarian model of governance—a trend that could further dent any hopes that the country has of joining the European Union.

Since the coup was seen off, tens of thousands of civil servants and government bureaucrats have been dismissed while scores of businesses have been shut down over suspicion of being linked to Pennsylvania-based Islamic cleric Fethullah Gulen whom Turkey blames for the attempted coup, a charge Gulen rejects.