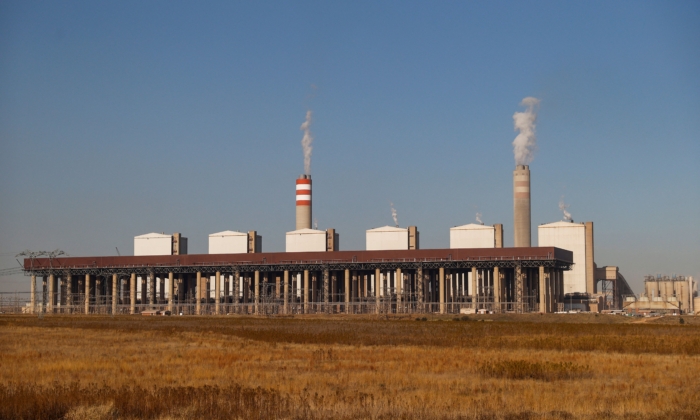 A general view of the Kusile Power Station, a coal-fired power plant located on the Hartbeesfontein Farm in eMalahleni on June 8, 2022. (Phill Magakoe/AFP via Getty Images)
Africa

South Africa has endured frequent, widespread blackouts since 2008, when most of its old coal-driven power stations began failing. The crisis has been worsened by corruption and mismanagement at the state electricity company, Eskom, which has warned the power grid is collapsing.

Eskom, one of its major cash cows, was a prime target. Thousands of white managers, technicians, and engineers lost their jobs. Many left for top posts in the field of electricity generation internationally, helping countries across Europe, the Middle East, and southeast Asia to overcome energy crises.

“The utility’s now recruiting skilled personnel, including former senior plant managers and engineers from the private sector. Some of these had left Eskom and had gone to various locales in the world. Eskom’s now seeking to bring them back,” President Cyril Ramaphosa said in a televised address to the nation on July 25.

“I’ve also been heartened by approaches we’ve received from former plant managers who’d left Eskom and have come forward voluntarily to say that they want to lend a hand. These skilled personnel will help to ensure that world-class operating and maintenance procedures are reinstated.”

Ted Blom, a senior mining, energy, and utilities strategist with a master’s degree from Harvard Business School, was dismissed as a consultant to the corporation 22 years ago.

“At the time, we warned the government that affirmative action changes were being made at Eskom too fast and that it would lead to catastrophe. You can’t suddenly lose hundreds of highly-skilled experts, no matter the color of their skin, and then fail to replace that with a skillset of equal or better quality; that’s looking for trouble,” Blom told Epoch Times.

According to its website, Eskom currently employs almost 45,000 people, mostly at its 15 power plants.

Dirk Hermann, the leader of the Solidarity trade union, told Epoch Times: “In discussing the present skills vacuum at Eskom you have to consider the historic context. Eskom, encouraged by the ANC, was reckless in the implementation of a transformation program. It offered billions of rands in packages to workers who should never have been allowed to leave.”

Eskom’s current chief operating officer, Jan Oberholzer, told Epoch Times the loss of skilled workers is an “ongoing, major driver” of the utility’s failure to keep the lights on, which costs the economy billions of dollars a week.

The power outages are also blamed for the loss of life. There have been numerous reports over the years of people being killed in collisions because traffic lights fail. Criminals take advantage of dysfunctional security systems to attack homes and businesses. Patients die in medical facilities when life support equipment fails or is damaged by surges in electrical current.

In 2018, Solidarity provided the government with a list of experts, mostly white, willing to return to Eskom to help it end the blackouts.

“The average experience on that list was almost 17 years in power generation. It was more than 1,000 names. It wasn’t just ex-Eskom employees. There were mechanical engineers, for example, who’ve been designing power plants in Vietnam and the Philippines, telling us they wanted to plough their skills back into their home country,” Solidarity’s research head, Connie Mulder, told Epoch Times. “There were people working in the electricity generation sector across North America, Australia, and New Zealand.”

Last week, as South Africa suffered some of the worst outages in years, the union finally heard back from the government. The reply, said Mulder, came from Public Enterprises Minister, Pravin Gordhan.

“He asked us to send the list again, saying government desperately needs more skills in the generation space. We’re now working on an updated list, and we’re making sure who of the original people we put forward are still willing and able to return to help fix the country’s energy crisis. Then we’ll shorten the list to 100 topnotch experts.”

Mulder said the list currently contains the names and qualifications of individuals with “vast experience in the electrical, mechanical, nuclear, and systems maintenance fields, plus senior artisans and plant operators for coal and nuclear power stations.”

But the looming return of white experts to Eskom has angered trade unions with majority black membership at the power company.

Irvin Jim, leader of the National Union of Metalworkers of South Africa, told Epoch Times: “There’s no place in modern society for Solidarity’s inference that old, white males come and save the day at Eskom.”

He said the utility’s black technicians are “more than capable of fixing power stations, if they get better and more resources.”

Jim added that his union “rejects Solidarity’s blatant attempt to reverse black economic empowerment. There are many black engineers who are even better qualified than white engineers.”

He described Ramaphosa’s announcement as a “slap in the face” of black South Africans and a “stunning insult to the intelligence and skill of Eskom’s many excellent black technical staff.”

Mulder said Solidarity’s offer isn’t about white engineers being better than black engineers, and that anyone able to help Eskom–no matter their race–should be allowed to do so.

Jim hit back: “Eskom is managed by two white men, yet it is failing in its mission. They have plunged the country into rolling blackouts for the past two years.”

Eskom CEO Andre de Ruyter and Oberholzer deny they’re racist. They blame the electricity breakdowns on the neglect of essential maintenance and upgrades at power plants stretching back to the mid-1990s, but especially during the allegedly corrupt reign of former president Jacob Zuma between 2009 and 2018.

In April, a commission of inquiry found that Zuma appointed cronies to loot Eskom, and that the equivalent of almost a billion dollars was plundered from the company, mostly during the final four years of Zuma’s tenure.

In 2010, Brian Dames was appointed chief executive at Eskom, becoming the first black South African to lead the corporation. He held the post until 2014, when he resigned in protest at the ANC’s “mishandling” of Eskom’s mounting problems.

Dames, a nuclear physicist, now serves as CEO of African Rainbow Energy & Power and is president of the World Bank’s executive council driving its “Sustainable Energy for All” initiative.

He told The Epoch Times South Africa’s present power generation crisis is a “state of emergency” and that the country can’t afford to “engage in race debates” while it suffers “electricity meltdown.”

“Whoever’s able to help Eskom must help. We can’t afford the luxury anymore of saying, ‘So-and-so should not be allowed in the door to help because his or her skin color is wrong.’ This is not the time for politics. Fix the chaos, and then you can play politics,” said Dames. “I am very pleased by the president’s announcement.”

Mulder said whatever the “color and nature” of new skills employed to end the outages, they’ll offer only “temporary relief” as Eskom’s coal-driven model is “obsolete.”

“We’re calling for an explosion of small-scale generation; the answer to South Africa’s energy needs lies on millions of rooftops. It doesn’t lie in a few megaprojects. We need to get everyone who wants to generate power to push electricity into the grid so we can get out of this hole we’ve been digging.”

Dames agreed, also calling on the government to expand the grid.

“We can do this if we build an integrated network by connecting the whole region of Southern Africa by means of shared gas, hydroelectric, wind and solar initiatives. If that happens, the whole region’s energy needs will be met.”

For now, said Dames, Eskom has to optimize the performance of its power stations and decommission those performing poorly and proving difficult and costly to maintain.

Like many experts, he said the sooner South Africa ends its reliance on burning coal for electricity the better. But that isn’t going down well with certain leading ANC officials whose stakes in coal mines are a matter of public record.