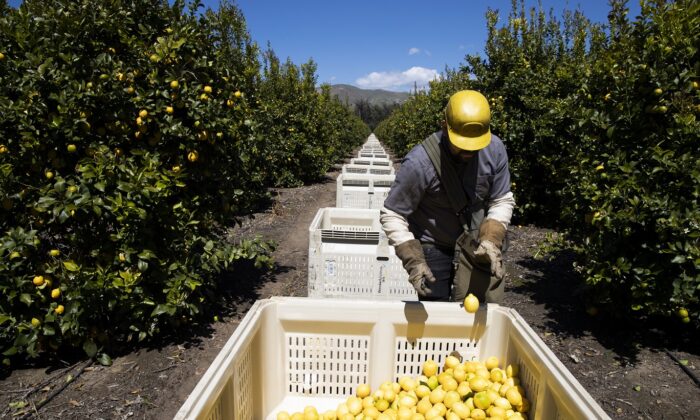 There’s no justification for the present high levels of foreign workers in the United States at a time of pandemic-related high unemployment, according to a panel discussion hosted by the nonpartisan Center for Immigration Studies on April 21.

The online discussion came after President Donald Trump announced he would sign an executive order temporarily halting immigration to the United States.

Trump announced the move on April 20 after a tumultuous day in the markets. The price of futures contracts for oil dropped below zero for the first time ever because of severely reduced demand caused by containment measures aimed at the CCP virus, which causes the disease COVID-19. The market development has spooked investors and shocked policymakers as they ponder its future ramifications.

“In light of the attack from the Invisible Enemy, as well as the need to protect the jobs of our GREAT American Citizens, I will be signing an Executive Order to temporarily suspend immigration into the United States!” the president wrote on Twitter.

“President Trump is committed to protecting the health and economic well-being of American citizens as we face unprecedented times. As President Trump has said, ‘Decades of record immigration have produced lower wages and higher unemployment for our citizens, especially for African-American and Latino workers.’ At a time when Americans are looking to get back to work, action is necessary.”

According to the Center for Immigration Studies (CIS), both white-collar and blue-collar workers are being hurt in the current economic crisis as U.S. visa programs continue to import historic numbers of workers.

The total number of temporary workers who participate in guest worker programs at any given time isn’t known, as the federal data systems that process visas aren’t linked together.

Jessica Vaughan, director of policy studies at CIS, said, “The stock population of temporary or non-green card workers that is now present in our labor market I estimate to be about 4 million at this moment, some of whom have temporary visas, but others have these work permits that are issued in one- or two-year increments at a time.”

Vaughan said during the panel discussion that about 1.8 million new work permits and renewals of work permits occur each year in a variety of categories, most of which are under control of the executive branch.

“If they were curbed in number, this would instantaneously almost create jobs for Americans and for other legal workers who are here.”

The president can take immediate action and “some of Congress can play a role as well, but in a crisis like this there are definitely things that the president can do to make sure that we don’t have workers from abroad taking jobs that Americans could and would like to do,” she said.

The employer lobby has managed to convince people that there is a need to bring in foreign workers, Vaughan explained.

“These visas exist because employers have succeeded in creating this narrative that there is a shortage of highly-skilled American workers and that they need to reach abroad to fill vital jobs for our economy. … Many of these jobs simply aren’t available to Americans to apply for.

“They’re filled by labor brokers who recruit from abroad and sometimes even have been found to discriminate against American workers in advertising for workers and in placing workers either with big U.S. companies or even sometimes” with states, localities, or the federal government.

CIS fellow David North said the current economy isn’t causing foreign workers who lose their jobs to leave the United States but “it may cause some people not to come.”

“We don’t want temporary workers to have more time to find another job. This is the time [to say] ‘Sorry, it didn’t last three years, it’s time to go home.’”

Mark Krikorian, executive director of CIS, said the H2B visa program, which is popular among employers, makes no sense.

“It brings in 66,000 of these seasonal workers every year. Landscapers are the biggest category … forestry workers, meat processing workers, amusement park workers, believe it or not carnies, we import carnies because we apparently don’t have enough. … and the employer line to lobbyists is that these are jobs Americans won’t do, which is clearly nonsense, even among landscapers two-thirds of people who do landscaping are native-born Americans nationwide.”

“To claim that there’s a labor shortage in these occupations is also ridiculous. In a real labor shortage wages go up. Employers have to bid for workers. They have to make the jobs more attractive,” he said.