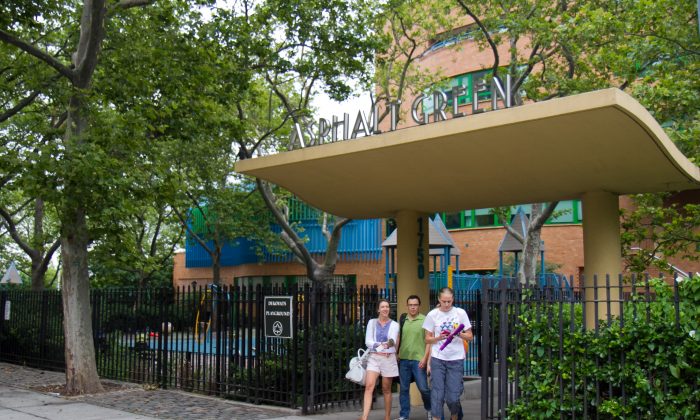 People walk out of the Asphalt Green Community Center on Manhattan’s Upper East Side, where the city’s proposed marine transfer station would be built—directly behind the center. (Benjamin Chasteen/The Epoch Times)
New York

NEW YORK—As politicians continue to bicker back and forth on the fairness of the location of the East 91st Street marine transfer station, one reality remains certain—demolition has begun.

The plans for the 10-story station have been highly contested with multiple law suits filed on behalf of residents who believe the influx of trash trucks will be a detriment to their health and quality of life.

Asphalt Green, a 5.5 acre athletic complex with fields where children play soccer and football, has been prominent in the fight against the trash facility. They are currently in court with the city, however, the project continues.

Asphalt Green claims Skanska, who was contracted for the demolition, agreed to use barges instead of trucks to haul away debris from the site. Asphalt Green claims on May 23 Skanska broke that agreement when two large uncovered tractor trailer trucks filled with demolition debris drove down the ramp past their facility.

“With no communication from the City Department of Design and Construction (DDC) or Skanska, we were horrified to see this activity occurring right as groups of children were crossing the ramp to get to Asphalt Green,” said Asphalt Green Executive Director Carol Tweedy in a statement.

A spokesman for DDC said communication between Asphalt Green and the city has been cut off due to the lawsuit, but lawyers representing the two sides do communicate.

“On one day last month, no barges were available, so the contractor used a truck to haul debris,” said DDC spokesman Joe Soldevere in an emailed statement. “While the contractor is not prohibited from hauling debris by truck, in response to community concerns, DDC instructed the contractor to use barges only from now on.”

The project has been a hot button issue in this year’s mayoral election, with City Council Speaker Christine Quinn, and former Comptroller Bill Thompson trading barbs over the project.

Despite harsh criticism, Quinn has stood by her decision to back the project, arguing poorer neighborhoods are often the site for these facilities.

“We have, for far too long in the City of New York, put all the municipal refuses into low-income neighborhoods of color,” Quinn spokesperson Mike Morey said in a statement. “And what has that meant? It has meant truck after truck after truck rolling through places like Harlem, Williamsburg, and the South Bronx causing asthma rates in those communities to skyrocket.”

Quinn was accused by Thompson of calling those opposed to the Upper East Side location environmental racists, however her campaign refuted the claim.

“Bill Thompson believes it’s a terrible idea to dump garbage and exhaust fumes on top of a playground,” Thompson said in a statement. “No site in the city’s proposed waste plan exposes more children or more minorities to environmental hazards than the 91st Street location.”