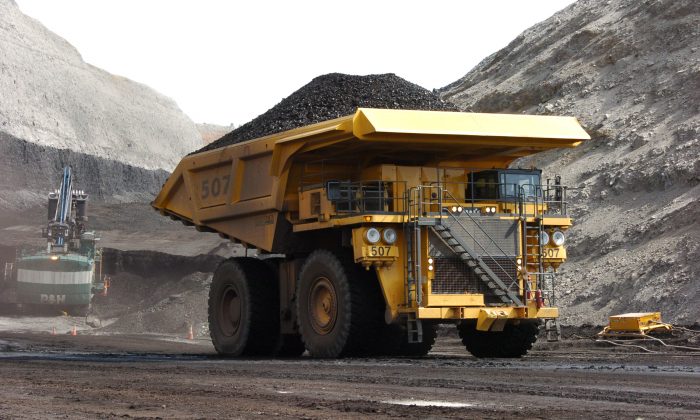 Amid Coal Market Struggles, Less Fuel Worth Mining in US

BILLINGS, Mont.—Vast coal seams dozens of feet thick that lie beneath the rolling hills of the Northern Plains once appeared almost limitless, fueling boasts that domestic reserves were sufficient to power the U.S. for centuries.

But an exhaustive government analysis says that at current prices and mining rates the country’s largest coal reserves, located along the Montana-Wyoming border, will be tapped out in just a few decades.

The finding by the U.S. Geological Survey (USGS) upends conventional wisdom on the lifespan for the nation’s top coal-producing region, the Powder River Basin. It also reflects the changing economic realities for companies seeking to profit off extracting the fuel as mining costs rise, coal prices fall and political pressure grows over coal’s contribution to climate change.

“You’re looking at a forty-year life span, maximum, for Powder River coal,” said USGS geologist Jon Haacke, one of the authors of the analysis.

Claims that the U.S. had reserves sufficient to last as long as 250 years came from greatly inflated estimates of how much coal could be mined, Haacke added. They were based on data put out by the U.S. Energy Department last updated comprehensively in the 1990s.

For decades, the agency has made little distinction between coal reserves that reasonably could be mined and those that could not.

The perception of coal’s abundance began to shift in 2008, when the USGS team released initial data that called into question the longevity of U.S. supplies.

Yet assertions that America was the “Saudi Arabia of coal” persisted, including in 2010 by President Barack Obama and continuing in recent months by industry supporters. The Department of Energy states on its website that based on current mining rates, “estimated recoverable coal reserves would last about 261 years.”

Belying that outlook is both the USGS assessment and the industry’s recent changes in fortune. Mine production has dropped after many electric utilities switched from coal to cheaper natural gas. Two of the three biggest domestic coal companies, Arch Coal and Alpha Natural Resources, declared bankruptcy in the past 18 months.

Leslie Glustrom, an environmental activist from Boulder, Colorado, who has urged the Energy Department to change how it tallies up the nation’s untapped resources, said she believes the end for the Powder River Basin is coming even more rapidly than the USGS study suggests. And she said it has little to do with a “war on coal” that Republicans frequently accuse the Obama administration of waging.

“This is not a political problem. It’s a geologic problem,” Glustrom said.

In Wyoming, which produces about 40 percent of the nation’s coal, State Lands Director Bridget Hill said she had no reason to dispute the USGS findings, but found no cause for alarm. Flagging global demand could rebound, she said. Proposed coal ports now stalled on the West Coast could get built. And a rise in oil and gas prices could make coal competitive again.

“The economics might be different from what we know now,” Hill said.

It’s been four decades since its low-sulfur content first made Powder River Basin coal the fuel of choice among electric utilities that needed to cut their sulfur dioxide pollution. Sprawling strip mines in the region have since removed more than 11 billion tons of coal, the equivalent of 95 million loaded rail cars.

To gauge how much coal remains, USGS researchers since 2004 have analyzed the geology from minerals removed by 30,000 holes drilled deep into the earth. The data revealed almost 1.1 trillion tons of coal buried across the 20,000-square mile Powder River Basin. Of that, only 162 billion tons is within coal seams considered thick enough and close enough to the surface to make extracting them worthwhile.

The amount drops even more drastically when the coal’s quality is factored in and compared against current prices. When the USGS data was first compiled, in 2013, Powder River Basin coal was selling for $10.90 a ton, resulting in about 23 billion tons being designated as economically-recoverable.

With coal prices down to $9.55 a ton, the reserve estimate has plummeted to just 16 billion tons, Haacke said. That’s equivalent to 40 years at the current production pace of 400 million tons annually from the basin’s 16 mines in Wyoming and Montana.

Meanwhile, mining costs have trended up. That’s been driven by an increase in the “stripping ratio”—how many tons of earth must be removed to mine a ton of coal—as the region’s thick coal seams curve gradually deeper into the earth.

Before it went bankrupt, Arch Coal saw its profit margin in the Powder River Basin slide from $1.67 per ton to 26-cents per ton, according to company filings with securities regulators. Other companies have reported a similar trend.