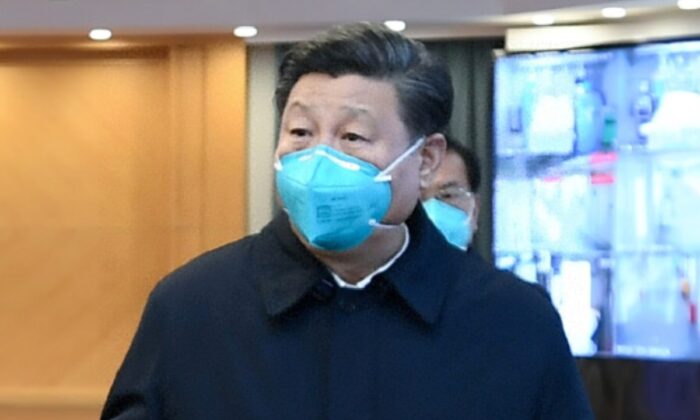 Amid Challenges to His Authority, Xi Appeals for Loyalty

Chinese leader Xi Jinping, whose authority has been badly dented due to his regime’s mishandling of the coronavirus outbreak, has urged Chinese Communist Party (CCP) officials to remain loyal to his leadership.

During a four-day trip to the northwest province of Shaanxi, Xi called for the revival of Maoist-style absolute obedience to the CCP, and warned officials against disregarding Beijing’s orders.

The trip took place amid an ongoing crackdown on Xi’s critics and suspected opponents inside the party, including top officials in the security establishment.

The regime’s disastrous handling of the CCP virus outbreak has weakened Xi’s position within the party and may have emboldened his potential rivals.

On April 20, Xi visited a national reserve in the Qinling Mountains to stress the importance of ecological preservation, but his true intention was unmistakably political.

The area was at the center of a corruption scandal that engulfed Shaanxi’s provincial leadership in 2018 when several senior officials were disciplined for repeatedly ignoring Xi’s directives demanding a full investigation into hundreds of villas illegally built on scenic spots.

Shaanxi must learn lessons from this case, Xi said on Monday, urging officials to “take note of what the central Party leadership cares about and emphasizes.”

Clearly unimpressed with the current crop of CCP apparatchiks, Xi reserved his praise for the older generation.

Visiting the campus of Xi’an Jiaotong University (XJTU) on April 22, he praised university staff who followed the Party’s order in the 1950s and moved from metropolitan Shanghai to the remote northwest.

Jiaotong University was previously based in Shanghai, but the Mao regime moved most of its staff and equipment to Xi’an to support Soviet-sponsored industrial projects in the region.

The essence of the “westward relocation spirit,” according to Xi, is to “listen to the Party’s instructions and follow the Party.”

What he failed to mention was the fact that many Jiaotong University staff members who opposed the relocation were labeled as “rightists” and endured over two decades of persecution as a result.

Partly due to his willingness to listen to dissent over the move, XJTU’s first president, Peng Kang, was purged as an “anti-Party element” and beaten to death during the Cultural Revolution.

At a time when Xi comes under intense pressure from within the Party for his handling of the coronavirus outbreak, his demand for loyalty is not only issued verbally, but also enforced with an iron hand.

Property tycoon Ren Zhiqiang, an outspoken CCP “princeling,” was put under investigation on April 7 after he criticized Xi for mishandling the crisis.

On April 19, just one day before Xi began his Shaanxi tour, Sun Lijun, a vice minister within the Ministry of Public Security, was officially put under investigation. According to the ministry, Sun’s fate was an “inevitable result” of not only his disregard for party rules but also his “lack of respect and awe,” a euphemism for disloyalty toward Xi.

A day later, it was reported that Fu Zhenghua, China’s minister of justice, had stepped down as his ministry’s deputy Party chief, a clear indication that he is facing imminent sacking or even investigation.

Both Sun and Fu previously served as leaders of the “610 Office,” a Gestapo-style body set up by former CCP chief Jiang Zemin to persecute the Falun Gong spiritual movement.

The latest developments, analysts say, may signal another round of purge in the CCP’s security establishment, which has close links to Jiang’s faction, widely known as the “Shanghai gang.”

Speculation has been circulating in the Beijing rumor mill that Meng Jianzhu, the CCP’s former security chief and Politburo member who retired in 2017, may also get implicated. Sun previously served as Meng’s secretary.

Beijing has been claiming that the pandemic calls for international solidarity. But as Xi’s appeal for loyalty and his purge of suspected opponents suggest, the COVID-19 crisis may have split his own Party even further.