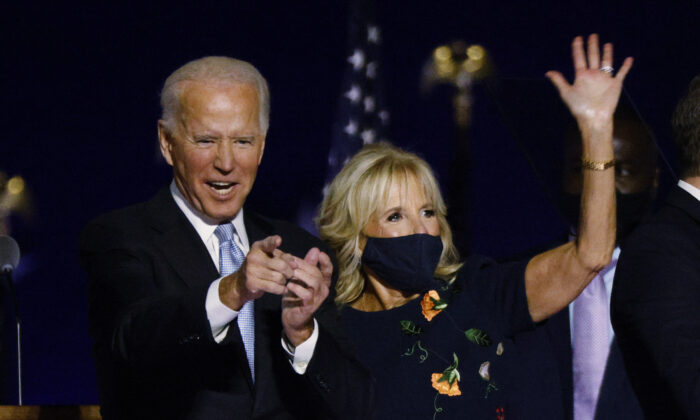 Democratic presidential candidate and former Vice President Joe Biden decided to address the country as “president-elect” on Saturday night despite mounting legal challenges, primarily from the campaign of President Donald Trump, over how ballot counting has unfolded in the hotly contested 2020 election.

“I am humbled by the trust and confidence you have placed in me,” Biden said from Wilmington, Delaware, adding that he would “work with all my heart to win the confidence of the whole people,” referring to Americans who did not vote for him.

Biden, 77,  took the stage in his hometown to address the American people as “president-elect.”

Biden originally planned to give a victory speech on Friday night, but told supporters at the time he was not declaring himself the winner. President Donald Trump, 74, had warned against calling the race based on the unofficial results, saying “I could make that claim also” given the tight counts across multiple battleground states.

But a slew of news outlets just before noon on Saturday called the battleground state of Pennsylvania, which gives the winner 20 electoral college votes, in Biden’s favor.

The Epoch Times is not calling the race until all legal challenges are resolved. No states have certified their vote tallies yet.

Alongside running mate Sen. Kamala Harris (D-Calif.), Biden told supporters late Saturday that the 74 million Americans who voted for him had delivered the Democrat party “a clear victory.”

Vote totals for both Biden and Trump have eclipsed the record number of votes for a presidential candidate set by Barack Obama in 2008.

“You voted and you delivered a clear message,” Harris added. “You chose hope and unity, decency, science, and, yes, truth. You chose Joe Biden as the next president of the United States of America.”

Biden made an effort to address Trump supporters, saying: “It’s time to put away the harsh rhetoric. To lower the temperature.”

“To make progress, we must stop treating our opponents as our enemy,” he added.

Biden inched into the lead in Pennsylvania on Friday. Citing the risk of spreading COVID-19 at polling places, Democrat state leaders pushed for mail-in ballots to be sent to all registered voters for the election, which has seen numerous last minute disputes in battleground states over deadlines for the receipt of mail-in ballots.

After polling places closed Tuesday night, Trump had a sizeable lead in Pennsylvania.

While some states like Pennsylvania are still contesting whether mail-in ballots received after Election Day will be formally confirmed ballots in the election, a record 103 million Americans who voted early by mail will see their mail-in ballots counted in the final results.

Results in Wisconsin, Arizona, Georgia, North Carolina, and Pennsylvania remain up in the air.

The state’s Senate and House of Representatives Oversight committees held a joint hearing on Saturday on the issue, where they voted to issue subpoenas for records from the state Bureau of Elections, which is part of the Department of State, as they probe the election.

The intention behind the subpoena is to see if any voter fraud allegations are true, Senate Oversight Chairman Ed McBroom, a Republican, said during the hearing.

“While the moment is heated right now in the wake of the election … the public right now is at a fever pitch, some of them, of interest, and the opportunity we have to do our jobs, our very legitimate jobs, I don’t think could ever be more intensely needed—the opportunity to repudiate any false allegations that have come forward and to reassure the people of this state of the integrity of our elections, and to potentially if any of these allegations prove true, to rectify those situations, to rectify failures of law or oversights in law, and to make sure that in the future, those things don’t recur,” he said.

State Rep. Cynthia Johnson, a Democrat, accused Republicans of questioning the legitimacy of the election, adding: “I’m very disappointed in not the Republicans but Republican leadership, because this is nothing more than political theater.”

The Epoch Times has reached out to Dominion for comment.