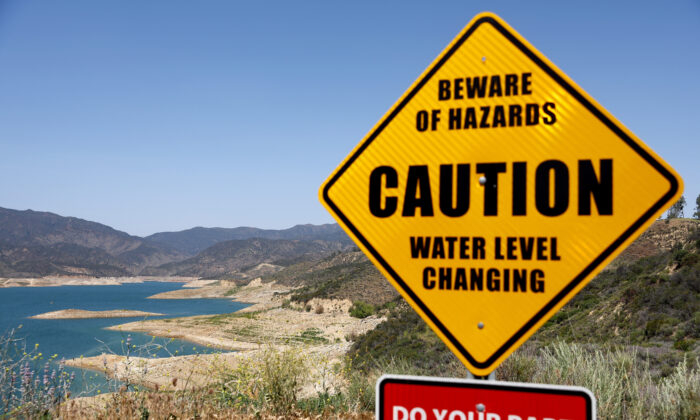 A caution sign is posted at the Castaic Lake reservoir in Los Angeles County on May 3, 2022 in Castaic, California. (Mario Tama/Getty Images)
Southern California

LOS ANGELES—As drought concerns prompt state and city leaders to implement water conservation efforts, a small fish has made its way back to center stage in California’s water wars, with many farmers questioning why millions of acre-feet of fresh water are being sent to the ocean to try to save it.

It’s a multi-decade-long battle that has resurfaced as the state limits many residents’ water use by 20 to 35 percent and restricts outdoor watering to once per week.

However, for four years in a row, beginning in 2017, the fish weren’t detected at all in annual surveys by the California Department of Fish and Wildlife (CDFW). In December, thousands of Delta smelt that were grown in captivity were released into the Sacramento–San Joaquin River Delta by the U.S. Fish and Wildlife Service and the CDFW to see if the species would rebound.

But the push to save the fish from extinction has become a quandary for the state’s farmers, who say the policies created under the Endangered Species Act to protect the smelt are creating more water waste, while draconian regulations on water pumping in the Central Valley significantly limit the amount of water used for farmland.

“How they’re managing the water here just makes you cry,” Steve Jackson, an almond farmer and California Water Board member, told The Epoch Times. “Because they are using the Endangered Species Act to reshape how water is being utilized here.”

Scientists have attributed the decline in smelt to a lack of freshwater outflows, since they spawn in cool, low salinity waters.

As a result, the state requires a certain amount of fresh water to be sent from the San Joaquin River to the Delta and eventually the Pacific Ocean as “unimpaired flows” each year to improve the habitat. According to the San Joaquin Farm Bureau Federation, that will amount to approximately 288,000 acre-feet between Feb. 1 and June 30. One acre-foot contains around 326,000 gallons of water.

Yet these water conservation efforts to try to save the smelt appear to have largely failed.

Jackson said the amount of fresh water that ends up in the ocean is actually much higher, according to independent research.

Nearly 9 million acre-feet of water ended up in the ocean from the Delta between Oct. 1, 2020, and April 30, 2022, according to the Water Agency, Inc., which negotiates farm water transactions in California’s Central Valley.

“We’ve only seen a continual reduction in water that could be used here for farming, into the Delta,” Jackson said. “The continued use of the Endangered Species Act to force policymakers, by litigation or threat of litigation is just creating a huge issue.”

Despite controversial policies being in place for years to protect the smelt, the fish population has continued to decline. In 2015, only six smelt fish were found, and only two in 2017, according to the CDFW. In the 1970s, there were about 1,600 smelt fish recorded.

But the heavy-handed policies on pumping water from the Delta remain, making it difficult and costly for farmers to run business as usual. Environmentalists have determined that pumping water out of the Delta can cause smelt to be trapped and killed.

Erik Wilson, a cotton and alfalfa farmer, has experienced the effects of the smelt protections firsthand.

“It’s been a long time, and there’s been zero improvement for the smelt,” Wilson told The Epoch Times. “We’re talking 30 years now.

“When we have large volumes of water flowing through the Delta, it’s very frustrating as someone in agriculture to see the water just go unused. And it’s water that is free. It’s not going anywhere except the ocean.”

He said farmers like him aren’t the only ones suffering from water loss. Southern California residents “whose water supply and their availability of water is often put on hold because of the smelt situation” are also affected.

Some farmers expected things to change during former President Donald Trump’s time in office, when he signed a memorandum asking federal agencies to cut back on environmental policies limiting the amount of water flow to farmland in the Central Valley.

However, the plan was put on hold amid legal challenges from environmental groups and the state of California.

Kristi Diener, farmer and founder of the California Water for Food and People Movement Facebook group, said restricting the use of water from the Delta to protect the smelt has clear downsides. Not only must farmers leave valuable land fallow, or unsown, the water restrictions force farmers to rely more on groundwater pumping, which leads to subsidence, or the caving in of land, she said.

“We’ve got canals that are sinking, we’ve got the California Aqueduct is sinking, we’ve got roads and bridges and vital infrastructure that’s sinking because of over-pumping, and then you also don’t have any dilution for contaminants in groundwater,” Diener told The Epoch Times.

She said farmers are paying a variety of water costs for a system they’re “not even getting water from.”

Residents in California get their water from a few different channels, including the Colorado River, one of the major sources for Los Angeles residents.

The California Aqueduct—a system of canals, tunnels, and pipelines that transport water originating from the Sierra Nevada Mountains—starts from the Sacramento–San Joaquin Delta, a large inland river delta and estuary in Northern California.

The 444-mile aqueduct carries water to the San Joaquin Valley and Southern California as part of the state’s water management effort. The water is stored in reservoirs before being distributed to local communities.

“So, when you’re hearing all this drought drama about climate change is making it not rain and the temperatures are getting hotter and all that, it’s just a bunch of noise. We had five years’ worth … all of our reservoirs were still brimming. There is no reason why we should have water shortages right now.”

Farmers aren’t the only ones criticizing state water policies. In 2021, California water officials severely miscalculated the moisture content of the Sierra Nevada snowpack, which led to nearly 700,000 acre-feet flowing into the ocean, according to state Assemblyman Adam Gray, who recently asked the state auditor to investigate the state’s water resources department.

“This examination is timely and necessary due to what appears to be a reliance on outdated operational procedures, bureaucratic inertia, or gross incompetence,” Gray, a Democrat, wrote in a March 25 letter to the chair of the Joint Legislative Audit Committee. “These failures have caused significant harm and damage to the health and welfare of every Californian.”

If the state remains in a drought long-term with the continued smelt protections, Jackson said it’s likely that there will be more restrictions put in place by local water officials. Urban areas such as Los Angeles will likely feel the pain of it the most.

“They’ll [implement] an extremely high penalty for use … change the rate, double or triple it, so your bill might go to $300 or $400 a month, and that is what normally will slow people’s consumption, is pain in the pocketbook. That’s the future,” he said.

Both Diener and Jackson claimed that with the way the water is being managed statewide, “we will always be in a drought.”