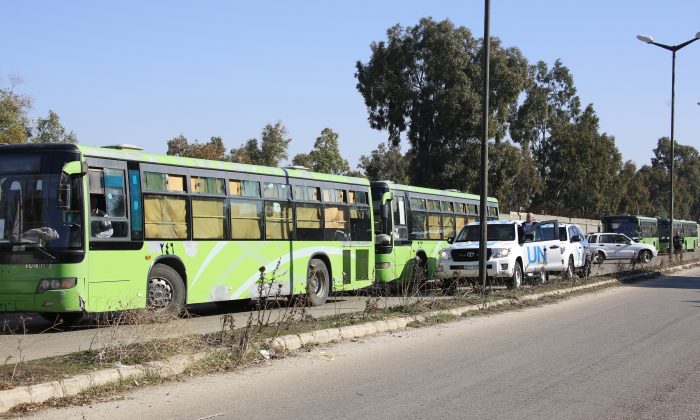 Amid a Local Truce, Syrians Leave Rebel-Held Area in Homs

HOMS, Syria—Hundreds of rebels and their families on Wednesday left the last opposition-held neighborhood of Homs as part of a local truce that will bolster government control of the city, while opposition groups met in Saudi Arabia to forge a united front ahead of proposed peace talks.

The international community is making its most serious push yet for a cease-fire and negotiations to end Syria’s nearly 5-year-old conflict. U.N. and U.S. officials hope the deal that led to the rebels’ evacuation of the Waer neighborhood in Homs can be replicated elsewhere to create pockets of peace and a climate conducive to negotiations.

The monumental size of the task was evident in Homs and at the opposition conference in the Saudi capital of Riyadh.

In Homs, once Syria’s third-largest city and a center of the uprising against President Bashar Assad, there was bitterness and tears as a first group of civilians and insurgents evacuated Waer. A three-year blockade by government forces in the civil war has inflicted untold hardship on those inside.

“This is not a surrender, this deal is a result of three years of siege that has led to a human catastrophe in Waer,” said opposition activist Mohammad Sbai, speaking via Skype from the shattered neighborhood.

Among the rebels who left are hard-line insurgents and members of the al-Qaida branch in Syria, the Nusra Front, who chose to leave rather than stay and cooperate with Syrian authorities on a prolonged truce.

The governor of Homs, Talal Barazzi, told The Associated Press on the outskirts of Waer that 272 gunmen and 447 civilians left Wednesday. A second and final group of rebels will leave in the coming weeks, he said, without elaborating.

Once the evacuation is complete, Homs will return to full government control. The deal comes amid Syrian army offensives in central and northern parts of the country, supported by Russian airstrikes that have improved the position of Assad’s forces.

U.N. and Red Crescent officials were on hand to oversee implementation of the deal. An AP crew saw gunmen civilian boarding buses, their faces covered with scarves to avoid identification. The windows were curtained, but several of the men could be seen peeking out. Some gave the thumbs-up sign.

In one of the buses, a man grinned and waved from a window seat, and a little girl sitting behind him also waved. At least one person missing a leg walked on crutches and was helped onto a bus by paramedics.

The convoy of at least 10 white buses of civilians and seven green buses of gunmen then left Waer. A U.N. vehicle and Syrian army pickup truck mounted with a machine gun drove in between each civilian bus, while U.N. and Red Crescent vehicles bracketed each bus of rebel fighters.

“With this agreement, Homs will now be a safe place free of weapons and gunmen,” Barazzi said.

The Waer deal is similar to one struck in May 2014 in Homs’ Old City. There, the government took control of the quarter after about 2,000 rebels were granted safe passage to opposition areas north of the city. The area was destroyed and thousands of civilians were killed or forced to flee, and rebels surrendered only after they were starved and outgunned.

In Saudi Arabia, Syrian opposition groups and rebel factions opened a meeting with the aim of forming a unified front ahead of the proposed peace talks with Assad representatives.

A peace plan agreed to last month in Vienna by 20 nations set a Jan. 1 deadline for the start of negotiations between Assad’s government and opposition groups.

The stakes are high for the two-day Riyadh meeting, during which the disparate and often competing opposition factions will be held to a tight deadline to agree on the outlines of a political solution to the conflict, as well as on who should represent them in the proposed talks with Assad’s government.

Signs of divisions among the participants quickly emerged, when Ahrar al-Sham, one of the most powerful rebel factions in Syria, released a statement that suggested a compromise vision for the country’s future remains far from reach.

The ultraconservative group objected to the presence of some of the other participants, claiming they are “closer to the (Syrian) regime than they are to the revolution,” and the lack of proportional representation of some of the other Islamist groups fighting in Syria. It did not elaborate.

The group also vowed to “preserve the Islamic identity of our people, as well as the principles of our orthodox religion” and said it will oppose any outcomes of the conference that contradict those principles.

The AP received a copy of the names of the delegates in attendance from a Saudi official close to the talks. The official, who spoke on condition of anonymity because he was not authorized to release the information, said some of the delegates met with Western and Russian diplomats in Riyadh before the talks.

The U.S. and its allies are calling on the opposition to work toward a consensus ahead of the negotiations intended to lead to a transitional period in Syria and Assad’s eventual removal.

Khaled Khoja, head of Syria’s main Western-backed opposition group, the Syrian National Coalition, said a political solution would have to remove Assad as a priority, but also liberate Syria from the “Russian and Iranian occupation.”

He said the Riyadh meeting will determine who really belongs to the opposition.

With about 20 delegates, the Syrian National Coalition is the largest bloc at the talks. Also attending are representatives of the Syria-based National Coordination Body.

Rebel factions include the Western-backed Free Syrian Army, the Saudi-backed Jaysh al-Islam and Ahrar al-Sham—groups that had long rejected any negotiations with Assad’s government so long as he is in power.

Absent are Kurdish opposition factions, such as the People’s Protection Units, known by its Kurdish acronym as the YPG. It’s the main Kurdish fighting force battling the Islamic State group in Syria. However, there are ethnic Kurds at the talks from among the broader opposition groups invited.

The IS group is not represented.

The YPG is participating in another conference in Syria’s northern province of Hassakeh that is unrelated to the Riyadh gathering and led by the U.S.-backed Syrian Democratic Forces, of which the YPG is a member.

In the past year, ties between Saudi Arabia and Turkey have strengthened around their mutual support for Sunni groups fighting Assad’s Iranian-backed government. The decision to exclude Kurdish groups is widely seen as a gesture to appease Turkey, which is wary of Kurdish ambitions for an independent state in the region.

In New York, Britain’s U.N. Ambassador Matthew Rycroft said he expects progress on defining who’s part of the Syrian opposition and who’s “a terrorist” ahead of a ministerial meeting in New York next week of parties trying to end the civil war.

Rycroft told reporters that there also will be a ministerial meeting of the U.N. Security Council on Dec. 18 to adopt a resolution supporting the Vienna process.